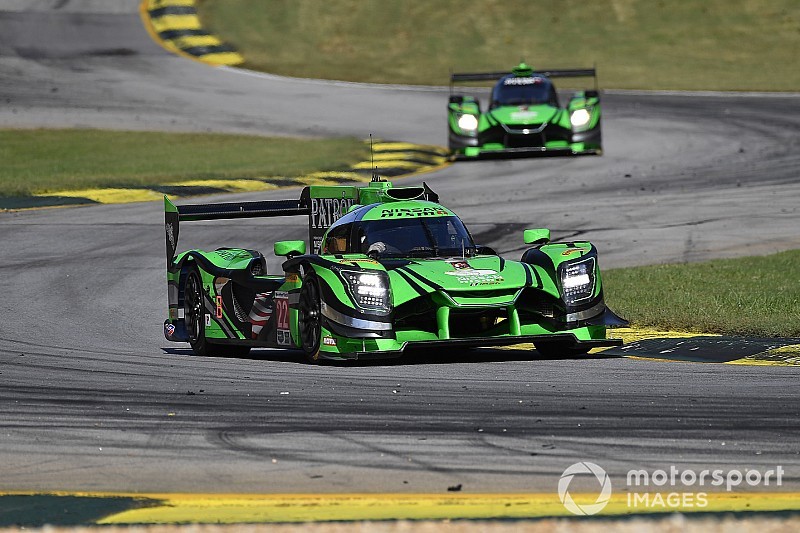 Pipo Derani will start his final race for ESM Nissan from pole position after staving off a double-pronged Mazda attack in Petit Le Mans qualifying.

Derani laid down a 1min10.437sec lap of the 2.54-mile Road Atlanta course, which not only eclipsed teammate Norman Nato by 0.338sec, but also kept him 0.124sec and 0.163sec clear of the Mazda RT24-Ps of Oliver Jarvis and Jonathan Bomarito.

The latter survived a brief off-course excursion in the opening minutes and some ragged moments while the tires were at their prime but came up four hundredths short of his teammate.

Said Derani: "In any race, it’s important to start up front, but this one has a special feeling, especially for myself. This is my last race with the team, and ESM’s last race with Tequila Patron.

"It’s very emotional for the entire team, and it shows how hard we’ve been working the last three years.

"When I joined the team, we had lots of highs. What better way to finish an era than to start on pole?! We still have the race tomorrow, but I’m happy and grateful for the car they’ve given me to get on pole position."

The Acura Team Penske ARX-05 of Ricky Taylor was 0.343sec off the ultimate pace but that was enough to beat the best of the Cadillacs, Filipe Albuquerque’s #5 Action Express Racing entry, for fifth behind the second ESM Nissan.

Lead P2 car was Simon Trummer’s JDC-Miller Motorsports Oreca, which beat Juan Pablo Montoya in the second Acura by a handful of hundreths.

Felipe Nasr claimed ninth in the second AXR Caddy with Colin Braun rounding out the top 10 with the CORE autosport Oreca, 0.634sec from P1.

On the back of two straight GTLM victories, the Rahal Letterman Lanigan Racing-run BMW M8 remained on top during qualifying, with John Edwards grabbing pole with 1min17.006sec to snatch pole from Antonio Garcia’s championship-leading Corvette C7.R by just 0.024sec.

Earl Bamber was a couple of tenths slower in the faster of the two Porsche 911 RSRs ahead of Richard Westbrook in the best of the Ford GTs, while Patrick Pilet will line up fifth, alongside the second Ford of Joey Hand.

Connor De Phillippi was seventh in the second BMW, ahead of Tommy Milner’s best in the #4 Corvette, and Toni Vilander in the returning Risi Competizione Ferrari 488 GTE.

Ben Keating pulled his Riley Mercedes AMG GT off track mid-session, while Wright Motorsports didn’t even participate in the session in order to start the race on a fresh set of Continentals.