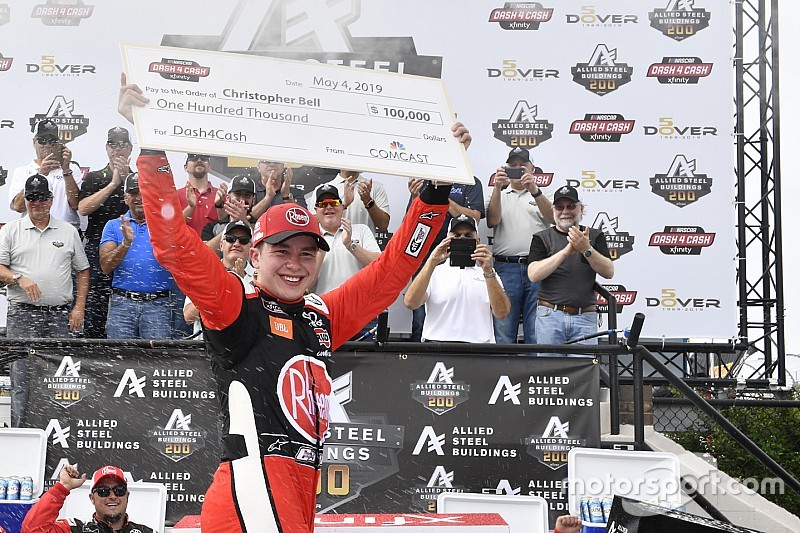 Cole Custer dominated much of the Allied 200 at Dover (Del.) International Speedway, but Bell came off pit road first with 45 of 200 laps remaining.

Despite two more cautions and the ensuing restarts, Bell was never seriously challenged for the lead and held off Justin Allgaier for the win and the $100,000 Dash4Cash bonus that came with it.

The win is Bell’s third in the NASCAR Xfinity Series this season and 11th of his career.

“Over the last couple of races we’ve had great cars but we haven’t been able to capitalize on it,” Bell said. “This one is really thanks to my pit crew, man. They did a great job, getting me out front where I could control the restarts.

“I knew if I could get out front, we’d be tough to beat. This place, you can pass on long green-flag runs and it’s one of my favorite race tracks because you can move around and try to find different lines and get going.

“But over the short run, it’s pretty difficult to make something happen because there is so much grip on the bottom (lane). I’m just really thankful for everyone at Toyota, they are the ones who believed in me since Day 1 on the dirt side of things and he we are holding up my second giant cardboard check.”

Reddick was third, Custer ended up fourth and Briscoe completed the top-five.

With 50 laps remaining, Custer’s lead over Bell was less than a second with Reddick running in third. All of the lead-lap cars still have to make one final pit stop for fuel.

On Lap 154, Kaz Grala, running 12th, spun off Turn 2 after some contact with John Hunter Nemechek to bring out the first non-stage caution of the race.

Bell was the first off pit road and took over the lead. On the restart on Lap 160, Custer lined up second followed by Reddick and Allgaier.

With 30 laps to go in the race, Bell held a small lead over Allgaier, followed by Custer and Reddick.

A caution was displayed with 25 laps to go when Riley Herbst spun off Turn 4 and down the frontstretch. Bell remained in the lead on the restart on Lap 181, followed by Allgaier, Reddick and Custer.

Gray Gaulding and Vinnie Miller wrecked on Lap 182 to bring out another caution. On the restart with 14 laps to go, it was Bell, Allgaier, Briscoe and Reddick.

Custer continued his dominating performance, leading all 45 laps to take the Stage 2 victory over Bell.

Following the break between Stages 1 and 2, Custer was the first off pit road, followed by Allgaier, Bell, Reddick and Brandon Jones. The race returned to green on Lap 55.

During the stops, Michael Annett, Grala and Nemechek were penalized for speeding on pit road and had to restart from the rear of the field.

With 30 laps remaining in the stage, Reddick had moved up to second and Bell was in third.

Custer had built up a 2.7-second lead over Reddick with 15 laps to go in the stage. Bell remained in third.

Bell finally was able to maneuver around Reddick to take second-place with six laps remaining. Custer had built his lead to almost four seconds.

Custer led every lap on his way to the Stage 1 victory over Bell; his third stage win of the season.

Allgaier was third, Reddick was fourth and Austin Cindric completed the top-five.

Custer, the pole-winner, moved out to a 1.2-second lead over Bell through the first 10 laps of the race.

On Lap 18, Ryan Sieg was forced to pit under green for a loose wheel.

With 25 laps remaining in the first stage, Custer maintained a solid lead over Bell. They were followed by Allgaier, Reddick and Cindric.

With under 15 laps to go in the stage, Noah Gragson got in the wall but was able to continue on and there was no caution.

Bell had cut his deficit to Custer to under a second with five laps remaining in the first stage, Allgaier remained in third but was beginning to challenge Bell for second.

Prior to the race, Gragson and Josh Bilicki had to start from the rear for unapproved adjustments to his car after qualifying.

Christopher Bell is still learning but "winning is not a problem"