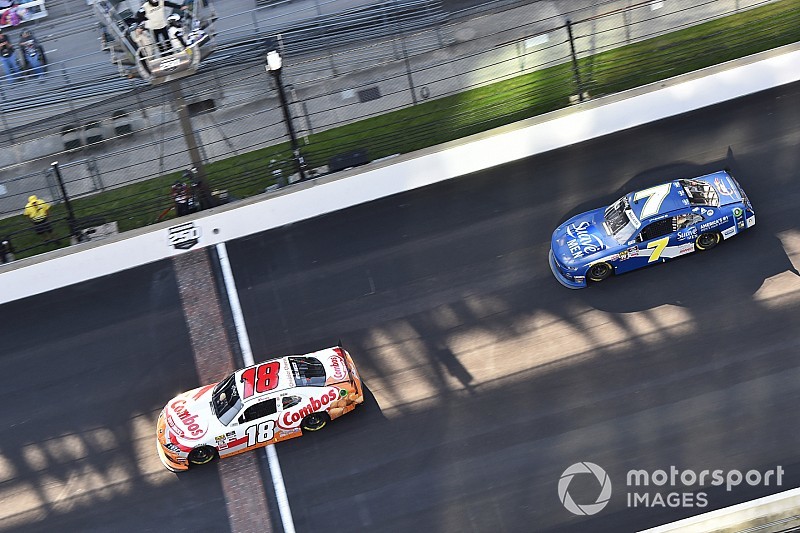 Justin Allgaier tried to deny him, but Kyle Busch made it a fourth trip to Victory Lane in the Xfinity Series at Indianapolis Motor Speedway.

Busch got a good jump on the field on a restart with four of 100 laps remaining in Saturday’s Indiana 250 and Allgaier stayed close but could not catch him to attempt a pass.

Allgaier’s most recent win in the series had come in this race one year ago.

The win is Busch’s fourth in the series this season in just seven starts and 96th of his career.

“It was really tough to pass even when you had a run on a guy. You could pass the guys who were set up for long-runs on the straightaways but some of those other guys like (Christopher Bell, Brandon Jones) and the JGR guys, they were stupid fast,” Busch said.

“We got back in traffic and just really fought the handling of this thing and got stuck around fourth-place. I’m real proud of this team. This Toyota Supra was awesome today and glad we got to take it to Victory Lane.”

John Hunter Nemechek slammed into the Turn 1 wall on Lap 78 to bring out a caution. All of the lead-lap cars elected to pit with Haley the first off pit road thanks to a two-tire pit stop.

On the restart on Lap 85, Haley was followed by Allgaier, Tyler Reddick, Busch and Christopher Bell.

Reddick got around Haley to take the lead through Turns 3 and 4. One lap later off Turn 4, Bell used a similar move to move into the lead on Lap 87.

Brandon Jones spun after contact with Austin Cindric on Lap 88 to bring out another caution. The race returned to green with eight laps remaining.

Coming off Turn 2 after the restart, Reddick and Bell made contact racing for the lead, sending both crashing into the wall and bringing out another caution. Busch inherited the lead as NASCAR displayed a red flag to clean the track of debris.

The race returned to green on Lap 97 with Busch out front, followed by Allgaier, Burton, Cindric and Gragson.

Allgaier got around Busch with seven laps remaining and held him off to take the Stage 2 win.

Reddick was third, Burton fourth and Jones rounded out the top-five.

Following the break between Stages 1 and 2, most of the lead-lap cars elected to pit for tires and fuel but Busch stayed out and retook the lead.

On the restart on Lap 36, Busch was followed by Gragson, Allgaier, Bell and Haley.

Brandon Brown spun out in Turn 3 on Lap 36 and several cars dove to the pit entry lane to avoid wrecking. “I’m not even sure what happened out there,” Brown said over his radio. “The car just jumped out.”

Bell went to pit road under the caution to check on damage from contact with Gragson on the previous restart.

On the restart on Lap 41, Busch was followed by Allgaier, Gragson, Haley and Nemechek.

With 10 laps remaining in the second stage, Busch held a small but steady lead over Allgaier. Burton was third, Gragson fourth and Reddick fifth.

On Lap 53, Allgaier got around Busch on the inside to take the lead for the first time in the race.

With five laps to go in the stage, Allgaier quickly opened up more than a second lead over Busch.

Jones held off Cindric in a four-lap shootout to the finish to take the Stage 1 victory. It’s his third stage win of the 2019 season.

Gragson was third, Busch was fourth and Custer ended up fifth. Ryan Sieg spun on the last lap of the stage but was able to continue on.

Busch, who started on the pole, took command early and maintained a small but steady advantage over Bell through 10 laps. Jones ran third, Reddick fourth and Allgaier fifth.

On Lap 13, Austin Dillon fell way off the pace on the backstretch with what his team believed was a fuel pressure problem.

NASCAR eventually put out a caution on Lap 14 when it looked like Dillon would not be able to make it back to pit road unassisted. Some lead-lap cars elected to pit but Bell remained on the track and took over the lead on the restart on Lap 20.

Busch was among those who elected to pit but had to come down pit road twice in order to make sure lug nuts on his tires were secure. He restarted 24th.

With 10 laps remaining in the first stage, Bell had a small advantage over Reddick as Jones ran third.

On Lap 21, Allgaier moved into the second spot and began trying to challenge Bell for the lead.

David Starr blew the engine in his No. 52 Chevrolet on Lap 53 to bring out another caution. Several more lead-lap cars elected to pit during this caution, including Bell and Allgaier.

On the restart on Lap 27, Jones led the way followed by Cindric and Gragson. Busch lined up fifth.

Before the race, four cars had to start from the rear of the field – Ronnie Bassett Jr., Josh Bilicki and B.J. McLeod all for unapproved adjustments, and Kyle Weatherman for an engine change.

Briscoe: "We can surprise a lot of people" in Xfinity playoffs

Elliott Sadler's last Xfinity race will be one to remember