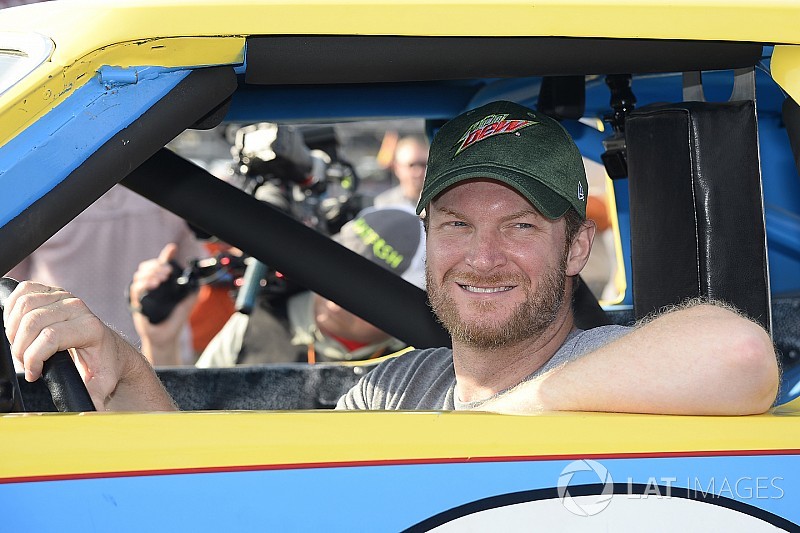 Dale Earnhardt Jr.’s final race at Talladega (Ala.) Superspeedway won’t likely be remembered for the result but more for the experience.

While Earnhardt for the most part avoided the mass of accidents that plagued Sunday’s Alabama 500 and remained in contention for the win, he ended up with a disappointing seventh-place finish.

What he won’t forget is the weekend of memories, which included the roar from the crowd when he won the pole for the race, the 1980 Chevrolet Monte Carlo race car gifted to him which was previously raced by his father and the throngs of fans that filled the grandstands Sunday to watch his final restrictor-plate race.

“I thought the car had enough to win before we bent the splitter down, and it was a great car all weekend. This has been a hell of a weekend for me, and I’m glad to be able to finish and finish well. That means a lot to me,” Earnhardt said.

“I know a lot of folks came and traveled here to see us run, so I know they’re disappointed we didn’t win, but I’m glad they got to see us run the whole event, and hopefully they enjoyed it.”

Talladega has been Earnhardt’s most successful track in the Monster Energy NASCAR Cup Series with six career victories, including four in a row at one point. The same was true for his late father, Dale Sr., who amassed 10 Cup wins at the track.

“I really do owe a lot to this track and the support that we have had here from the fans, owe a lot to them. You know, it just has been a very fun place,” he said. “A lot of great memories here, and then obviously the career in Cup here, four in a row, all those things mean a lot to me.

“I hope to always have a great connection here, and trust me when I say that whatever the track needs from me, anytime they want anything, I’ll be here to help promote and support this place no matter what the request is.”

Earnhardt started on the pole and led once for seven laps. He got caught up in a multi-car accident on Lap 152 that left his No. 88 Chevrolet with some front-end damage and he narrowly avoided suffering even more damage in at least two other multi-car wrecks late in the race.

Still, Earnhardt found himself lined up third on the final restart with three of 188 laps remaining, one of only 14 cars still on the track at the finish.

“I wish we could have seen what we could have done with a straight car at the end,” he said. “We tried to push Brad into the lead, but the splitter was on the ground so bad, we got disconnected, and everyone literally went right around us.”

“It was downhill from there.”

Earnhardt, who will retire from full-time NASCAR competition at season’s end, said he hopes his performance this weekend at Talladega showed there was no quit in his Hendrick Motorpsorts team.

He missed most of the second half of last season recovering from a concussion suffered earlier in the year at Michigan.

“I think that anyone who questions our desire to be here and compete this year and our desire to run hard and race can look at the risks that we took this afternoon, knowing that any of those crashes would have probably given me a bit of an injury that would have held me out of the rest of the season,” Earnhardt said.

“It’s hypothetical, but I think it says a lot about being out there and competing, wanting to compete, showing that we want to compete, and working hard, racing hard. This was one that I was worried about, you know, in the back of my mind, I was a little concerned.

“But you can’t win the race if you race scared, and I’ve raced scared here before, and you don’t do well when that happens, so you have to block it out and just go out there and take the risks and hope that it’s just not your day to get in one of those accidents.