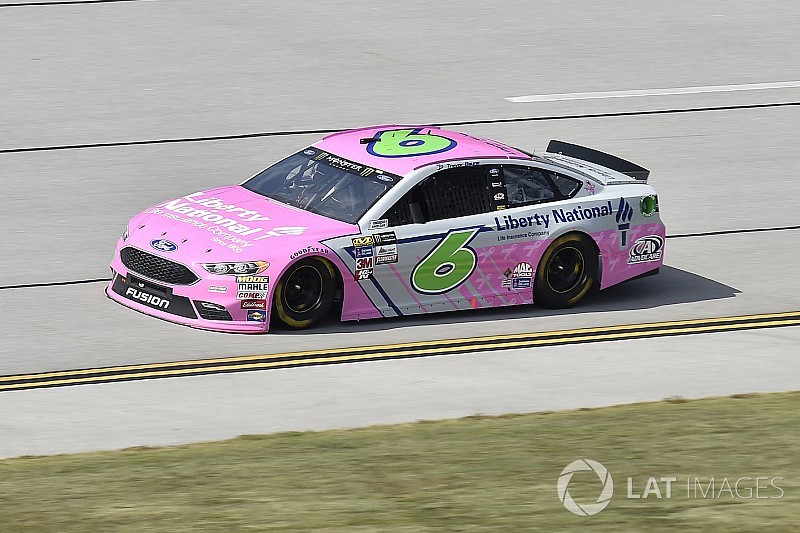 Trevor Bayne was involved in at least two accidents, ran up front and in the back but left Talladega (Ala.) Superspeedway Sunday with his season’s-best finish.

Bayne actually found himself with a chance to win Sunday’s Alabama 500 as he lined up eighth on the final restart with just three of 188 laps remaining.

“You had about a one in eight shot of winning if you were still on the race track,” Bayne said after finishing a season-high third. “It’s hard to make passes when there are only eight guys around because you can’t get runs.

“I was blown away we got such a big run going down the frontstretch coming to the checkered (flag) – it just doesn’t happen with a small group like this.”

Not only was it a small group fighting at the finish but nearly every car on the track also had some damage from a previous incident on the track.

“My guys did a good job of fixing the damage,” he said. “We couldn’t have been back out there with speed if they didn’t assess it. We got a red-flag to be able to look at everything and they did a great job getting the work done, getting it back on track.

“We just survived better than everybody else.”

Bayne’s Roush Fenway Racing teammate, Ricky Stenhouse Jr., won twice in the Monster Energy NASCAR Cup Series this season and remains in the hunt for the championship in the NASCAR playoffs.

Bayne has had an up-and-down season and his finish Sunday was just his second top-five and fifth top-10 finish of the season. Bayne’s previous best finish this year was a fifth at Bristol, Tenn., in August.

“People will say, ‘Well, there were only eight cars really racing at the end’ but there were a lot of times this season when we had a fast car that didn’t get a result because we were wadded up,” Bayne said. “It’s nice to see it come back around.

“We’re still fighting hard to the end. We’re still looking for a win this year and I’m trying to do everything I can to help my teammate in the playoffs.

“At the end of the day, I want to get a win for this No. 6 car and start to build for next year.”