Max Angelelli, Jordan Taylor and Ryan Hunter-Reay drove the No. 10 Velocity Worldwide/Wayne Taylor Racing Corvette DP to a second-place finish in the Rolex 24 At Daytona.

Q: Chip was just in and admitted that, yeah, you want to leave a little bit in your pocket when you're testing, but where they found speed was with the rear wing. That's where they picked up all their speed. We are not rookies. I mean, what else can I do? It's so obvious, so unfair. What else? 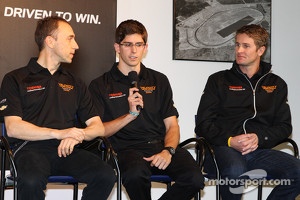 Max, to play off that a little bit, talk us through a little bit at the end of the race there, did you think there was anyway that you could stick with Montoya or even get by him for the lead? We were hoping with a strategy to make it to the end and beat them in the fuel, with the fuel. So we didn't change tires at the kind of I had many, many laps on my tires, and we were hoping just to make it like that with the strategy and get the win.

But Montoya and the 01 car is another league, is an A class. We are B class. Anyway, we are very happy, our Velocity Worldwide car Corvette performed very well.

Do you still have a good explanation as to why your engines were restricted? Well, I wanted to ask you that. I need an answer because there is no explanation. There's no point. Everybody could see it yesterday, the day before yesterday, today. I don't understand. It makes no sense. This is not competition. I am competing against myself, and there's no chance.

After last year the difficulty with the engine failure, is there any redemption in coming back at all? Are you able to get any celebration or joy? We celebrated after the 22nd minute when we made it after the 22nd minute. We were very happy. It's been a great day for us, thanks to Ryan and Jordan, a perfect job. They did a perfect job, and our team, our crew, they made it happen. It's thanks for them, for their strategy, their pit stop. They never made a mistake?

So we're talking about the cars? Yes, the car.

JORDAN TAYLOR: I think a comparison could be when Brumos won the 24 hour and Ganassi finished second. They had the same complaints.

Jordan, can you talk about your first outing with this team and what it meant to you to finish so well? Yeah, it was good. It was cool being with Ryan and Max, of course, just to have drivers like that to learn from and compare to. As for the race, it was definitely a learning experience, it was my first time really being thrown in with all the GT cars trying to hold you off, but every stint felt better and better and I was feeling more comfortable.

I think the team said that it was the first time they'd ever run this race and not had to go to the garage, so I think that says some good things about us for not putting a wheel wrong, but it goes to the team for preparing the car to not have one little issue for 24 hours.