A splash of fuel costs the Alex Job Racing No. 23 WeatherTech Porsche a podium spot in the Rolex 24

DAYTONA BEACH - After 24 hours it came down to mere minutes for the No. 23 WeatherTech Porsche. Damien Faulkner had to pit the 23 black and white Porsche with just three minutes remaining in the 51st running of the GRAND-AM Rolex 24 at Daytona for a splash fuel giving up a possible podium finish and settling for sixth in GT. 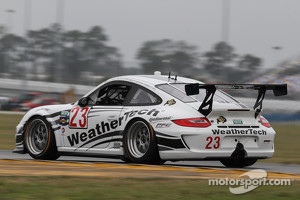 Faulkner (Ireland), Jeroen Bleekemolen (Monte Carlo), Marco Holzer (Gemany) and Cooper MacNeil (Hinsdale, ILL) ran at the front of the GT field from their 15th place starting position. The WeatherTech drivers had victory in their sites when they went into fuel save mode with an hour to go. Without the help of a late race caution and the fast pace of the GT pursuers, the team was forced to pit the car in the waning moments to splash it with fuel, resulting in a sixth-place finish.

"I am disappointed for his team," Faulkner said. "Alex Job Racing and WeatherTech are used to winning, that is what they expect and that is what I expected when they asked me to drive with them. We were really close. The team was telling me to save fuel and then the pack was coming and I had to switch maps and pick up the pace. We just didn't have enough fuel to make it, disappointing."

Bleekemolen was driving flat-out to keep pace with the faster cars in the class.

"The car was pretty good for me in my last stint," Bleekemolen said. "It is hard to fight the Ferraris. We get by them in the infield and then on the banking they just drive right by you again. The Audi we are competitive with, the Magnus car is really fast down the straight as well. We had to really manage the car at the end. We had to stop for gas with two laps to go and that cost us a podium finish."

"This is a tough race to win," MacNeil said. "We did our best to win, but we just came up slightly short. The top six or eight cars are really close. There were always a half dozen cars on the lead lap the whole race. We didn't have any mechanical issues, just gas, oil and a fresh driver. There's always next year."

Holzer liked the way the team performed and the car held up all race.

"I was in the car a long time this morning with the fog delay," Holzer said. "We were able to gain some places in the morning and we had a chance to win the race. When I was in the car last the engine and transmission were near perfect, so we had a good car for the 24 hours. We had to go for it at the end of the race and we had to splash with gas late. That cost us the race."

Alex Job, team owner, had the Porsche in a position to win when it counted. "We were right there with the WeatherTech Porsche," Job said. "We had to manage the fuel at the end, but the field was really coming and we had to go. It ended up we needed a splash with just two laps to go. The GT field was so competitive. There were always six or eight cars on the lead lap the whole race. We ran really fault free. It just didn't go our way at the end."

McNish vows to return after enduring disappointment in Daytona “classic”