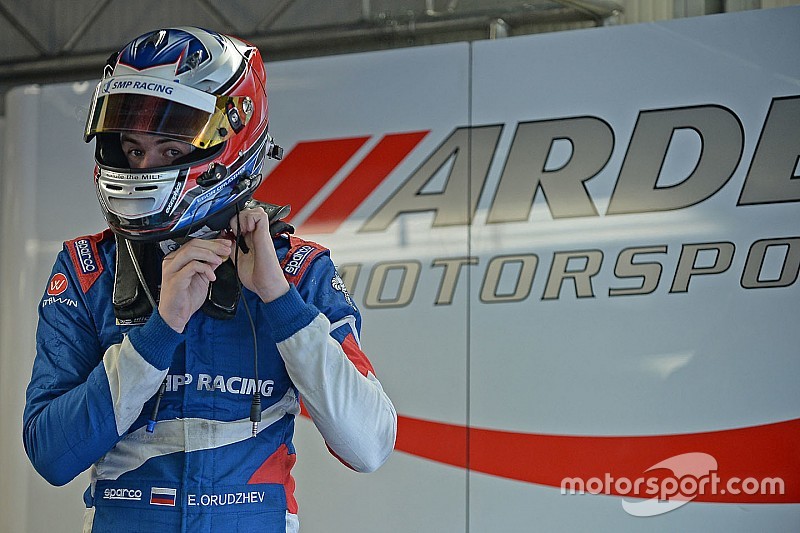 Arden's Egor Orudzhev took his fourth victory of the Formula V8 3.5 season in the Sunday race at Jerez, as Renault junior Louis Deletraz moved to the lead of the standings.

Deletraz, who had briefly taken the points lead yesterday only to lose it due to a post-race penalty, headed fellow Renault protege Jack Aitken by just 0.003s for Sunday pole, Aitken producing another impressive qualifying performance in his debut F3.5 round.

But neither got a particularly good launch off the line. Instead, it was Orudzhev, lining up in fifth, who excelled at the start, the Russian then making a dash to the outside line into Turn 1 to overtake Deletraz for the lead.

Over the opening stint of the race, Deletraz ran right behind Orudzhev, unable to create an opportunity - but the Swiss driver then found himself in clean air when Orudzhev opted to make his mandatory stop early, on lap six.

Deletraz picked up the pace, staying out until lap 10 and continuing to go faster than Orudzhev even after the Russian had emerged on fresh tyres.

Despite that, the Renault junior came out of the pits further behind his rival than he had been over the opening laps, Orudzhev helped by a fast pitstop by his Arden crew.

Over the remainder of the race distance, Deletraz could not get within a second of Orudzhev, settling for runner-up.

The pair of them proved an utterly dominant force in the race, as third-placed Matthieu Vaxiviere ended up 15 seconds adrift.

Having slipped to fourth at the start, Aitken held off Beitske Visser after the mandatory stops, the Dutch driver picking up her best finish of the season in fifth.

Saturday race winner Matevos Isaakyan was sixth, with Rene Binder making the most of a late-stop strategy to take seventh.

For erstwhile points leader Tom Dillmann, it was a race of damage limitation after the Frenchman had qualified in 13th.

He made his stop at the earliest opportunity on lap five and ended up finishing eighth, with teammate Alfonso Celis and Yu Kanamaru making up the top 10.

With just the two Catalunya races left to run in the season, seven drivers have a mathematical chance of the title.

Deletraz, with 200 points, heads Dillmann at 199, with Vaxiviere another 24 points adrift.

Aurelien Panis, whose car broke down early on in the race, and Roy Nissany, who stalled on the grid and went almost lap down, are at 171 and 169 points respectively.

Orudzhev at 166 and Binder at 155 make up the contenders.