The eight-time Monte Carlo winner managed to stave off his charging Toyota team-mate Kalle Rovanpera to extend his overall lead to 17.2 seconds with two stages remaining at the alpine asphalt classic.

Hyundai’s Thierry Neuville held onto third position despite suffering a half spin and hybrid issues during Sunday morning’s loop.

The Belgian was 38.1s behind Ogier but comfortably clear of the fourth-placed Toyota of Elfyn Evans, who also lost time to a spin.

M-Sport’s Ott Tanak elected to save his tyres for the rally-ending powerstage and remained in fifth ahead of Takamoto Katsuta (Toyota), Dani Sordo (Hyundai) and Esapekka Lappi (Hyundai).

After witnessing Rovanpera slash his lead on Saturday afternoon to 16.0s, Ogier issued a response on Sunday’s first stage.

The Frenchman blitzed the 18.82km Luceram - Lantosque test to claim his eighth stage win of the rally, beating Rovanpera by 2.7s in the process to halt the Finn’s charge. 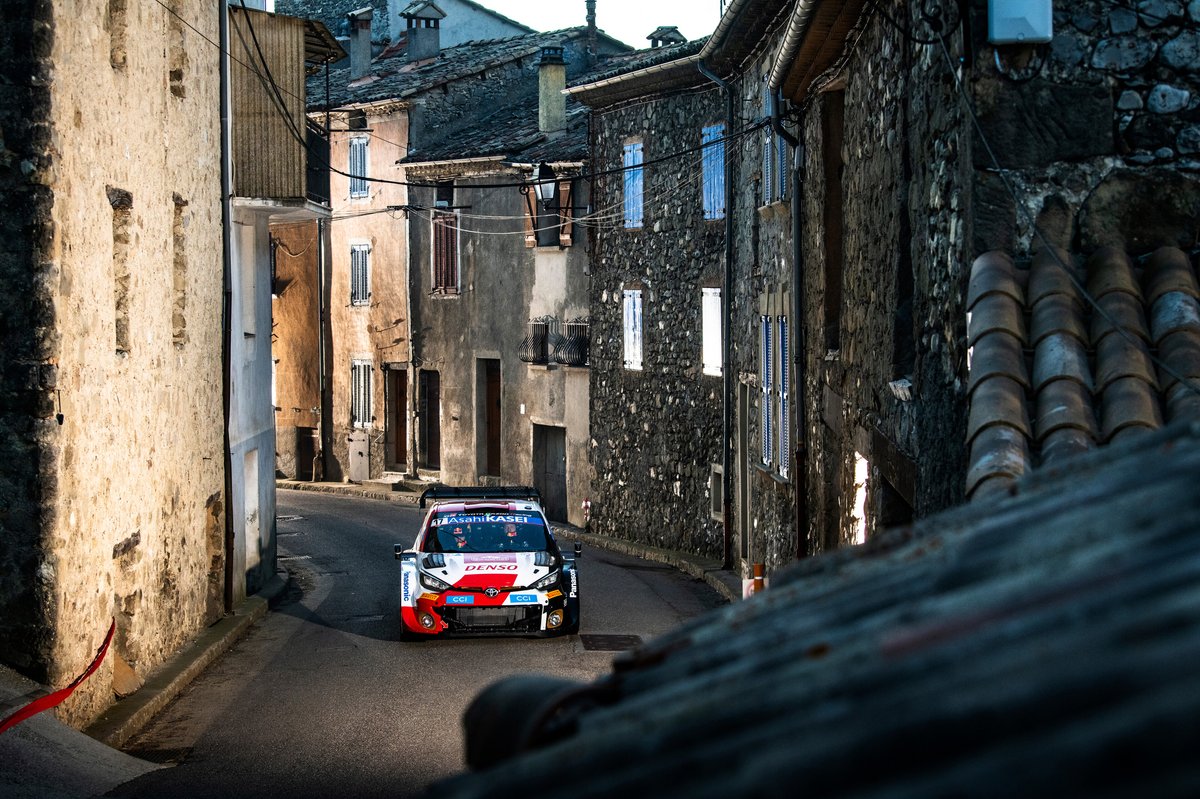 "Yesterday night it looked like people were in doubt, but so far I am controlling my risks,” said Ogier.

“It's very precise driving required between the mountains and stones, but at least no cuts where there is a risk of punctures.”

There was plenty of drama for his rivals. Neuville was lucky to avoid contact with the barriers following a half spin at a hairpin left which he attributed to a hybrid mapping issue.

His Hyundai team-mate Sordo also suffered from the same hybrid issue that afflicted him on Saturday, and was also handed a 10s jump start penalty, which initially dropped him to eighth in the overall standings behind the site Hyundai of Lappi.

However, officials rescinded the penalty after a fault was found with the countdown clock at the stage start

After an encouraging Saturday, Lappi struggled for confidence behind the wheel of his i20 N and was unable to challenge Sordo.

Meanwhile, M-Sport's Pierre-Louis Loubet, who rejoined the rally after Saturday’s retirement, was without the use of his handbrake which caused him to drop almost two minutes. The issue was resolved for the next stage.

The final stage of the loop belonged to Rovanpera but he was unable to completely regain the time he lost to Ogier on the famous Col de Turini stage (Stage 16). The world champion pipped Ogier by 1.5s, with Neuville third-fastest, a further second back.

There was a small drama for Evans who suffered a half spin at tight hairpin left but it wasn’t enough to have any real effect on the overall standings.

"At the tight hairpin it was as if something had broken for a split-second" said Evans.

"I came off the throttle and it spun completely around - it took me completely by surprise and I had to stop and reverse. I took it a bit easy then for the rest of the way up."

In WRC2, Nikolay Gryazin managed to hold onto his lead but the Skoda driver had only a 9.7s advantage over Citroen’s Yohan Rossel.

Crews will tackle a second pass through the stages to conclude the rally later on Sunday.