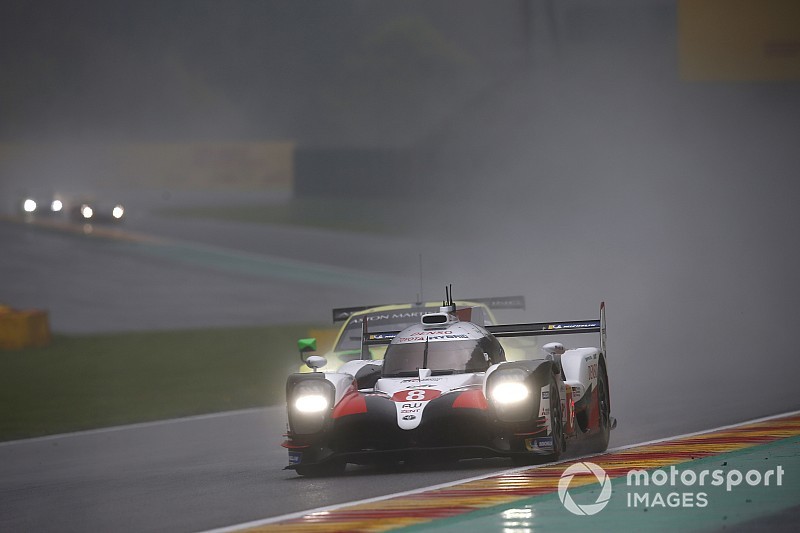 Fernando Alonso topped the times for Toyota in a rain-affected second free practice session ahead of this weekend's Spa round of the FIA World Endurance Championship.

The Spaniard posted a 2m19.483s just before the 90-minute session was interrupted by the third of four red flags, which coincided with the rain intensifying.

Alonso's time in the #8 Toyota TS050 Hybrid put him more than a second up on the sister car driven by Mike Conway, who ended up second on 2m20.865s.

The SMP Racing squad, which had been fastest in dry conditions during opening practice, ended up third in the times with a 2m21.429s from Vitaly Petrov aboard the #11 BR Engineering BR1.

SMP's second BR1, in which Sergey Sirotkin set the pace in the morning session, didn't post a time after Stephane Sarrazin aquaplaned off the track approaching the fast Blanchimont left-hander early in the session.

The two Rebellion-Gibson R-13s ended up fourth and fifth in the hands of Neel Jani and Gustavo Menezes respectively.

The ByKolles team's revised ENSO CLM P1/01, now powered by a Gibson V8 engine, topped the times early on in Tom Dillmann's hands, but end up in sixth position.

Pastor Maldonado ended up fastest in LMP2 aboard DragonSpeed's Oreca 07.

His 2m27.682s set on Michelin tyres was more than a second and a half up on the second-placed TDS Oreca of Matthieu Vaxiviere on Dunlops.

The Dane posted a 2m32.648s aboard the #95 Aston Martin Vantage GTE early in the session, which put him just over two tenths up on Gianmaria Bruni's factory Porsche 911 RSR.

The second Aston was less than a tenth back in third with Alex Lynn driving.

GTE Am was led by the Proton Dempsey Porsche driven by Matt Campbell.