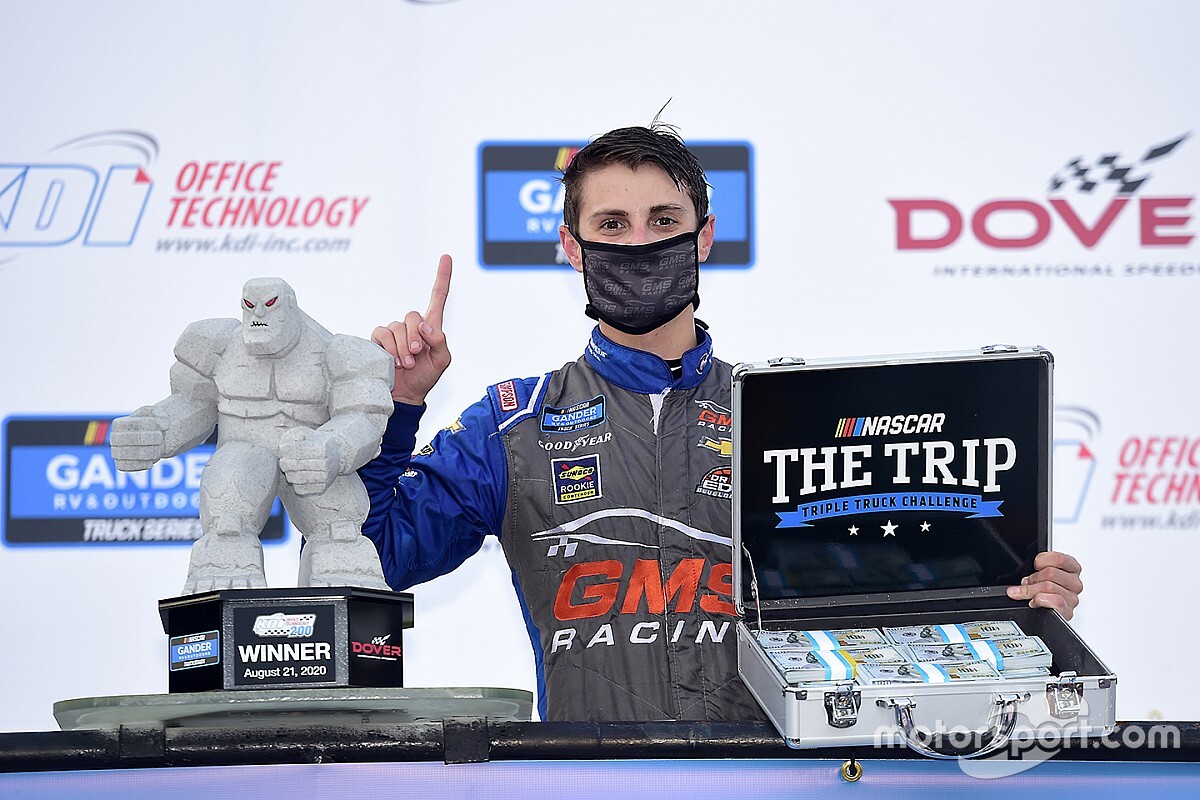 Upstart Zane Smith held off veteran Matt Crafton in a three-lap shootout to win his second NASCAR Truck Series race in the past three races.

Smith cleared Brett Moffitt – who tied with Smith for most laps led in the race (50) – on the restart with three of 200 laps remaining and then kept Crafton at bay to win Friday night’s Truck Series race at Dover (Del.) International Speedway.

The win is the second of his career with both coming in the last three races.

Smith’s victory also comes with a $50,000 bonus as part of the Triple Truck Challenge. The final race of the challenge is next weekend at Gateway.

“Man, I love this place. It’s just so damn cool,” Smith said. “I’ve been wanting that (Monster) trophy so bad. Hopefully, I can pay off my Chevy Silverado.

“I just had an awesome truck. I think we all know I suck at restarts but I picked a good time to have a good one. Man, two wins – this is by far the most fun I’ve ever had racing in my car.

“I’m just blessed to be here.”

Following the break between Stages 2 and 3, all led-lap trucks pit with Zane Smith the first off pit road. On the restart on Lap 98, Smith was followed by Christian Eckes.

Eckes got a big jump on the field on the restart and moved into the lead for the first time with Gilliland taking over second and Zane Smith dropping to third.

With 75 laps remaining in the race, Eckes remained out front but was receiving a stout challenge from Moffitt and Zane Smith.

On Lap 130, Moffitt got around Eckes to move back into the lead.

With 60 laps to go, Moffitt and Zane Smith battled side-by-side battle for the lead but Moffitt was able to withstand Smith’s challenge and remain out front.

On Lap 155, Zane Smith was finally able to get around Moffitt and regain the lead.

With 39 laps remaining, Moffitt was the first of the contenders to make a green-flag pit stop to take on tires and fuel to make it to the finish of the race.

Once the round of stops was completed on Lap 167, Zane Smith cycled back into the lead with more than a second lead over Moffitt and Crafton in third.

With 10 laps left in the race, Zane Smith had built a more than 1.5-second lead over Moffitt while Crafton remained third.

On Lap 192, Friesen spun around off Turn 2 and brought out a caution. Most of the lead-lap trucks remained on the track.

Zane Smith led the way on the restart with three laps to go followed by Moffitt, Crafton and Sauter.

Zane Smith collected the Stage 2 win under caution when teammates Eckes and Chandler Smith got into each other with two laps remaining.

Following the break between Stages 1 and 2, several teams elected to pit but Chandler Smith stayed out and inherited the lead.

On the restart on Lap 53, Smith was followed by Rhodes and Sauter.

With 20 laps to go in the second stage, Chandler Smith had built up more than a second lead over Kraus with Zane Smith in third.

Kraus moved in behind Chandler Smith and began challenging him for the race lead with 12 to go and on Lap 80, Kraus used lapped traffic to dive inside of Smith for the top spot.

Zane Smith got around Kraus to grab the lead for the first time with three laps to go and shortly afterward, Eckes and Chandler Smith made contact in Turn 4, sending Smith into a spin.

Rhodes and Creed also got collected in that incident, which brought out a caution and ended the stage.

Hill built a solid lead over Crafton and held on for the Stage 1 win, his second stage victory of the 2020 season.

Ankrum was third, Zane Smith fourth and Moffitt rounded out the top-five.

Moffitt, who started on the pole, led the way early until a caution was displayed on Lap 7 after Tate Fogleman spun in Turn 3.

The race restarted on Lap 12 with Moffitt still out front followed by Hill and Crafton.

A competition caution was called on Lap 21 to allow teams to check tire wear. Several drivers pit but Moffitt stayed out and remained in the lead on the restart on Lap 26.

Crafton and Hill pulled away from Moffitt on the restart with Crafton grabbing the lead but one lap later Hill powered around Crafton to claim the top spot.

With five laps remaining in the first stage, Hill had built a 1.3-second lead over Crafton followed by Ankrum, Zane Smith and Moffitt.