Will the Closer come through at Dover? 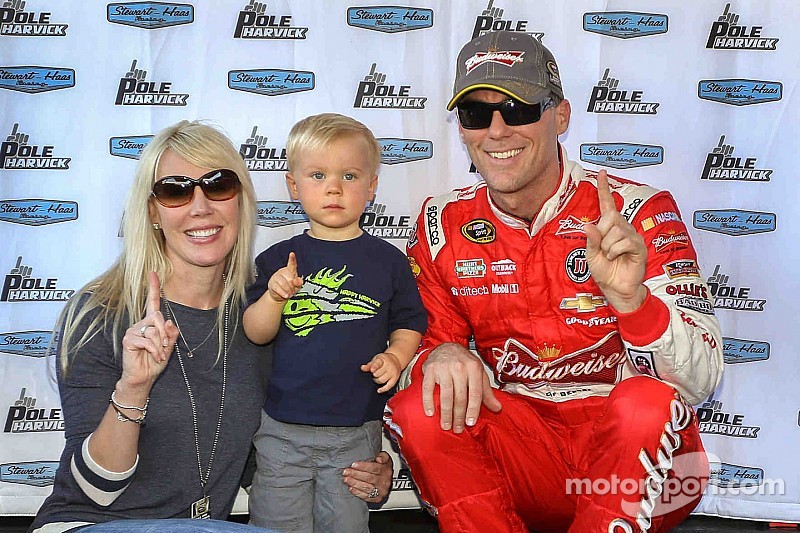 DOVER, Del. – Kevin Harvick was fastest in qualifying and topped the speed chart in Happy Hour on Saturday at Dover International Speedway.

I feel like we have a much better foundation when we unloaded set-up wise here.

“There is a lot going on with the Chase and everything that we are racing for and they just keep bringing fast race cars to the race track,” Harvick said of the No. 4 Stewart-Haas Racing team. “Qualifying went well.  I thought race trim practice went well. We just have to keep doing what we are doing and hopefully we can evolve a little bit more.

“I feel like we have a much better foundation when we unloaded set-up wise here (on Friday) and it just evolved quicker on each run in practice when you unload well.  It’s a lot of fun.”

Still, Harvick has just three top five finishes at the Monster Mile. His most recent – and best finish here to date was a second-place result in June 2012. Although Dover used to be “a huge hurdle” for Happy, he’s come to terms with the Monster.

“The last race we were leading and a lugnut got behind the center of the wheel and knocked the inner liner valve stem out of it leading the race,” said Harvick, who finished 17th in June. “You would classify that one as dumb luck, but we have had some bad days here.

"It’s been a long time I would say ’05 in that area was not pretty, but over the last few years this has been a good race track for us.  It has been a lot more enjoyable and fun to drive.”

Keselowski started on the pole and finished second here in the spring. Despite Keselowski fast lap in practice, he acknowledged, “This is a really hard place to practice.”

“The concrete changes so much during the race,” Keselowski said. “We’re trying to stay in front of it and I think Paul Wolfe and everybody on the Wurth Ford Fusion team is working hard on it, but you can see how loose the car gets in traffic and on the cement, but we’re working through those things and trying to make our car the best it can be.  I think we’ll have a great shot at it come Sunday.”

Still, with wins for both Keselowski and his Penske teammate Joey Logano in the first two races of the Chase and instant passes the next round, there’s nothing to worry about entering Sunday’s race.

Dover is one of those race tracks that you either love it or hate it.

“Dover is one of those race tracks that you either love it or hate it,” says Logano, who qualified 16th. “Thankfully for me, I love this place. I love coming here. It’s something that suits my driving style and I’ve been able to figure out in the last few years what I need to be good in the race.”

With four wins and an average finish of 11.7 in 43 starts at Dover, Gordon is also confident entering the AAA 400. But after cutting a tire and finishing 26th last week at Loudon, the four-time Cup champion doesn’t have the cushion he once enjoyed.

We have to perform at a high level like we’ve been doing all year to make it to the next round.

“We have to perform at a high level like we’ve been doing all year to make it to the next round,” said Gordon, who starts fourth.

While the pressure will be on come Sunday, Gordon, who is seventh in the point standings, has a 13-point advantage over eighth and ninth-place Matt Kenseth and Carl Edwards. Drivers from 10th (AJ Allmendinger) to 16th (Aric Almirola) are separated by just 12 points.

“We had a really good Cup car in practice,” Almirola said. “Some of the things I learned today in the Nationwide race (13th) we’ll have to try and compensate for that for the race tomorrow.

“I’ll talk to Trent (Owens, crew chief) tonight, but I feel really good about it and I’m excited about tomorrow.”

Spotted in the Garage

Tony Raines has been enlisted to spot for Marcos Ambrose in his final 10 races for Richard Petty Motorsports.

The journeyman racer was working with RPM as a driver coach for Dakota Armstrong, when the spot opened on the No. 9 Sprint Cup team.

Raines, 50, competed in NASCAR’s top three tours from 1997 until last season. He has four wins in 54 truck starts, 15 top fives and 52 top 10s in the Nationwide Series and three top 10 finishes in Cup.

Raines replaced veteran spotter Rocky Ryan, who moved over to the No. 51 HScott Motorsports team and driver Justin Allgaier.

That’s what he said…

After tangling with Joe Gibbs Racing teammate Matt Kenseth on Lap 188, Busch and the No. 18 team fought back to salvage an eighth-place finish and vault from eighth to fifth in the point standings.

When asked if earlier adversity prior to the Chase prepared the team for his Loudon comeback, he replied, “That’s why I wrecked five, six weeks in a row leading up to the Chase, was to give them plenty of opportunity to know how to fix it. So they certainly knew what they were doing when we got to Loudon, and I certainly give them props for that.”

All joking aside, Busch, who rolls off second on Sunday in the Dover 400, added “I was really pumped up, really impressed with our guys and what we were able to do there.”

Stress to the third power

Tire stem knocks Kevin Harvick out of contention at Dover