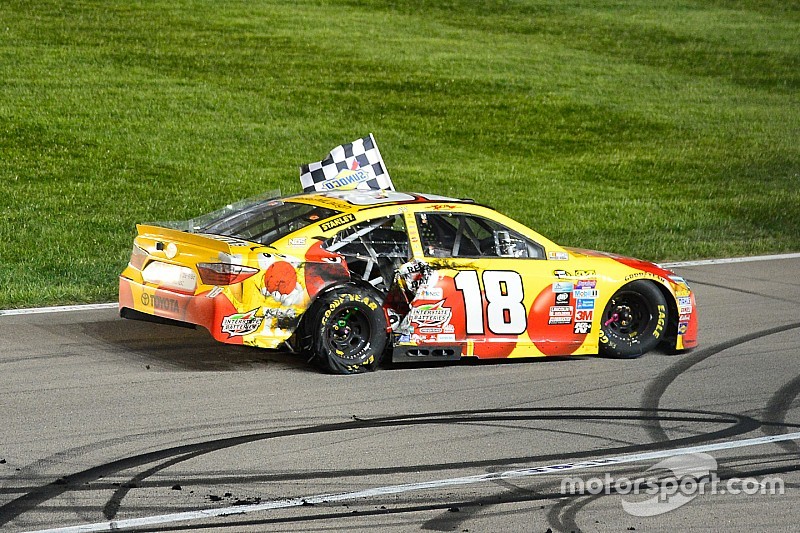 Joe Gibbs Racing has been hammered by NASCAR after working on the wrong side of the recently implemented lug nut policy.

Kansas race winner Kyle Busch will lose crew chief Adam Stevens and his front tire changer for one race after violating NASCAR's strict new lug nut policy. Both have been placed on probation for the remainder of the calendar year.

Along with the suspension, Stevens has been fined $20,000. It is a P3 level penalty, corresponding with what NASCAR said would happen if any team tried to get around the new rules.

Sources told Motorsport.com that all lug nuts were glued on but not all five were hit by the pit gun.

When Motorsport.com asked NASCAR series director Richard Buck if teams thought there was some wiggle room with the rule, even though the sanctioning body made it clear there wasn't, he said the following: "That is correct. Our expectation is that each wheel needs to be on securely and attached with five lug nuts.

"That's their side of it to try to gain that competitive edge, but we were crystal clear with this one. Have been since the start. We've made it very clear to everybody. This is not an area we will compromise with.

"We also said that we'll employ the resources we have now, but we are pushing hard as we always do to employ technology and resources to continue to expand and improve on that. So we have a big push behind the scenes and you should see some stuff continue to roll it with all our inspection process.

"When you're dealing with safety, we take that extremely seriously."

Joe Gibbs Racing will not appeal

Joe Gibbs Racing announces today it will not appeal the penalty issued by NASCAR earlier this afternoon to its No. 18 team.

The 18 team utilized unaltered stock lug nuts during Saturday night’s NASCAR Sprint Cup Series race at Kansas Speedway and each wheel had all five lug nuts attached to the wheel at the conclusion of the race.  The team does acknowledge that not all lug nuts were tightened to the wheel.

RCR throws back to the early 1980s with Darlington schemes