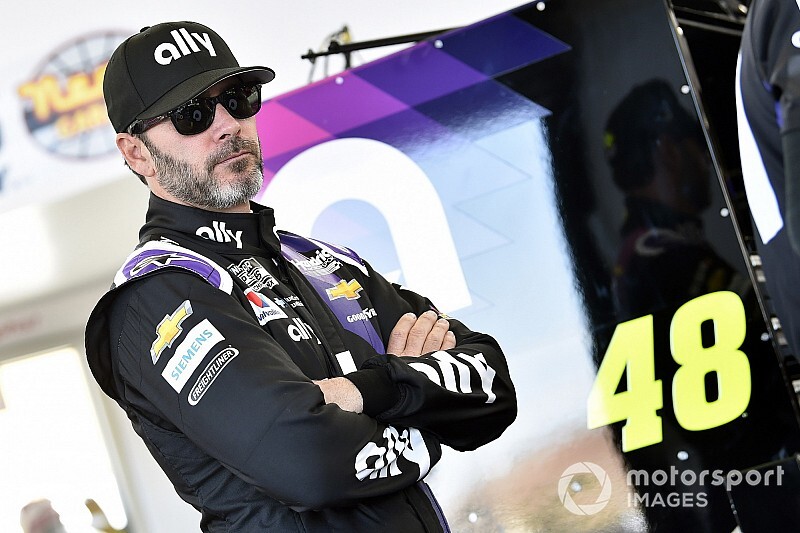 Auto Club Speedway in California is the track that launched Jimmie Johnson’s incredible run of success in the NASCAR Cup Series.

Can it also be the track that returns him to Victory Lane in his final fulltime season?

On April 28, 2002, in just his 13th career start in the Cup Series, Johnson registered his first victory, leading the final 14 laps and holding off Kurt Busch to do so.

A NASCAR record-tying seven series championships and 83 career victories later, Johnson – a native of El Cajon, Calif. – rolls into Auto Club Speedway this weekend for his final start. He will retire from fulltime competition at season’s end.

The track has gone out of its way to make Johnson’s visit a special one, including inviting his wife, Chandra, and daughters Genevieve and Lydia to wave the green flag to start Sunday’s race.

In addition, Johnson will lead fellow competitors in a five-wide salute to the fans during the pace laps and iconic motocross racer and Johnson’s childhood friend, Ricky Johnson, will serve as the honorary pace car driver.

“This is certainly a different one for us and my family. I am very thankful that the track came to us with that suggestion to get my family up there in the stands. I think pre-race will be full of emotions,” Johnson said Friday.

“They will have a chance to come across the stage with me and be introduced with their responsibilities. Being a part of the five-wide salute at the front of the field, and then see those hands up there in that flag stand is going to be cool.”

But the most important thing Johnson could take away from his final competitive weekend at California would be a victory. Johnson, 44, remains immersed in a career-worst 97-race winless streak and ending it is his No. 1 priority right now.

Asked what it would mean to win this weekend, Johnson didn’t mince words, “It would be insane. Home track, first win, you could just go down the list of meaningful talking points that could come out of it.

“The way last weekend went with the speed that we had in our Hendrick cars and the way mine drove, I’m very optimistic about this weekend and it would just be incredible to pull that off if we could.”

Outside of Dover, Del., Auto Club Speedway is probably one of the best places Johnson could arrive primed for a victory.

He leads all drivers with six career wins at the track and has an average finish of 7.6 in 25 career starts on the 2-mile oval.

Hendrick Motorsports, and Johnson in particular, have seemed to benefit from the new model Chevrolet Camaro introduced in the offseason. All four teams have been competitive in the season’s first two races.

“We ran in the top-10 and the top-five most of the day (at Las Vegas). And the car, honestly, responded well to adjustments through the weekend,” Johnson said. “So, with all the new things we have that are going on, it was really just a deep breath.

“It’s like, ‘All right, we’re in a way better place than we were leaving Vegas last year at this time.’ So, it’s just a relief and we know we still have a ton of work ahead, but we’re not panicked or overly stressed about what we have in front of us.

“We can just be calm and relaxed and get to work.”