Denny Hamlin hangs on for Pocono win in two-lap shootout 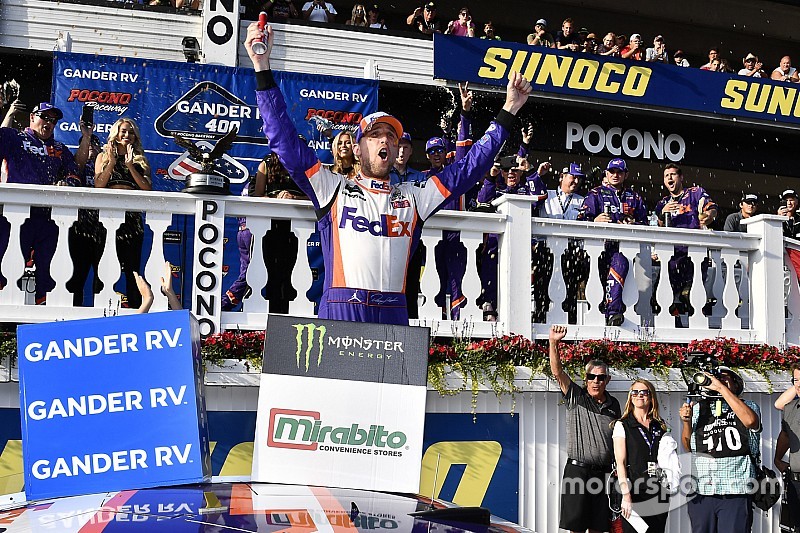 With nearly everyone close on fuel as Sunday’s Gander RV 400 went to overtime, Hamlin was able to fight off a charge from Kyle Larson and Jones and hang on for victory at Pocono Raceway.

The win is Hamlin’s fifth at the track but first since 2010. It’s his third win of the season.

"I was really worried, really worried," Hamlin said of his fuel situation in overtime. "We just did a great job with the car. Once we lost the track position there to (Truex) and (Jones), I thought it was over, we weren't able to pass them.

"Thanks Pocono for putting in this PJ1. I was able to use it there, get around those guys.  Thanks, everyone, for this FedEx Camry. I think we're on a roll this year."

Asked if he and his No. 11 Toyota were "rising to the occasion," he said: "We're running our best right now.  No doubt about it. We are just going to keep plugging along. That's all I can say.  We're doing the best we can."

Hamlin said heading into the NASCAR playoffs he wanted to know his team was a "race winner" and the last two weeks have answered that question.

"You want to know that you can contend for wins. Yeah, you're looking for momentum, but you're just looking for wins week in, week out," he said. "So proud of this FedEx Ground team for giving us yet another winner two weeks in a row.

"I tell you, we really fought for it last week and came up short. Feel goods to redeem ourselves this week and have such a strong car."

Following the break between Stages 2 and 3, some of the lead-lap cars elected to pit but Harvick remained on the track and took over the lead when the race returned to green on Lap 104.

He was followed by Joey Logano, Truex, Hamlin and Austin Dillon.

Hamlin got a big run off Turn 1 and was able to get around Harvick to take the lead in Turn 2 for the first time in the race.

With 50 of 160 laps remaining in the race, Hamlin had built almost a 2-second lead over Logano as Harvick remained in third. They were followed by Jones and Larson.

On Lap 114, Ryan Preece slammed into the Turn 1 wall to bring out a caution. All of the lead-lap cars elected to pit except Kyle Busch and her took over the lead.

On the restart on Lap 119, Busch was followed by Jones (who was first off pit road with a 2-tire stop), Hamlin, Truex and Daniel Suarez.

After 120 laps, Kyle Busch held a small lead over Jones. They were followed by Truex, Keselowski and Hamlin.

With 30 laps remaining in the race, Busch had opened a 1.4-second lead over Jones as Truex remained in third, nearly 4 seconds behind the leader.

Jones moved into the lead on Lap 135 as Kyle Busch was forced to pit to get enough fuel to make it to the end of the race. Truex moved into second and Hamlin third. Kyle Busch dropped to 25th after his pit stop.

Many drivers were going to be close on gas as the race wound down to 20 laps remaining. Harvick, who had taken 4 tires on his last stop and was saving fuel, had worked his way back up to fourth.

On Lap 147, Harvick moved into third and was told he was good to go on fuel and to challenge the leaders.

Josh Bilicki stopped on the track on Lap 153 which forced NASCAR to throw a caution. When the race returned to green with four laps remaining, Hamlin led the way followed by Truex, Harvick, Jones and Keselowski.

As the field came off Turn 2 on the restart, Kurt Busch squeezed Ricky Stenhouse Jr., who took advance and got into Busch, turning him into Michael McDowell as the race returned immediately to caution.

The cleanup forced the race into a two-lap overtime. On the restart, Hamlin led followed by Jones, Truex, Larson and Harvick.

Erik Jones: "It's a bummer" to come so close to another win