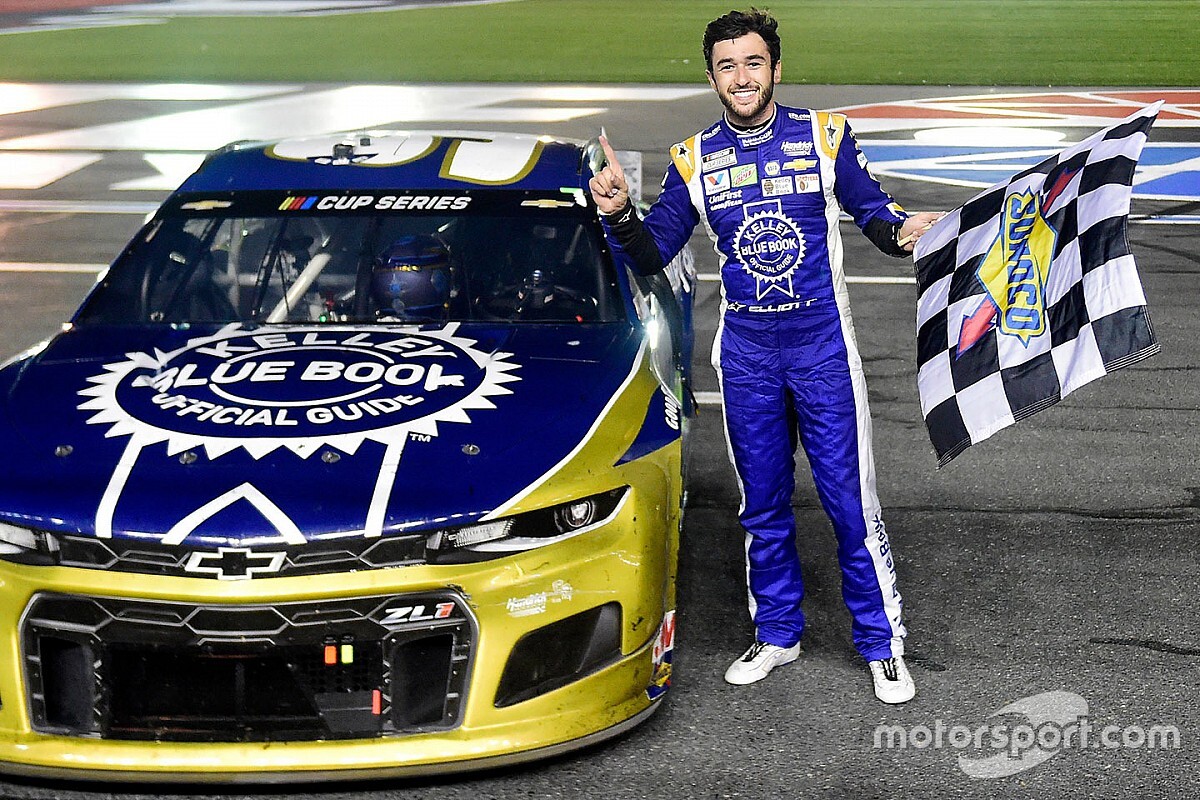 After losing out on the opportunity on victories in the final laps of the last two NASCAR Cup Series races, Elliott gained redemption, holding off Denny Hamlin to win Thursday night’s Alsco 500k at Charlotte Motor Speedway.

Michael McDowell went spinning into the frontstretch grass off Turn 4 on the final lap but Elliott had already crossed the finish line to lock up his first series win of the 2020 season.

The win is seventh of Elliott’s career and first on Charlotte’s oval track. He won last fall on the Charlotte Roval.

"It's feels awesome. It's been a tough week for sure," Elliott said. "We've had some tough losses but that deal on Sunday night (in the Coca-Cola 600) was a heart-breaker. It's not the Coke 600 but any win in the Cup series is really hard to get. I just really appreciate everybody at Hendrick Motorsports across the street here. Everybody's been working really hard.

"I appreciate my team. Alan (Gustafson, crew chief) made a great call there at the end to get tuned up. Luckily, the run went long and I think that fell in our favor."

Asked about the last 10 laps, Elliott said, "I was just waiting for the caution to come out. If the caution didn't come out, I was thinking I was probably going to break something or I was going to crash. After the last last couple weeks, surely it was going to go green until the end. Hopefully we're back on the right path."

Following the break between Stages 2 and 3, the lead-lap cars pit with Alex Bowman the first off pit road. Clint Bowyer was penalized for speeding on pit road and had to restart from the rear of the field.

On the restart on Lap 123, Bowman was followed by Logano, Harvick, Blaney and Elliott.

Harvick powered around Bowman on the outside coming off Turn 4 on Lap 126 to take the lead as Elliott moved into third.

With 75 laps to go, Harvick held a small lead over Bowman. Elliott remained in third, followed by Blaney and Logano.

On Lap 136, Bowman was forced to pit under green for repairs after he slapped the wall of Turn 4. When he returned to the track he was in 33rd and a lap down.

A caution came out on Lap 144 after Timmy Hill got into the Turn 4 wall. The lead-lap cars all pit with Harvick the first off pit road. Erik Jones was held a lap for pitting outside his pit box.

On the restart on Lap 150, Harvick was followed by Hamlin and Blaney.

Elliott got around Blaney and moved into the runner-up position behind Harvick on Lap 155.

With 35 laps remaining, Harvick maintained a small lead over Elliott with Blaney in third and Stenhouse moved into fourth.

With 27 laps to go, Elliott got around Harvick in lapped traffic in Turn 2 to take the lead for the first time in the race.

Blaney got around Harvick for second place with 22 laps to go as Elliott maintained his lead.

With 10 laps to go, Elliott held a 1.6-second lead over Blaney as Stenhouse moved up to third.

Bowman stayed out on a pit stop and cruised to the Stage 2 victory over Blaney.

Following the break between Stages 1 and 2, all the lead-lap cars elected to pit with Logano the first off pit road. On the restart on Lap 63, Logano led the way followed by Blaney and Harvick.

On Lap 65, Kyle Busch got a left-rear flat after going four-wide in Turn 2 and was forced to pit under green for fresh tires.

Harvick got around Logano on Lap 66 to move into the lead for the first time in the race. After pitting, Busch was in 38th and two laps down.

On Lap 74, Brennan Poole got into Quin Houff, who then tagged the wall and brought out a caution. Several cars elected to pit under the caution with Jones the first off pit road.

On the restart on Lap 79, Bowman – among those who stayed on the track – led the way followed by Logano and Blaney. Jones, the first of those who pit, restarted 15th.

With 30 laps remaining in the second stage, Bowman maintained a small lead over Logano with Blaney in third.

After 95 laps, Bowman’s lead had expanded to 1.5 second over second-place Blaney. Logano dropped to third and Elliott had moved up to fourth on fresher tires.

With five laps remaining in the second stage, Bowman held a more than 2-second lead over Blaney as Logano remained in third.

Logano held off teammate Blaney to claim the Stage 1 win that included a 75-minute red flag for rain and lightning. It was his second stage win of the 2020 season.

Byron started on the pole due to an invert but DiBenedetto quickly grabbed the lead on Lap 1 as a wrecked erupted involving Garrett Smithley and Joey Gase to bring out a caution.

On the restart on Lap 10, DiBenedetto was followed by Byron and Bowman. Byron quickly powered back around DiBendetto after the restart to reclaim the lead.

NASCAR put out a competition caution on Lap 21 to allow teams to check tire wear. Most lead-lap cars pit with Byron the first off pit road.

Both Hamlin and Bowyer were penalized for speeding on pit road and had to restart from the rear of the field. On the restart on Lap 25, Logano led the way as he elected not to pit.

On Lap 29, Matt Kenseth spun to bring out another caution. Keselowski also had to pit with a flat tire as he dropped multiple positions trying to get to pit road. During the caution, the race was placed under the red flag for lightning in the area.

The race returned to yellow around 9:10 p.m. ET and several drivers elected to pit under caution including Keselowski, Bowyer, William Byron and Christopher Bell.

The race returned to green on Lap 35 with Logano in the lead, followed by Blaney and DiBenedetto.

With 15 laps remaining in the stage, Logano held a 1.3-second lead over DiBenedetto as Blaney moved into the third position.

Aric Almirola was forced to start the race from the rear of the field for improper adjustments made to his car during impound.