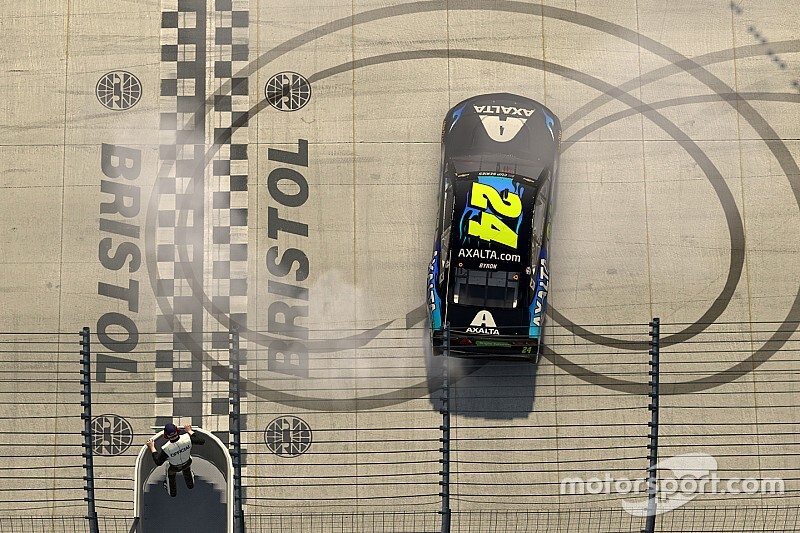 William Byron is a longtime sim racer but said the eNASCAR Pro Invitational Series races present tough challenges because of the vastly different skill sets of his competitors.

Sunday’s 150-lap race from virtual Bristol (Tenn.) Motor Speedway was marred by a dozen cautions and several retaliatory on-track incidents, one of which forced the disqualification of drivers Kyle Larson and Daniel Suarez.

As they did in a race for drivers from other NASCAR series on Saturday night, race officials ultimately decided to move to single-file restarts to help reduce the number of cautions.

Still, Byron was able to lead 114 of the 150 laps on his way to his first win in the eNASCAR competition.

The racing at virtual Bristol appeared vastly more aggressive than the previous two weeks, which featured races at the virtual Homestead-Miami Speedway and Texas Motor Speedway.

Asked to what he attributed the hot tempers, Byron said, “I think the easy excuse is to say, ‘Oh, it’s a game’ and all that, but at the end of the day, everyone is racing, and seeing how much time some guys have put in, I know that it means something to them.

“You’ve got to race. It’s race craft, and I feel like race craft is the same no matter what you’re racing; whether it’s on a computer or at the dirt track or at an asphalt race, it’s the same.

“Obviously some of the guys further back were obviously causing some wrecks and stuff. So you just have to get through that and try to keep yourself clean through the race.”

Typically in iRacing competition, drivers earn ratings that go from 1,000 to 9,000 (Byron's iRating being above 6000), with the higher the rating, the more proficient the driver. So when he typically competes on his own, Byron runs with other drivers at a similar skill level and normally competes in the top split races.

The Pro Invitational Series set up by NASCAR during the coronavirus pandemic allows any of the Cup Series drivers to enter so long as they have the necessary equipment to do so, which produces a wide-range of skill throughout the field.

“I usually race with guys that are around that range or better, and so you’ll have less cautions or you’ll have more quality of race craft, and I feel like when we put our race together, it’s a wide variety of experience levels, so I think that’s just tough to kind of manage,” Byron said.

“I try to use iRacing because it improves my race craft, and I feel like we’ve been doing a good job of promoting it the right way. We just have to make sure that everyone understands that there are races that you can do on there, and I try to do those races and not just run laps of practice by myself.

“The races that you can practice on kind of help improve my race craft, and that’s why I use it to try to help me on the real car.”