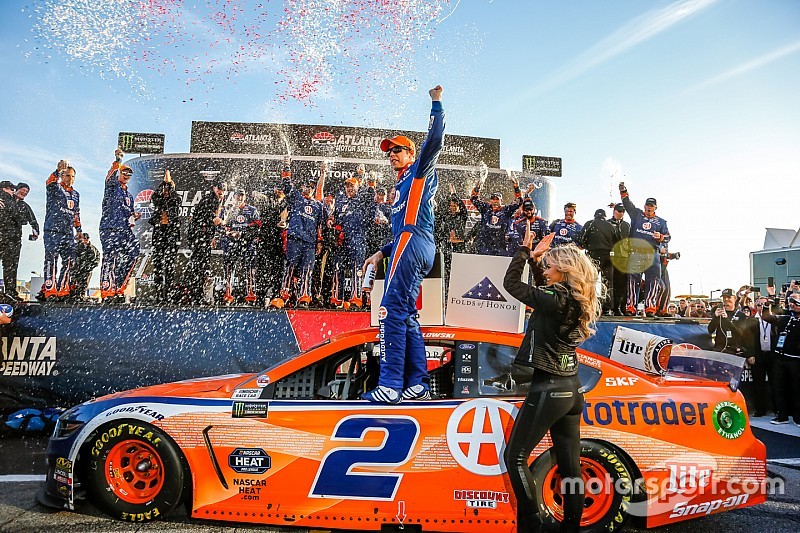 Brad Keselowski faced a bunch of obstacles this weekend but emerged with his first Monster Energy NASCAR Cup Series victory of the season.

After a sub-par qualifying effort on Friday and battling flu-like symptoms the past two days, Keselowski rallied on Sunday to hold off Martin Truex Jr. and claim the win in the QuikTrip 500 at Atlanta Motor Speedway.

The win is Keselowski’s first of the season, second at Atlanta and 28th of his career.

"I was good enough to get the job done," Keselowski said in Victory Lane. "First I have to give credit to first, my wife (Paige) who was sick like I was. She took care of me just like everybody did in the care center. I couldn't be here right now without you.

"And second, Doug Yates, we over a piece of debris with probably 50 laps to go and overheated really bad and I thought there was no way this engine would make it to the end. Doug Yates and his team, they do a great job. I'm pretty sure it's all used up, Doug, but it's in Victory Lane."

The victory also made Keselowski the winningest driver (60 wins total) for team owner Roger Penske. He was tied with Mark Donohue (59) coming into this race.

"This is one I'm not going to forget for a very long time," he said. "Any win means a lot but that's a big number. Now, I get to wear that yellow Mark Donohue helmet. We're going to wear it next week.

"What a tremendous honor."

Following the break between Stages 2 and 3, all of the lead-lap cars pit for tires and fuel with Harvick once again the first car off pit road.

On the restart on Lap 178, Harvick led the way followed by Kyle Larson, Blaney, Truex and Kyle Busch. Larson quickly grabbed the lead back on the restart lap and Harvick slipped to fourth.

Matt DiBenedetto was forced to pit shortly after the restart with a tire rub and smoke began building in the driver compartment.

On Lap 194, Kyle Busch got around his teammate, Truex, to move into second, less than a second off leader Larson.

Truex took back the second position on Lap 206. Harvick moved into third on Lap 214.

Several teams headed down pit road on Lap 220 to begin a round of green-flag pit stops.

On Lap 223, Kyle Busch had a right-rear tire go down and smoke began pouring from his No. 18 Toyota, which brought out the first caution of the race for an on-track incident.

Kyle Larson was first off pit road but was penalized for speeding and had to restart from the rear of the field. That left Harvick as the race leader when the race returned to green on Lap 228. He was followed by Blaney and Truex.

Ryan Blaney tried to make a move for the lead on the restart only to see Truex push Harvick to help clear him.

On Lap 231, Blaney got around Harvick to take the lead and Truex followed him past Harvick and into third.

With 80 laps to go in the race, Blaney continued to hold a small lead over Truex followed by Joey Logano, Harvick and Keselowski.

On Lap 255, Keselowski had made his way up to third.

With 60 laps to go in the race, Blaney continued to hold a small advantage over Truex. Keselowski was running third, Logano fourth and Harvick fifth.

Several teams began making a likely final green-flag pit stop on Lap 268. During the stops, Ryan Preece slammed into B.J. McLeod, who was making a wide turn into his pit stall. Both cars suffered extensive damage.

Truex was pitting at the time but was penalized for having a pit crew member go over the wall too soon and will have to restart from the rear of the field.

Once everyone had pit, Logano was leading the race, followed by Kurt Busch and Keselowski. The race returned to green on Lap 282.

On Lap 293, Keselowski passed his teammate, Logano, on the side to take the lead for the first time.

With 25 to go, Keselowski held a small advantage over Logano with Kurt Busch running in third and Truex in fourth.

Keselowski held a more than 2-second lead over Truex with 10 laps to go in the race.

Harvick wins Stage 2 at Atlanta after battle with Larson