Harvick wins Stage 2 at Atlanta after battle with Larson 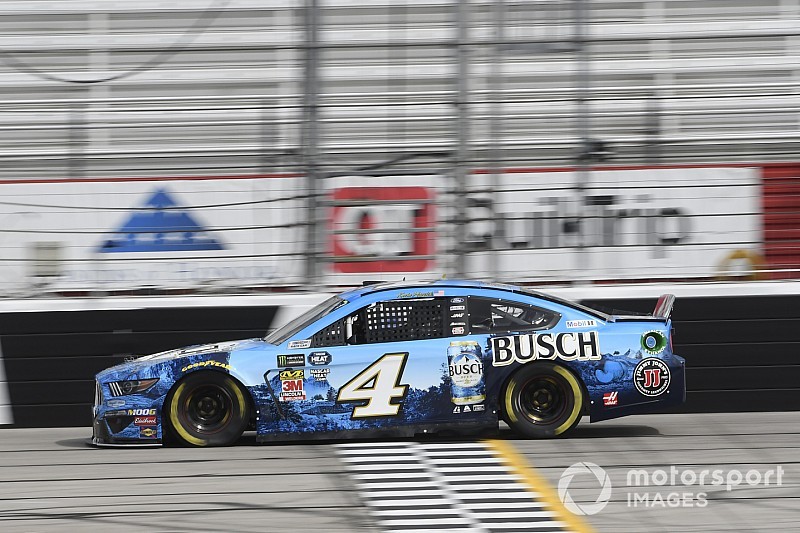 Kevin Harvick finally cleared Kyle Larson for good with nine laps to go and held on for the Stage 2 victory at Atlanta Motor Speedway.

Following the break between Stages 1 and 2, all of the lead-lap cars pit for tires and fuel with Harvick the first off pit road. He was followed by Larson, Kurt Busch, Blaney and Truex.

Aric Almirola was penalized by NASCAR for speeding on pit road and had to restart from the rear of the field.

Kurt Busch went three-wide to try to take the lead on the restart on Lap 93, only to see Harvick able to escape out front and Busch drop back to fifth.

By Lap 112, Larson had closed the gap on Harvick and was finally able to make his way around him to take the lead. Truex was running in third.

With 50 laps remaining in the stage, Larson had expanded his lead over Harvick to about 1 second. They were followed by Truex, Blaney and Keselowski.

Ryan Newman, Ricky Stenhouse Jr. and Brad Keselowski were among the first to begin a round of green-flag pit stops on Lap 125.

During the stops, Stenhouse was penalized for speeding on pit road and had to make a drive-through penalty on pit road.

By the time the cycle of stops were completed on Lap 129, Larson remained the race leader, followed by Harvick and Truex.

Kyle Busch missed the entrance to pit road on his initial stop and had to make another lap to complete his pit stop.

With 30 laps to go, Larson held about a 1.5-second lead over Harvick. They were followed by Truex, Blaney and Hamlin.

Harvick closed to with a couple car lengths of Larson with 20 laps remaining in the second stage and began trying to get back around him.

On Lap 153, Harvick completed the pass and reclaimed the lead. Less than a lap later, Larson went inside of Harvick and took back the top spot.

With 10 laps to go, Larson maintained a slight advantage over Harvick as Truex continued to run in third.

On Lap 161, Harvick got another run on Larson and again reclaimed the race lead.