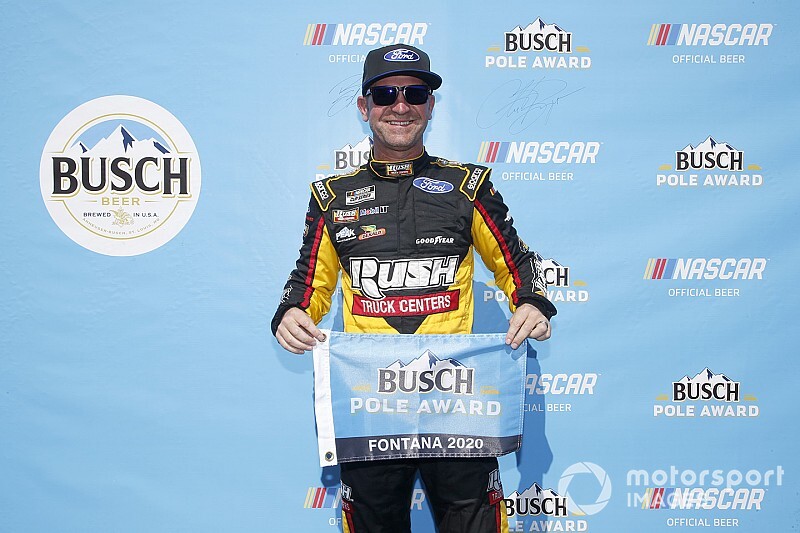 Clint Bowyer held off a pair of Hendrick Motorsports Chevrolets to win the pole for Sunday’s NASCAR Cup Series race at Auto Club Speedway in California.

Bowyer bolted to the top of the speed chart late in the qualifying session with an average lap speed of 179.614 mph and held off challenges, first from Alex Bowman – who was fastest in both practice sessions Friday – and hometown favorite Jimmie Johnson.

The pole is just the fourth in Bowyer’s career with two coming in the last two seasons.

Johnson, who leads all drivers with six wins at the track, ended up second (179.582 mph) while Bowman was third (179.359 mph). Kurt Busch and Kevin Harvick round out the top-five starters.

“I was freaking out, actually, that the sun kept coming out because the track was building temperature,” Bowyer said. “Everybody, you could see in the data, kept getting looser and looser down in (Turns) 1 and 2.

“I knew coming to the green was important, tried to stay out high, try to get up through the gear box as good as you can, but that’s what it was. It stuck down there (in Turns 1 and 2) and everybody else had to kind of chase it up the track and lost speed and momentum.

“Then (Johnson), I’m thinking, ‘Man, if it comes down and I get beat by the last car on the race track, I’m going to freak out.’ I got a pole baby! Looking forward to tomorrow. It’s going to be a hell of a race.”

The No. 19 Toyota of Martin Truex Jr. failed pre-qualifying inspection three times Saturday morning and he was not allowed to make a qualifying attempt. He will start from the rear of the field in Sunday’s race.

In addition, the No. 1 Chevrolet of Kurt Busch failed pre-qualifying inspection twice. His car chief was ejected for the weekend and the team will lose 15 minutes of practice at Phoenix next weekend.