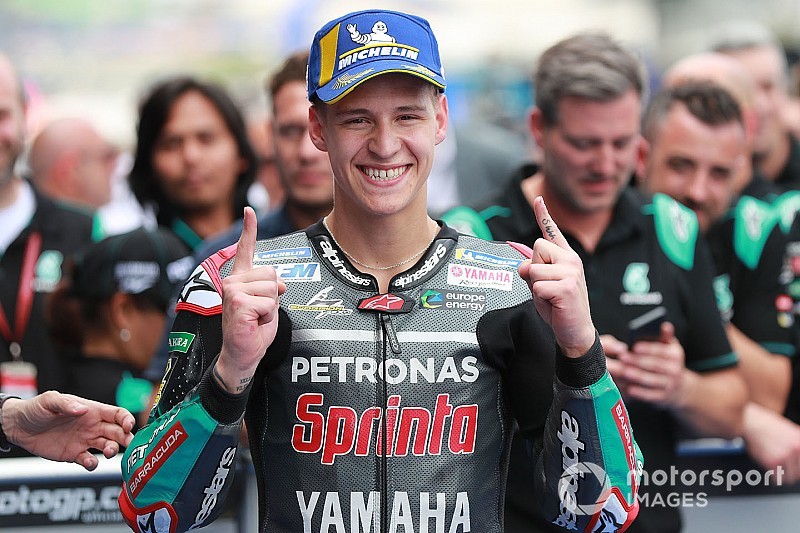 First-time MotoGP pole-sitter Fabio Quartararo said it's an "incredible" feeling to reward his Petronas SRT Yamaha team after it took a gamble in hiring him.

Quartararo entered the grand prix paddock in 2015 as the next potential star of motorcycle racing, but he couldn't convert that promise into top results, never finishing higher than 10th in Moto3 and Moto2 standings in four seasons.

But the newly-formed Petronas-backed SRT Yamaha satellite team decided to sign the 20-year-old Frenchman for its debut in MotoGP, and Quartararo has impressed since moving up to the premier class.

He was fifth already in qualifying in Qatar and went even better in the fourth round of the season as he claimed pole position at Jerez, becoming the youngest pole-sitter in MotoGP history.

"For me the team is unbelievable, it is a brand new team but I think the people inside have a lot of experience," said Quartararo, who formed an SRT 1-2 on the grid with Franco Morbidelli taking second.

"I want to thank them because last year was tough in the beginning and they believed in me for MotoGP. The feeling is incredible for them and for me."

Having set his pole position time with two minutes left on the clock and with Marc Marquez still on a fast lap, Quartararo admitted that he was not expecting to remain in first place.

"The feeling is unbelievable but when I made this laptime was like two minutes remaining and I knew that Marc went with three new [rear] tyres during qualifying, so I did not expect to make the pole position.

However, Quartararo did not commit to any goals in the race, saying: "We know that all the top 10 riders have a lot of pace.

"Will be difficult to make a choice for the tyre, depends also for the weather tomorrow. We will look after the warm-up and make a decision."

Morbidelli echoed Quartararo's sentiment by saying that the race remains a question mark, while also praising the team.

"Great day for us, we were both super fast," Morbidelli said. "Fabio was able to be fast since the beginning of the weekend while I had to chase a little bit but finally in the qualifying I managed to get closer and closer.

"I am just happy and the team deserves this kind of result because they work very well, the team is made by great people.

"We feel great inside the team, I feel there is a lot of passion and energy around us and this is the demonstration.

"Today was quite cold and was overcast so the weather was not what we will face tomorrow so this is a bit of a question mark for us."

Lorenzo feels "closer than ever" to Honda breakthrough