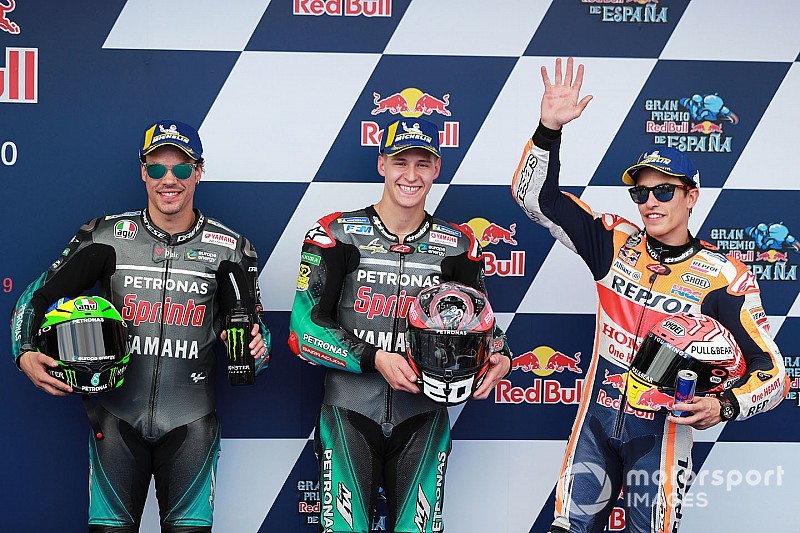 Opting for a three-run strategy in Q2, Marquez recorded just a single flying lap on his opening run, a 1m36.970s, which was enough to leave him top of the timesheets as he returned to the pits.

Only Morbidelli came close to matching him initially, lapping 0.041s slower than Marquez but almost a quarter of a second up on the rest of the chasing pack.

But after the reigning champion was unable to improve on his second attempt, Quartararo fired in a 1m36.880s, matching Marquez exactly through the first three sectors and finding 0.082s in the final sequence of corners.

With the chequered flag approaching, Morbidelli shuffled Marquez down into third place, outpacing the Honda man by 0.008s.

Ducati rider Andrea Dovizioso was up on Quartararo's provisional pole time three sectors into his best effort, but ultimately came up 0.138s short.

Maverick Vinales was the best of the works Yamahas in fifth, having advanced from Q1, and will share the second row with fourth-placed Dovizioso and sixth-placed Cal Crutchlow.

Marquez's Honda teammate Jorge Lorenzo crashed at Turn 2 late on and had to settle for 11th, while the other Suzuki of Joan Mir made up the order in Q2.

While Vinales had been relatively comfortable advancing to the pole shoot-out, his factory squadmate Valentino Rossi was consigned to 13th on the grid, despite having led Vinales by 0.007s after their first runs in Q1.

As Vinales improved by just over two tenths, Rossi's protege Bagnaia slotted in between the Yamahas shortly before time expired, and the seven-time MotoGP champion was unable to respond and avoid an early qualifying exit.

Honda wildcard Stefan Bradl was just a tenth away from advancing to Q2, securing 14th on the grid ahead of Bagnaia's Pramac teammate Jack Miller – who crashed at Turn 2 on his final lap.

Aleix Espargaro led Aprilia's efforts in 16th, while squadmate Andrea Iannone had crashed early in the pre-qualifying FP4 session and was forced out of action for the rest of the day.

Iannone paid a visit to the Clinica Mobile paddock facility for x-rays on his left ankle, although these showed he'd escaped a fracture.

Espargaro's brother Pol was again the benchmark for KTM in 17th, albeit this time only 0.022s clear of Johann Zarco.

Jerez MotoGP - qualifying as it happened