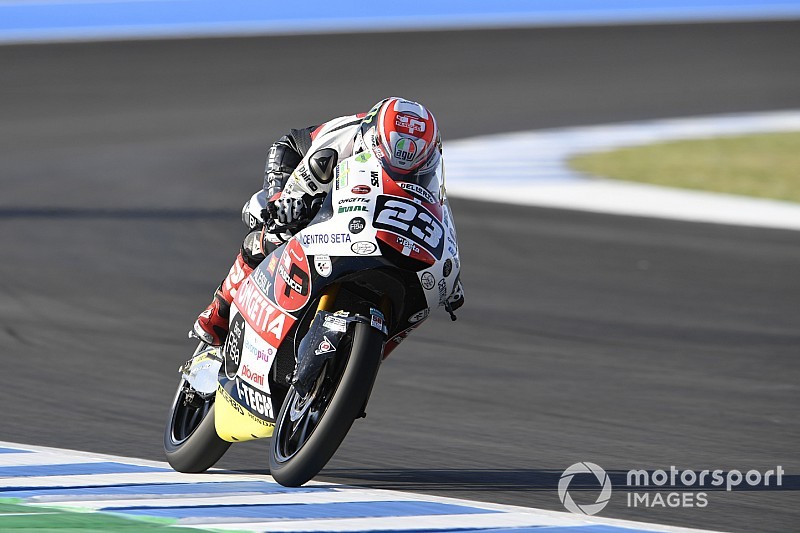 For most of the race, the lead was contested between Antonelli's teammate Tatsuki Suzuki and pole-sitter Lorenzo Dalla Porta with the duo trading positions on numerous occasions.

Their teammates Ramirez and Antonelli broke the status quo heading into the last couple of laps as both passed Suzuki.

But Ramirez ended up hitting the back of Antonelli on the exit of Turn 4, his bike dangerously sliding across the track and several riders coming close to hitting it.

In the end, everyone avoided it but Romano Fenati, the Italian caught out and forced to retire.

Antonelli stayed ahead for one more lap before Suzuki passed him, but rookie Celestino Vietti then moved to the front with a Turn 1 overtake on the penultimate lap.

Vietti was demoted by Antonelli at the final corner of the same lap and, despite running slightly wide at T6, Antonelli spent the entire last lap in the lead.

Antonelli scored his fourth Moto3 win, and his first since the 2016 Qatar opener.

Max Racing Team's Aron Canet spent the whole race in the top group and grabbed fourth to take the championship lead, one point ahead of Antonelli.

Masia, who started the race as the championship leader, crashed on Lap 2 as fellow local riders Sergio Garcia and Raul Fernandez collided at Turn 6, the former taken out by the latter.