McLaren boss Andreas Seidl does not want Lando Norris to treat the start of the race in Abu Dhabi any differently despite lining up behind the Formula 1 title rivals.

Norris qualified third for McLaren on Saturday at the Yas Marina Circuit behind Max Verstappen and Lewis Hamilton, who enter the season finale tied on points at the top of the drivers' championship.

Norris said soon after qualifying that he felt "a bit nervous" lining up behind Verstappen and Hamilton, and that he felt reluctant to get involved in their championship fight.

But McLaren team principal Seidl felt it was important for Norris to treat the start of the race "the same as you always do" and not to prepare for the opening lap with any special plan because of the championship situation.

"If you try to be too cautious, for example going into the first corners, or you try to orchestrate something, you take this intuitive feeling the drivers, or the experience they are having, and this intuitive reaction away from them, and then it starts to get dangerous," Seidl said after qualifying.

"I think that must be the process of tomorrow for Lando.

"In the end, the objective is clear for tomorrow, we want to score a good result for us as a team, and we want to get back in P5 in the drivers' championship with Lando.

"In order to do that, we need a good result, and that's how we approach it." 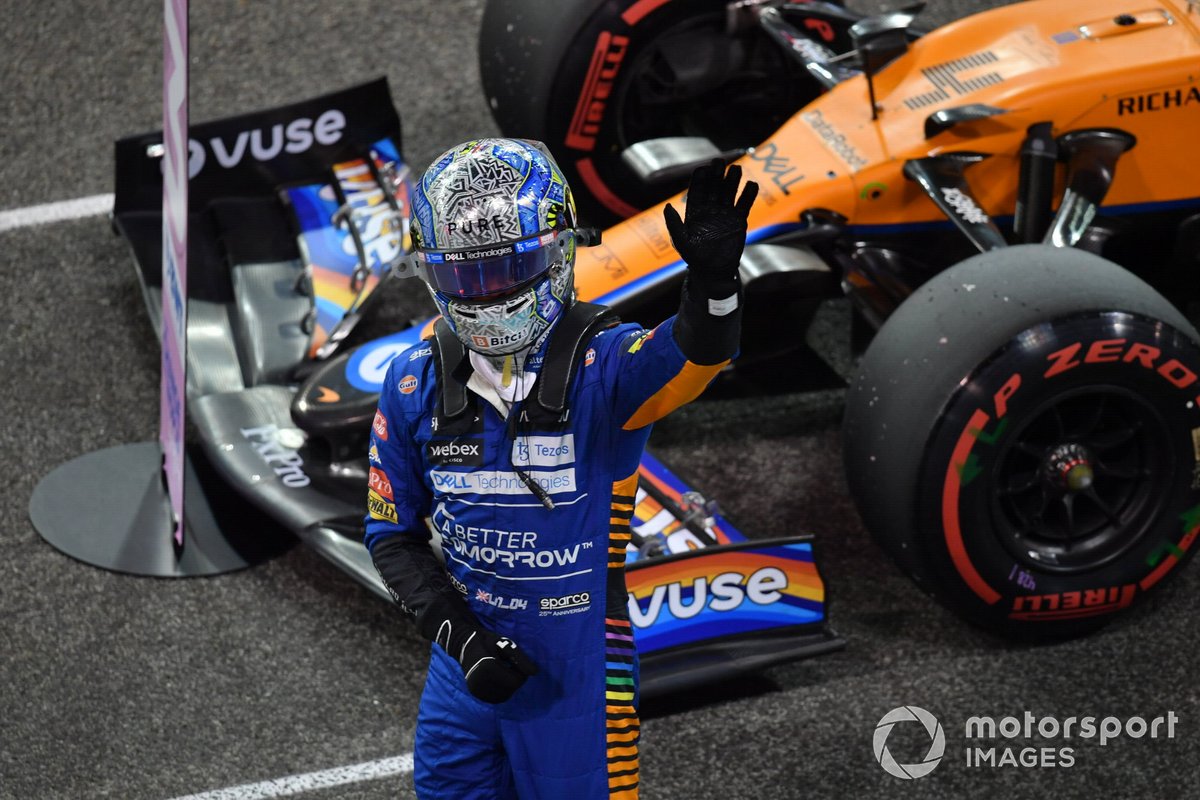 Lando Norris, McLaren, waves from the grid after securing third in Qualifying

Norris starts Sunday's race four points behind Ferrari's Charles Leclerc in the fight for fifth in the drivers' standings, and is just 4.5 points ahead of Carlos Sainz in seventh.

But he felt sure that he could try and fight up the order to push and regain the place from Leclerc without causing any issues in the title battle.

"That's part of their racing too. It's also up to them to race other people. It's been an easy championship for them, and I'm sure there have been much bigger hurdles for this season than just trying to pass me in the McLaren.

"So yeah, of course we need to pick our battles wisely. And I know I'm racing Ferrari, realistically. But in doing so, I can gain track position if I do get involved and try and get them at the start, so I'll do that.

"I just need to know I'm not racing them in the long term of the race, and they have their own battle. I guess you have to leave maybe a bit more room and have a bit more respect because they are in that battle for the championship.

"The last thing I want to do is for anything to happen. Yeah, this is tricky. It's a difficult situation to be in to be honest, we just have to wait and see."