Newly-crowned DTM champion Sheldon van der Linde has admitted he struggled to sleep ahead of this weekend’s championship finale at Hockenheim.

Van der Linde defeated Mercedes’ Lucas Auer and Audi star Rene Rast in what turned out to be a three-way showdown to clinch BMW’s first drivers’ title in the DTM since 2016.

Although the South African arrived at the former Formula 1 venue with a healthy 11-point lead over nearest rival Auer, things quickly took a turn for the worse when he was hit with a 10-place grid penalty for a tyre infringement, leaving him 16th on the grid for the opening race of the weekend.

Van der Linde put in a heroic effort to climb to second position in a crash-filled race, but victory for Auer reduced his title lead to just two points going into Sunday’s title decider.

Ultimately, the 23-year-old was able to finish third in the race behind race winner Marco Wittmann and Rast to clinch his first title in Europe by 11 points, as Auer struggled to seventh with heavy success ballast on his Mercedes.

Speaking in the post-race press conference, van der Linde was relieved to have finally achieved his childhood dream of winning a DTM title after a pressure-filled weekend at Hockenheim.

“From Thursday on I couldn't really sleep every night, I had a lot of sleepless nights since last week,” he said.

“For me the best way to describe this right now is taking 300kg and taking it off my shoulders because I had so much pressure the whole weekend.

“When you come in as a leader everyone expects you to win the championship and it sounds super easy from the outside but there are so many factors that play a part.

"I'm just super, super happy for the team, extremely proud to finally win this championship. It's been a childhood dream of mine ever since I was four or five years old.

“Coming from South Africa as a young boy it is extremely hard to really break through and really make it as a professional racing driver first of all and then be a champion.

“So for me the first step was always to reach DTM and the next goal was naturally to be champion. To finally achieve this is, I don't even know how to say, f*****g unbelievable.” 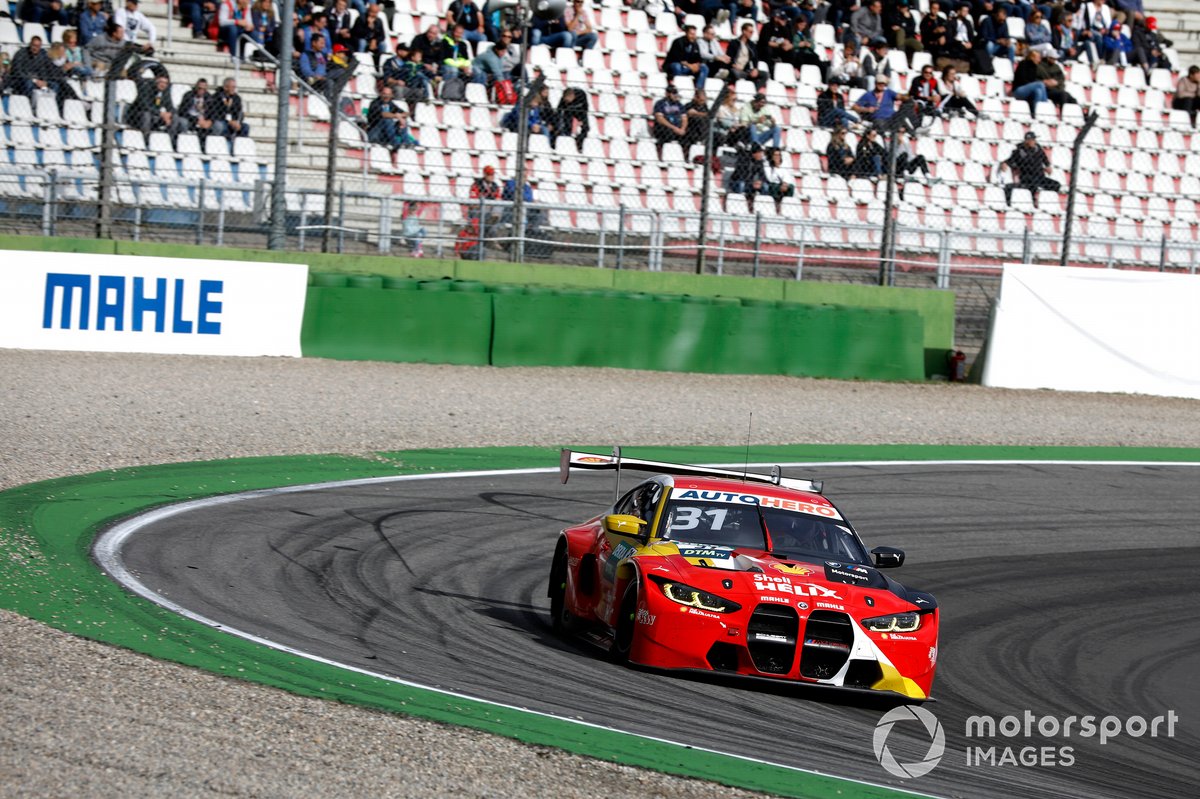 Van der Linde had qualified sixth for the opening race of the weekend, but his Schubert team was found to have broken a rule that prevents tyres from being fitted on a car between one hour and five minutes before the start of qualifying.

The South African said he was shocked to hear he was hit with a 10-place grid penalty for the offence, having felt he had put together a strong lap to qualify on the third row of the grid.

“It was obviously hard for me to keep a cool head after I experienced what happened [on Saturday],” he said.

“I only heard about the penalty after qualifying and naturally that was a really good lap that I managed to put together in qualifying. It felt like I put a good lap together with the tools that I had and then being sixth.

“And then my engineer came to the track and told me we have a 10-place grid penalty. I thought he was joking actually. I was like, 'you're not serious, right'? And he is like, 'no, no, it's really like that'.”

Although van der Linde didn’t feature in the battle for victory in Sunday’s finale after struggling in the opening stint and was only promoted to the final spot of the podium after a puncture for Grasser Lamborghini driver Clemens Schmid, he knew he had the title in the bag as long as he remained ahead of Auer on track.

“I had to tell my team to bring me early for a pitstop because I had zero performance on that tyre in the first stint, I was almost half a second or more too slow,” he said.

“When you have Lucas coming closer obviously it's not the nicest thing to see in the mirror. I kind of told my team to bring me earlier than expected so we boxed on lap 9 and from then on the car was a different car to drive, just based on the tyre.

“I saw Lucas falling back. Every time I came out of Sachs corner I saw him coming to Motodrom, so I had a nice little measurement of where he was.

“And he was falling further and further back, so even though I wasn't the fastest today, seeing that is obviously motivating to know that your title contender is falling a bit further back.“

The remarkable rise of the DTM's first family