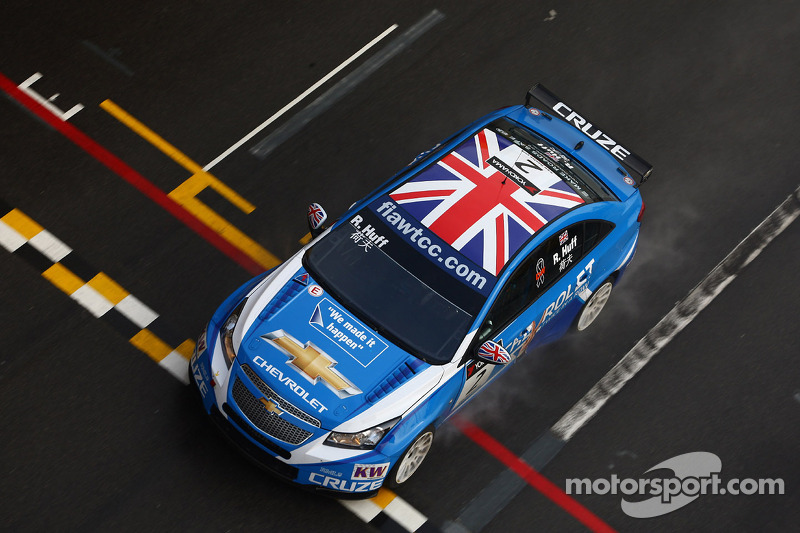 The fight for the Drivers' world championship will have an exciting showdown on Sunday at Macau after Chevrolet team-mates and title contenders Rob Huff and Yvan Muller managed to qualify on the front row for Race 1.

Huff, who is chasing Muller twenty points behind, claimed his fourth pole position of the season. The first for him after those in the three opening events at Curitiba, Zolder and Monza. This also meant that Chevrolet completed a clean sweep in qualifying, winning twelve pole positions out of twelve events, that were equally shared between their three drivers.

Thanks to his advantage, Muller was not obliged to take too many risks and the second position will give the opportunity to control his younger team-mate. For the third Chevrolet man, Alain Menu, qualifying turned to black as he failed to make it to Q2 because of an accident. This enabled Gabriele Tarquini to qualify third and local hero Darryl O'Young to achieve his best qualifying result ever. 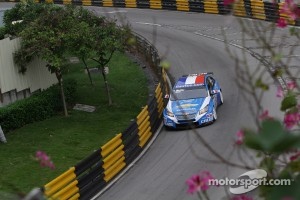 The session had a curious end, as Huff stopped along the track after posting the fastest lap. It was not because of a mechanical failure, but cramps to his left calf!

Q1 - Robert Dahlgren set the fastest time in the first part of the qualifying session, completing a lap in 2:32.881. The Swede ousted Yvan Muller who had posted a provisional fastest time of 2:33.353 in the early minutes.

As usual Q1 provided lot of drama, with the drivers fighting to win places for Q2. Some of them took extra risks, like Alain Menu who made contact with Andre Couto car before the Dona Maria Bend while trying to improve from his 13th position.

Charles Ng was another victim, crashing into the concrete wall at the Fishermen's Bend just before the chequered flag was waved. The latest minutes saw Darryl O'Young posting the second fastest lap (2:33.177), demoting Muller to third. André Couto moved up to fourth (2:33.954) and Tiago Monteiro failed to make the cut by only 0.088 seconds.

Q2 - Drivers did not even have the time to complete the first lap that they were stopped by the red flag after Robert Dahlgren crashed his Volvo C30 at Paiol. The car caught fire, but the driver managed to come out by himself with a broken thumb.

The marshals had to clean the track from the oil spilled by the Volvo engine and the session resumed after 25 minutes. Huff and Muller posted provisional fastest laps on the first attempt: 2:31.868 and 2:32.027 respectively.

In the late stages Coronel improved to 2:33.825 that gave him a provisional third place. However, the last tries reshuffled the positions. Muller retook the lead with a lap of 2:31.149, but just for the time Huff crossed the line claiming pole position with the time of 2:30.881. The final drivers to take the flags were Gabriele Tarquini (2:32.147) and O'Young (2:32.519) who qualified third and fourth respectively, with the Chinese racer on pole for the Yokohama Trophy. 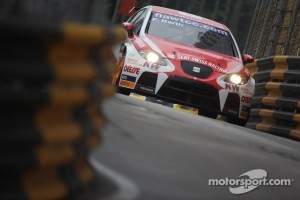 Fredy Barth and Robert Dahlgren escaped heavy crashes at the fast Paiol bend. The Swiss driver hit the concrete wall during the second practice and after the impact remained unconscious inside his car on fire. Marshals and firemen managed to extricate him and extinguish the flames. Barth was conscious and unscathed, although intoxicated for breathing the fire's smoke. He was taken to the hospital, where medical checks excluded brain and cervical damage.

Dahlgren crashed during qualifying; he managed to get out by himself of the wrecked car but suffered from a fracture to the third phalanx of his right thumb.

The doctors declared both drivers not fit for racing on Sunday.