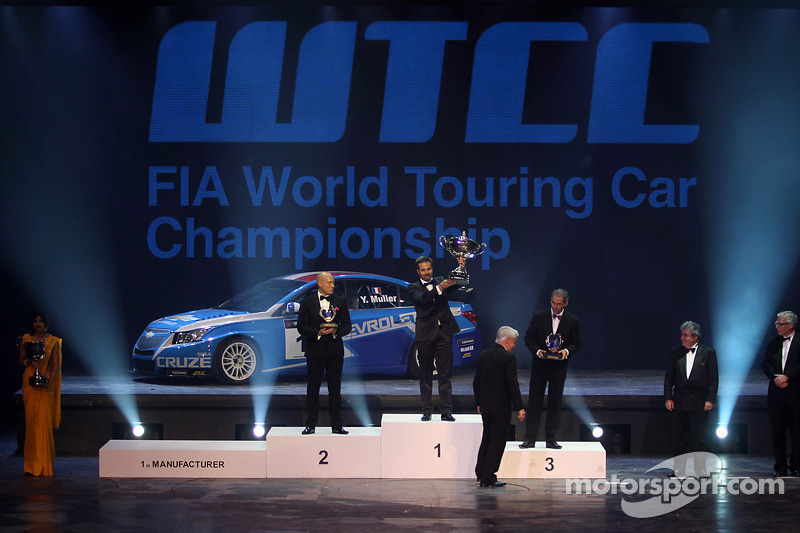 His consistency was especially highlighted by the results obtained throughout the current season: eight victories and 19 podium finishes out of 24 races. These results enabled him to beat – but only at the last race in Macau and by just three points – his own Chevrolet team-mate Rob Huff, who also claimed eight victories during the season. Alain Menu secured third position making it an all-Chevrolet podium. 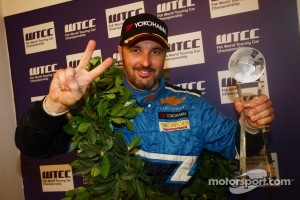 Yvan Muller said:
“The beginning of the season was not up to my expectations and standards. Then, together with my engineer, we worked a lot and eventually got our bearings. From the fourth event at Budapest I was consistently on top in qualifying and the races. I am not especially keen on thinking of records, but I admit that this was a record season in terms of results. What more should I ask for? My third title, the second in a row for Chevrolet. A great year!”

Until the final race in Macau, Muller had to fight for the title with his own team-mate Rob Huff. “It was a very close call! Rob deserved to win the title, just like me. He has been quick the whole season, and he has won as many races as I did. It was very difficult to beat him and sometimes I had a little bit of luck, like in Valencia or Shanghai. Luck is an important factor of course, but you have to be in the right place at the right moment to benefit from it.”

With three titles to his name, Muller speaks of his motivation for next season. “I have signed with Chevrolet for one more year. It will be my third season with them. I am pleased to race with them and I hope to stay there a bit more. And I will start next year with the goal to win a fourth world title. Nobody has done it before in WTCC and it would be nice to do it. After all, my fellow Alsatian countryman Sébastien Loeb has won eight WRC titles…” 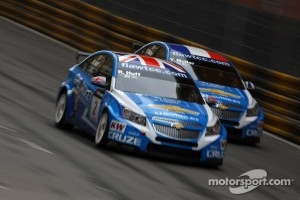 Chevrolet Motorsport Director Eric Nève, who collected the Manufacturers’ trophy, said:
“We are very happy to win the Drivers’ and Manufacturers’ Championships for the second consecutive year; so happy that we have launched an advertising campaign on this. The team worked very hard to achieve it and the key to our success was to start testing so early with the new 1.6-litre turbo engine. This gave us the edge at the beginning of the season and we were able to create a gap that proved crucial when our competitors improved in the later races. It is also very rewarding to see our three drivers filling the Championship podium. They are among the best touring car racers worldwide and we have to thank them for the great professional job they have done. It was a record season for us, testament to the hard work we have done in the last seven years since we joined WTCC. We came from one second per kilometre away from the fastest cars in 2005 to be the pace-setters today.

“I would like to say that our sporting activity is of benefit for the brand. As a matter of fact the Cruze is a truly global car and its involvement in a World Championship where the racing cars are so close to production cars is also good for the sales. We have sold one million Cruze cars worldwide, and having an event in China, where we sold 400,000, is also a great help.”

Tom Coronel to travel into space in 2014