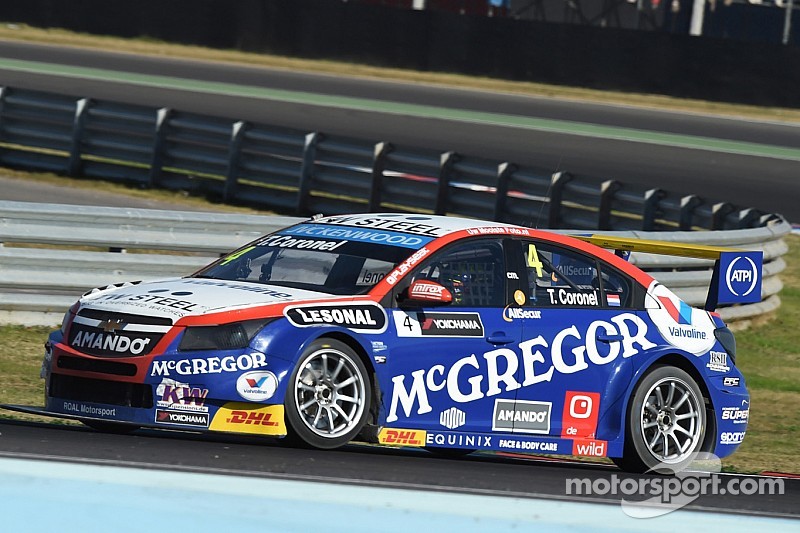 Beijing – After a two months' summer break, the FIA World Touring Car Championship returned to action at the Goldenport Park Circuit near Beijing this weekend. The Goldenport Circuit is a 2.391 kilometres long twisty and narrow race track that served as a WTCC venue for the first time this weekend as it hosted the 17th and 18th round of the 2014 season.

With this second place, I kept damage in the championship standings limited and I hope for two more results like this next weekend.

In free practice, Tom Coronel didn't quite succeed in getting the set-up of his car as he wanted. He even slid into the gravel trap once. In qualifying, he made a strong comeback with a ninth and a second place. The start of the opening race went well, but several drivers coming up from behind ran into the ROAL Motorsport driver's car.

The Chevrolet was hit from various angles and Coronel lost valuable positions, partly as a consequence of this. In the second half of the race, a piece of rubber from one of the tyre stacks caused more damage and the Dutch driver decided to head to the pits while running in 13th place in order to have his Chevrolet Cruze perfectly prepared for the second race. After all, he lined up second on the grid alongside Rob Huff.

As the lights went out, the ROAL Motorsport driver slotted into second place behind the British Lada driver while Sébastien Loeb followed Coronel in one of the works Citroëns. This battle continued in the first part of the 28 lap race. In the second part, the Dutchman pulled clear from the drivers behind him and with clear laps, he came within 0.766 seconds of race winner Rob Huff.

This was a good result for the Dutch driver and his team ROAL Motorsport that already celebrated victory in first race with Tom Chilton. In the WTCC drivers' standings, Tom Coronel is currently sixth with a total of 118 points.

After the races, Tom Coronel commented: "Some changes were made on the car, particularly on the front section. A revised front bumper was mounted to achieve more downforce on the front wheels, but at this short track, which was more like a go-kart circuit, I didn't feel much of it. At the start of the weekend, the car was good and we were somewhere between fourth and sixth place.

Thus, I was the fastest Chevy driver and I had a good feeling. In the free practice sessions, things were totally different. I was all the way down in twelfth and then even in 14th place and we couldn't get the set-up right, so things didn't look good at all. However, the situation was considerably better in qualifying, in which I ended up ninth.

At such a short track, time differences are very small. One corner follows immediately after the previous one and there are very few opportunities for overtaking. On top of that, the red flags were out once, so that I had to use another set of fresh tyres. The fact that my ROAL team-mate Tom Chilton claimed pole position for the first race was a good thing for my team. My first start went reasonably well, but I was on the outside and everyone wanted to pass on the inside.

I was hit several times and I opted to stay out of all the battles to keep my car undamaged for the second race. I only partly succeeded, because some drivers still hit me. I also hit a piece of rubber from one of the tyre stacks, which damaged the right front part of my car. At that time, I was 13th, so I wouldn't have scored any points, which made me decide to head for the pits to prevent any further damage and to have my car repaired.

That all worked out very well, although we only had limited time. My start into the second race went well, but Loeb already put me under pressure going into the first corner. He wasn't able to overtake me, but the battle allowed Rob Huff to pull clear from us. Halfway through the race, I noticed that Huff was having tyre problems while Loeb came more and more under pressure from his team-mate Lopez. Thus, I was slightly more comfortable and I managed to close up on Huff with some clean laps.

His margin was only just big enough to win the race, but the difference at the finish line was small. With this second place, I kept damage in the championship standings limited and I hope for two more results like this next weekend. That would be fantastic."