The Hyundai driver delivered a string of fast times, winning all three afternoon stages to leapfrog Toyota's Evans into a 0.7s lead at the end of Friday.

Neuville had struggled with chronic understeer in the morning pass through the stages but his pace was transformed after midday service.

Evans maintained his strong speed but was rattled by a tankslapper on Stage 5, but he incredibly recovered to crucially extend his margin over championship leader and teammate Sebastien Ogier.

Ogier, who could secure an eighth world title if he outscores Evans by six points, ended the day 19.4s adrift of lead and 18.7s behind Evans.

Feeling much more comfortable with his i20, he took the stage by 0.3s from Evans, who took another 3.3s out of title rival Ogier.

However, the big talking point was the demise of Tanak, who crashed out 3.6kms into the stage, both Tanak and co-driver Martin Jarveoja were reported to be okay after a heavy impact with a tree stump.

"We went off and hit a tree stump and made quite a bit of damage to the car," said Tanak. "It was actually quite some impact so we probably carried too much speed into the corner and locked a wheel, it was dirty also. I couldn't save it."

Rovanpera showed signs of a recovery as he clocked the fourth fastest time after struggling with understeer on the morning pass of the Vilaplana stage.

The penultimate stage of the day provided plenty of talking points as Neuville produced a near perfect drive to blitz the stage and take the overall rally lead.

The Belgian managed to beat Evans by 7.9s, the margin aided by a wild high-speed moment for the latter, who entered the stage with a 7.6s advantage.

"I was able to take more out of the car and you can immediately see it in the times," said Neuville.

Evans took a gravel cut which kicked his Yaris sideways and somehow he wrestled the car back into line, but clipped a kerb and lost time in the process. The Welshman did recover towards the end of the stage to finish with the second fastest time, 2.2s quicker than Ogier, who also had a moment at the same corner as his teammate. 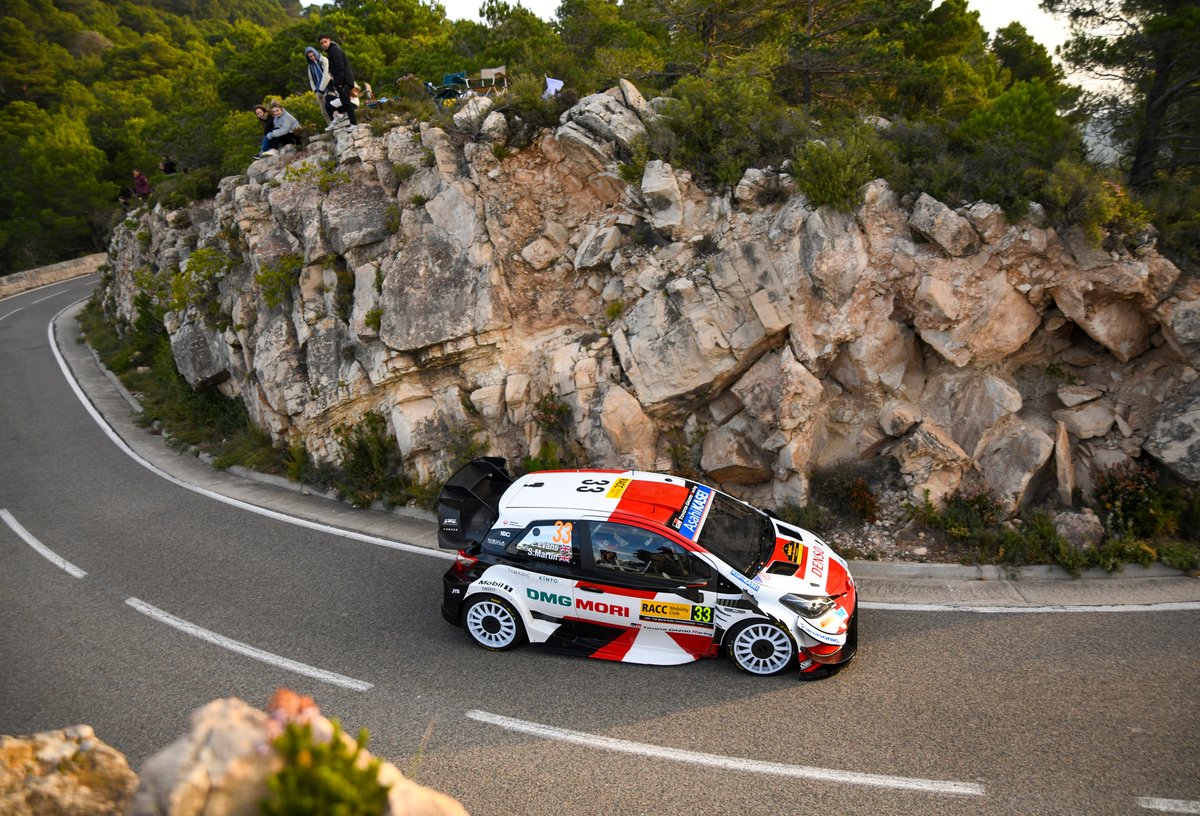 "It was a pretty big moment," said Evans. "I just got caught out by the gravel and she just took off. Naturally I was really tentative through some of the other places. We struggled a bit in the gravel."

Sordo was also lucky to set the third fastest time after damaging his left rear wheel rim after running wide on a corner.

"We went wide in one corner," said Sordo. "To understand the time of Thierry - he is really fast when it's like this. I tried to push, but this time is so difficult to make."

Neuville wrapped up the day with a hat-trick of stage wins but was only 0.4s faster than Evans.

Sordo made his local knowledge count to post the third fastest time ahead of Ogier and Fourmaux.

“It’s been an OK day for us today. It was not as good as we wanted, as we came here wanting to fight for the victory and at the moment we didn’t have the rhythm for that," said Ogier.

"Nineteen seconds is a bit too much of a gap tonight but we’ll keep working to improve and we’re still in a position to fight for big points, so let’s see what tomorrow brings.”

Rally Spain continues on Saturday with a further seven stages, beginning at 0744 BST.