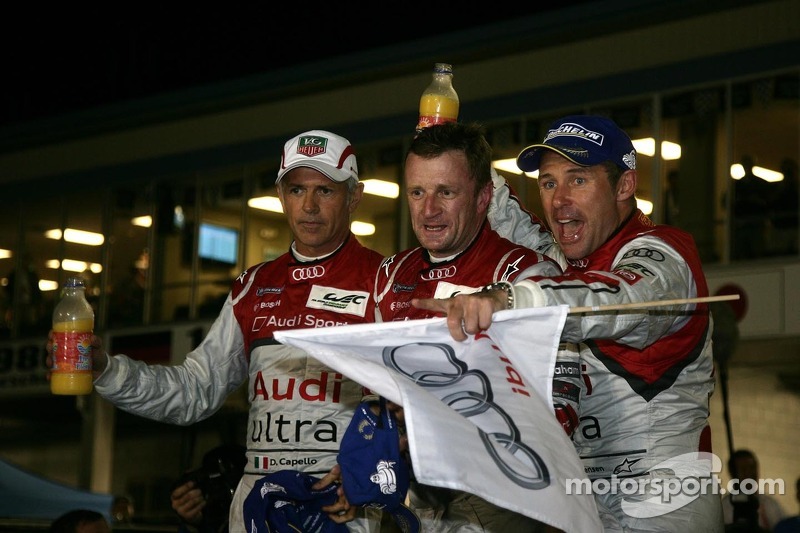 Suspense through to the end: In a race that was interrupted by a total of eleven caution periods, Capello/Kristensen/McNish in the Audi R18 TDI designated as car number "2" had to work hard for their victory. Their rivals from their own team in car number "3" consistently remained within a striking distance with gaps of a few seconds in the first ten of the race’s 12 hours. The safety car repeatedly reduced the gaps of the trio at the front but Bernhard/Dumas/Duval lost four laps shortly before the end of the race due to body contact with a competitor.

We had a tremendous battle with our team-mates.

At the same time, Audi Sport Team Joest kept its opponents at bay with perfect tactics. The squad set alternating pit stop intervals for its two best Audi R18 TDI cars which consistently kept their quickest rivals from HPD-Honda one lap behind the two diesel-powered sports cars. The race was dominated by heavy traffic and a large number of accidents in the field of 63 entrants but thanks to the precision-work of the drivers the victorious R18 TDI managed to cover the whole distance without any body damage.

Yet not only the tenth Audi victory at the 60th anniversary run of the Sebring 12 Hours is a milestone in the history books. Tom Kristensen as the record holder celebrated as much as his sixth personal success at the classic race in Florida, Dindo Capello his fifth and Allan McNish his fourth. Three years before, the trio had clinched Audi’s last victory to date.

The third Audi initially had perfect chances of finishing in a top position as well. André Lotterer, who had clinched the first pole position in qualifying for the new FIA World Endurance Championship for Audi, together with his team-mates Benoît Tréluyer and Marcel Fässler was the fiercest rival of the subsequent winners. Shortly before the race’s midpoint, car number "1" lost 17 laps though. A defective electrical shifting unit on the transmission forced the team to make an unscheduled repair in the tent. In the end, the three Le Mans winners from last year finished in 16th place overall and fifth in the LMP1 category of the WEC classification.

While the Audi R18 TDI in the presence of Jean Todt, the President of the FIA, delivered its successful farewell performance at Sebring, media and guests of Audi of America had the chance to get a glimpse of the future. On the fringes of the event Audi presented to them the new R18 e-tron quattro which like the new R18 ultra will be fielded as of the second WEC round on May 5 at Spa (Belgium). A week before, the new Audi A5 DTM will also be making its eagerly awaited debut at the Hockenheimring. 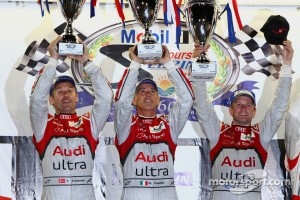 Dr. Wolfgang Ullrich (Head of Audi Motorsport): "Obviously, it’s nice that after the tenth pole position for Audi at Sebring we managed to achieve the tenth victory as well. For us, it was a great start into the season and into the new FIA World Endurance Championship. We had three cars here that were running at absolutely equal speed. They allowed us to score this one-two victory. Unfortunately, there was a small problem with the third car which prevented us from having all three cars in front in the end. Still, everyone in the squad can be proud of this result."

Ralf Jüttner (Technical Director Audi Sport Team Joest): "That was a pretty strenuous race. And our rivals were really close on our heels. They were a tiny bit slower than we but in the caution period they wouldn’t ease up on us. They only started having problems in the end. Those were eleven hours of hard work for us. Well done to Dindo (Capello), Tom (Kristensen) and Allan (McNish). It was a superb drive. Fortunately, we made believers out of all those who thought we’d forgotten how to drive cars. Congratulations, too, to the drivers of the other two cars. They were all at the same level. It’s a shame that car number "1" had the shifting problem. One repair stop at the tent and your race is over. The other car was a bit unfortunate in the caution periods in which we also had to act strategically. On the other hand, it had benefited from the yellow flags in the beginning. In the end, after slight body contact, they finished as the runners-up. And I’m proud of our mechanics too, who practiced a lot during the winter. A nice WEC opening victory! That motivates the whole squad."

Dindo Capello (Audi R18 TDI #2): "Allan (McNish), Tom (Kristensen) and I have been waiting for this victory for three years. It was the right time to be back on the top of the podium. It’s a sweet success, also because we drove the Audi R18 TDI for the first time here at Sebring. Bringing the car home without any scratches in a field of 63 vehicles is no easy feat. We learned a lot last year. Today we showed that we can get through traffic without body contact in a closed car as well."

Tom Kristensen (Audi R18 TDI #2): "Audi Sport Team Joest did a fantastic job. Our R18 TDI had a good set-up. Allan (McNish) and Dindo (Capello) did a perfect job of driving. We had a tremendous battle with our team-mates. But the HPD-Hondas and the Rebellion-Toyota cars chased us for a long time as well. We were always able to work out a small advantage but that could also have easily gone wrong with the many caution periods. The car was running well but traffic was a real challenge and the temperatures around noon, when I was sitting in the cockpit for a long time, were pretty high. It was tough clinching victory here. Everyone in the team and at home at Audi can be proud of this. It’s great that we won the anniversary race and the WEC opener here. But we’re already looking forward to the next race when we’ll have something in our hands that production development will benefit from yet again as well: a hybrid vehicle." 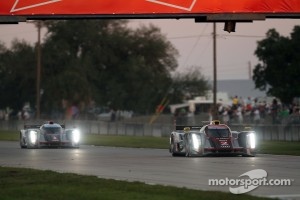 Allan McNish (Audi R18 TDI #2): "I’m very proud of the team. We worked very hard for this victory. Together with the engineers and the mechanics Tom (Kristensen), Dindo (Capello) and I invested a lot of time in working out the optimal race setup. That paid off because I think we had the best race car today. It was consistently fast and made it possible for us to be in contention from the beginning to the end. The new world championship couldn’t have started better for us than with a victory."

Timo Bernhard (Audi R18 TDI #3): "It was a great race and we finished as the runners-up after being in contention for victory for a long time. Unfortunately, there was a collision with a slower car on the straight toward the end of the race. That’s why we had stop for a short repair in the pits. Afterwards, I drove to the car to a second-place finish. These are valuable championship points. The one-two victory is fantastic for Audi - well done to the team."

Romain Dumas (Audi R18 TDI #3): "That was a nice race with good battles. We gave our best and were in contention for victory for a long time. Unfortunately, there was an incident of slight body contact toward the end. But ultimately we scored a nice second place."

Loïc Duval (Audi R18 TDI #3): "Sebring yet again showed that it’s a difficult race. As late as on the final laps we encountered a small problem but achieved the aim nonetheless: Audi won and also took second place. Finishing on the podium right on my first run for Audi was a nice experience for me - a good race!"

Marcel Fässler (Audi R18 TDI #1): "We took off from pole, had a good start and were among the front runners in terms of speed. The car was running really well and I was very pleased. About halfway through the race we had a shifting problem which cost us a few laps. At least we scored a few points in the end. Obviously, we’re a bit disappointed because we could have achieved a better result. But we were among the front runners today and that’s why I’m looking ahead with a positive mindset."

André Lotterer (Audi R18 TDI #1): "Congratulations to Audi, to Tom (Kristensen), Dindo (Capello) and Allan (McNish). They did a perfect job. It’s nice that Audi won again at Sebring. I’m a little disappointed with the result of our car. We had a technical problem and afterwards the race was unfortunately over for us. We’ve got to settle with the fastest time in qualifying and the fastest race lap. These things can happen in motorsport. But the potential was there. Next time we want to at the front of the field again."

Benoît Tréluyer (Audi R18 TDI #1): "For Audi, it’s been a great day with a one-two victory. A nice team success! We would have liked to make our contribution to it. Our lap times were good but we had a difficult day. We were on the same lap as the leading car for a long time and took no risks. Unfortunately, a problem with the shifting unit came up about halfway through the race. That cost us a lot of time. Afterwards, the race was only about finishing without any mistakes."