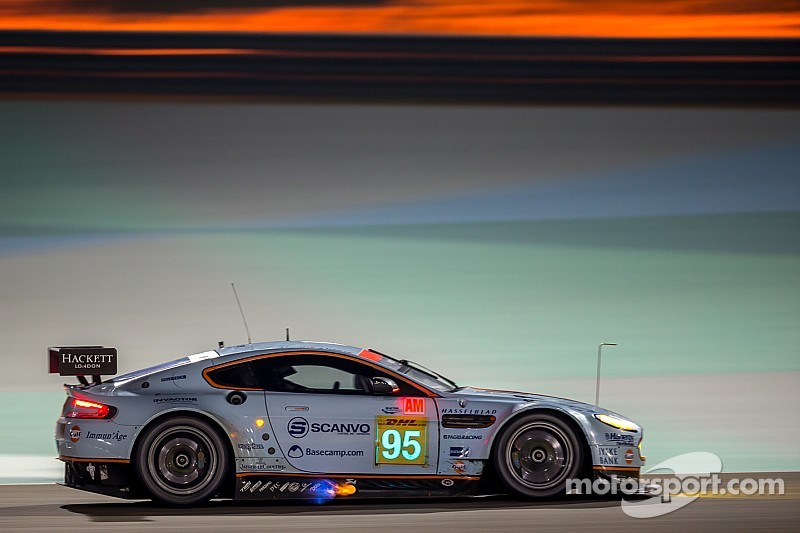 The #95 Young Driver AMR Vantage GTE has clinched the GTE Am championship-title with one round of the eight-race series still remaining and Aston Martin Racing works drivers David Heinemeier Hansson (DN) and Kristian Poulsen (DN) will take the drivers trophy in the GTE Am class.

The Danish car has had a consistently strong season, finishing on the podium in every race and taking the class win in the 24 Hours of Le Mans, the centrepiece of the WEC calendar.

We’ve been on the podium in all of the championship’s six-hour races this year, which is something to be very proud of

In the Six Hours of Bahrain earlier today (15 November) it was no different. Heinemeier Hansson and Poulsen were joined by fellow Dane Nicki Thiim and started the six-hour race from the front of the grid, a position the team held until the chequered flag.

“All we had to do was finish ahead of the #98 Aston Martin to clinch the title, but winning is a bonus,” Heinemeier Hansson commented. “The car has been so good all season and so easy to drive.

"In this race we had to watch the tyres, and we knew that from the start, but we set-up very well and it has been an smooth run to the finish.”

Poulsen added: “It means a lot to the whole team. To win Le Mans and take the championship-title in the same year is so fantastic. We couldn’t ask for more.”

It was almost victory for the #97 Vantage GTE in a battle that went to the chequered flag. Starting from the front of the grid, thanks to a great qualifying performance, Darren Turner (GB) was immediately caught up in a duel with the championship-leading #51 Ferrari that lasted for most of the race.

Together, Turner and team-mate Stefan Mücke (DE) put in lap-after-lap of heroic driving, which resulted in the #97 reeling in the class-leading Ferrari in a nail-biting final 30 minutes and they crossed the line just 1.8 seconds apart with the Aston Martin in second place.

“It was a titanic battle throughout the six hours," commented Turner. "It was a lot of fun and I really enjoyed it. We had an aggressive strategy, which is what we had to do with the additional pitstop that we knew we had to take.

“I’m so pleased for the #95 crew. They’ve had a season-long battle with #98, which has been great to watch on-track and inside the garage.”

In the GTE Am class, the #98 Vantage GTE of Christoffer Nygaard (DN), Pedro Lamy (PT) and Paul Dalla Lana (CA) crossed the line in third place, the team’s sixth podium of the season so far.

Christoffer Nygaard commented: “Firstly, I have to say congratulations to the #95 Young Driver Vantage GTE team. If we didn’t win the championship, I would always want it to be them. We’ve been on the podium in all of the championship’s six-hour races this year, which is something to be very proud of.”

The #99 Vantage GTE finished in sixth place in the GTE class with regular drivers Alex MacDowall (GB) and Fernando Rees (BR) and new driver to the team Abdulaziz Al Faisal (SA), who put in a solid performance all weekend.

“The #95 team really deserves these wins,” commented John Gaw. They have been quick and reliable all year. David and Kristian have both had a fantastic season and have been incredibly focused, professional and consistent at every round.

“In the GTE Pro class, we had a different strategy with the #97 than our competitors to optimise the tyres and fuel-load. We had to take an extra pit stop, so to finish just 1.8 seconds off the class-winner is impressive. Another lap and we could have been challenging for the win but instead they’ll have to take their battle to the final round in Brazil.”

The final race of the 2014 World Endurance Championship takes place on 30 November at the Interlagos Circuit in Sao Paulo, Brazil.