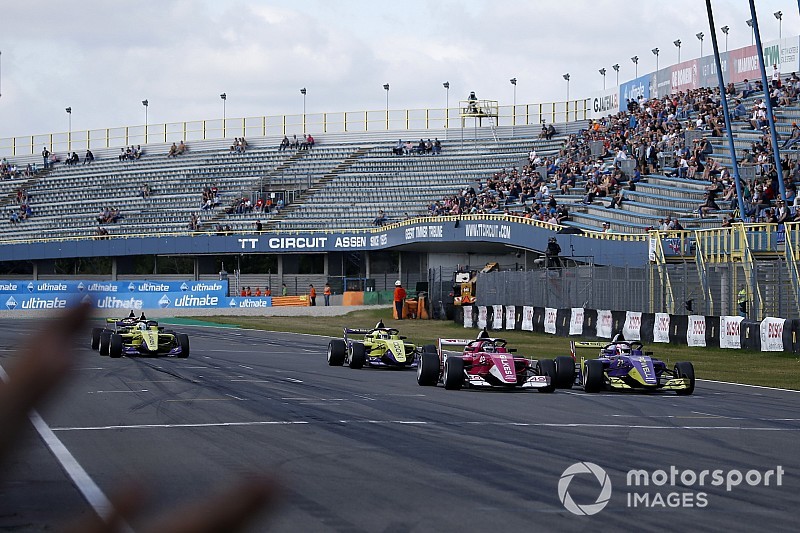 Megan Gilkes narrowly took her maiden W Series victory over Alice Powell in a photo-finish to the non-championship race at Assen, leading the whole race from reverse-grid pole.

The one-off experimental race was run with a reverse grid based on the championship standings, with Gilkes starting from pole ahead of reserve driver Sarah Bovy.

Canadian driver Gilkes led the race from the start, but by the final lap of the 30-minute sprint race was under pressure in an eight-car battle for the lead.

The 17-year-old crossed the finish line side-by-side with Saturday podium finisher Powell, who had started the race from 17th place but had climbed to sixth by the end of the first two laps.

Next in the eight-car battle and completing the podium positions was Sabre Cook.

Cook had managed to just fend off the attack of the Saturday race winner Emma Kimilainen, who had cut through the field from 15th on the grid to finish fourth.

Jessica Hawkins was fifth, having also challenged Gilkes for the lead for a time only to lose out at a restart after a safety car period, caused when Gosia Rdest spun into the gravel along with Fabienne Wohlwend.

Rdest had been pitched into the gravel by contact with Bovy, who had maintained her second place for much of the race, but began to slip back through the order after an attempted battle with Gilkes for the lead meant she ran wide off-track.

Tasmin Pepper was sixth, ahead of Naomi Schiff and points leader Jamie Chadwick who was the last in that lead battle despite having started from the very rear of the field. Vicky Piria and Sarah Moore completed the top 10.

Chadwick’s only remaining championship rival Beitske Visser had been the higher placed driver of the pair for the early stages of the race, having climbed to 14th from 19th on the first lap alone - but ultimately did not make it any further forward.

Shea Holbrook was the only other retirement besides Rdest, also spinning into the gravel and causing the first of the safety car periods around the midway point of the race.