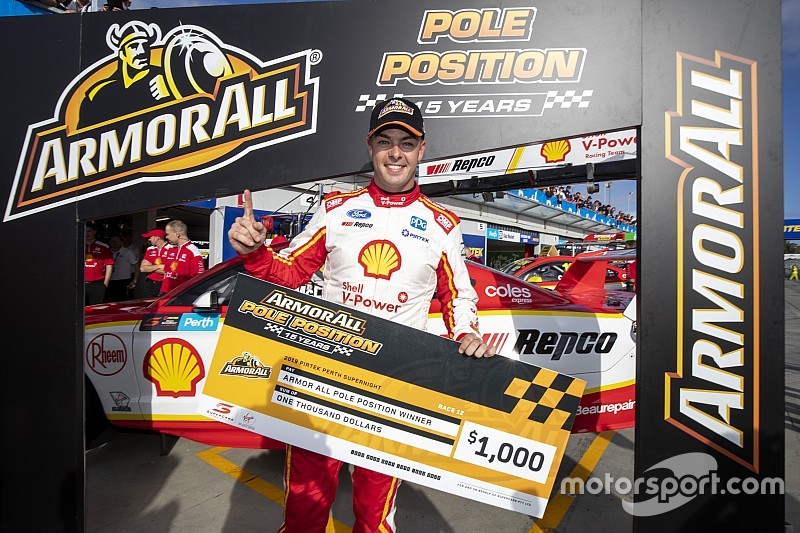 Scott McLaughlin took his second pole of the Perth SuperNight weekend with a stunning qualifying effort that left him four-tenths clear of the field.

The Penske Mustang driver pulled the same trick as he did in Friday's qualifying session, setting an impossible target for the rest of the field on his first Q3 run.

This time it was a 52.905s, which left him half a second clear of his teammate Fabian Coulthard.

McLaughlin didn't bother with a final run, and it didn't matter. Jamie Whincup managed to bring the gap down to 0.4s, but that was as close as it got.

To give the some context, the Top 22 across all three sessions was separated by less than a second, four-tenths of that between McLaughlin and the rest of the field.

“It’s all about best execution, I pride myself on that," he said.

"Whenever you don’t do a good job you get angry but that was a pretty good one and I feel proud to do it for the team.

“Within the last couple of weeks there’s been a lot bits and pieces going around everywhere and it’s really cool to be able to rally together and come out with some good results.

“But it’s half-job done, we need to try and get off the line and win this race, because I wheeled her backwards yesterday.”

Whincup played the opposite game to McLaughlin in Q3, waiting until the death to make his move. The Red Bull Holden driver ended up best of the rest, pipping Chaz Mostert, who made a narrow gain on his final run.

The Tickford driver was a surprise addition to the Q1 field, having initially taken a Top 10 spot in practice, but then been stripped of his best time for impeding Andre Heimgartner.

That meant he needed to come through Q1, before finishing seventh in Q2 and grabbing fourth in Q3.

“I was a bit pissed off about getting excluded, but apparently I impeded another lap, which is no different to what happens the rest of the year,” he said.

“You try and leave markers and gaps to other cars, but apparently I was a bit greedy.”

Friday night race winner Fabian Coulthard could only manage fifth, while Heimgartner – who avoided Q1 thanks to the Waters penalty – took sixth on the grid.

Shane van Gisbergen referred to himself as "Johnny No Pace" after finishing seventh, with Will Davison, Nick Percat and Scott Pye rounding out the Top 10.

Tim Slade missed out on a Q3 spot by just 0.004s, while David Reynolds was the biggest name to not make it into the final stage of qualifying, ending up 12th on the grid.

Lee Holdsworth was the biggest surprise of the session; despite most of the Mustangs ending near the front, the Tickford driver not only couldn't get out of Q1, but will start way down in 22nd.