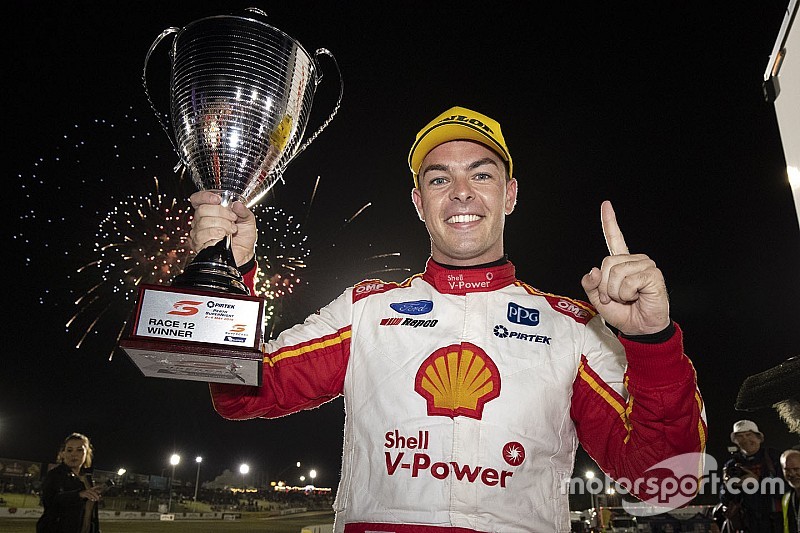 Despite falling behind Whincup for the first stint, an undercut around the first stops set up a 1.9s win for the reigning series champion.

Whincup was forced to settle for second, as Cam Waters held off Fabian Coulthard to take the final spot on the podium.

For the second night in a row McLaughlin made a sluggish getaway from pole, which allowed Whincup to sweep into the lead at Turn 1.

The pair then staged a 17-lap battle for the lead, Whincup narrowly holding on out front before McLaughlin dived in for his first stop.

On Lap 25 the leader made his first stop, Whincup's Red Bull Holden taking on more fuel than McLaughlin. That meant re-joining behind the #17 Penske Ford, but crucially just ahead of McLaughlin's teammate Coulthard.

As the first stops shook out McLaughlin's lead hung around the 6s mark, with Coulthard running third.

The #12 Penske drive kicked off the second round of stops on Lap 47, just moments before a clash with Andre Heimgartner left Scott Pye stranded at Turn 7.

That led to the Safety Car being called on Lap 50, McLaughlin and Whincup both diving into the lane. They returned to the track in the same order behind the Safety Car, while Coulthard pitting right before the caution meant he dropped to fourth behind Cam Waters.

The Lap 55 restart was a wild one for Rick Kelly, who was fired towards the pitwall on the main straight while scrapping over fifth with Shane van Gisbergen.

He managed to keep his Nissan off the wall, but did end up with a large piece of foam signage stuck in his air intake. Incredibly, it was then dislodged by another clash, this time with James Courtney.

Still, Kelly was forced to make an unnecessary stop to clear his brake ducts and dropped to the back end of the field.

At the front McLaughlin quickly built a 1.2s lap over Whincup, who had mirrors full of Waters and Coulthard.

That was all the break that McLaughlin needed, the gap ballooning out to around 2.5s before slimming back to 1.9s as he controlled the closing laps.

“I made another balls-up there [off the start], so I’ve got to look at it.

“I think the start was good, the light was just so much faster today, so I’ve got to work on myself.”

The battle for second took slightly longer to resolve itself, although Whincup did manage to pull away from Waters and Coulthard as the final stint wore on.

The two Mustangs scrapped over third for even longer, Waters ultimately getting home ahead of the Penske Ford.

Will Davison finished eighth, while Lee Holdsworth was a fine ninth after starting all the way down in 20th.

The only Mustang to miss the Top 10 was Chaz Mostert. Having run third in the early stages, sitting around 1.5s behind the leaders the Tickford driver started to slip back at around the 20-lap mark.

The culprit was an engine problem, which first caused a lengthy stint in the garage before Tickford retired the car from the race.

McLaughlin's win means he leads Coulthard by 142 points in the standings, while van Gisbergen is over a round behind in third.