Kyle Busch tops Truex at Phoenix for NASCAR win No. 199 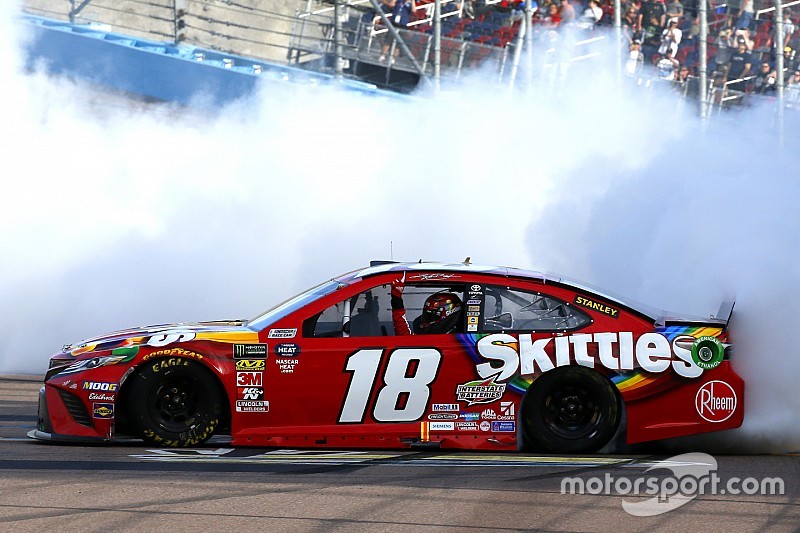 With his victory in Sunday’s Monster Energy NASCAR Cup Series race at Phoenix, Kyle Busch is one away from 200 career wins.

After battling Ryan Blaney side-by-side, Busch finally cleared him with 15 of 312 laps remaining and held off Martin Truex Jr. to win the Ticket Guardian 500 at ISM Raceway.

The victory is Busch’s first of the 2019 season, 52nd of his career and third at Phoenix. He has now won 199 races across NASCAR’s three national series – Cup, Xfinity and Trucks.

Busch is competing in both the Xfinity and Cup races next weekend at Auto Club Speedway in Fontana, Calif., where he can reach or even surpass win No. 200.

"I knew before we went back green (on the last run), that we were going to be right on the verge (of running out of fuel)," Busch said. "You got to go race hard first and then you have to worry about fuel afterwards.

"Once I got to Blaney, I was able to save a little bit. Then I tried to take care of my tires for the rest of the traffic that we had to get through and make sure we had enough fuel to make it to the end. This makes last weekend so much stupider. I wish we could have swept last week, too."

Busch won the Xfinity and Truck series races last weekend at his hometown of Las Vegas but ended up sixth in the Cup race, after having to recover from a pit road speeding penalty.

About reaching win No. 200 in NASCAR, Busch said: "It's not for me to worry about. It's for everyone else to discuss and talk about and argue over and debate. For myself and the career that I've had, I've been fortunate to be around a lot of top people and a lot of great sponsors.

"To work with my guys and take them to Victory Lane is what it's all about."

During the break between Stages 2 and 3, all of the lead-lap cars elected to pit with Kyle Busch the first off pit road. He was followed by Clint Bowyer, Truex, Ryan Newman and Harvick. The race returned to green on Lap 158.

On Lap 160, Michael McDowell got loose off Turn 2, fell off the pace and his teammate, David Ragan, ran into the back of him, which brought out a caution.

No one elected to pit and Kyle Busch continued to lead over Bowyer when the race returned to green on Lap 166. Truex was third and Johnson fourth.

With 130 laps left in the race, Kyle Busch’s lead over Bowyer was less than a second. Truex and Johnson remained in third and fourth, respectively.

On Lap 193, Alex Bowman hit the wall for the second time in the race, which brought out a caution. He ended up taking his No. 88 Chevrolet to the garage.

All of the lead-lap car elected to pit and Johnson took only two new tires and was the first off pit road. He was followed by Kyle Busch and Truex. The race returned to green on Lap 201.

During the stops, Austin Dillon was penalized for speeding, Newman was brought in for a “safety violation” and Blaney was forced to make a second stop for a loose lug nut.

After a lap, Kyle Busch was able to make his way around Johnson to retake the lead as Bowyer moved into third.

On Lap 218, Chase Elliott spun entering Turn 3 but was able to keep his No. 9 Chevrolet off the wall. Elliott had reported a possible vibration over a couple laps prior to the incident.

All of the lead-lap laps elected to pit, with Austin Dillon the first driver off pit road following a fuel-only pit stop. Harvick came out second, followed by Almirola and Blaney. Daniel Hemric did not stop and inherited the race lead on the restart on Lap 226.

Shortly after the restart, Ryan Preece got loose and was tagged by Daniel Suarez, which sent him into the wall. While avoiding the incident, Brad Keselowski spun as well and hit the inside wall.

The race returned to green on Lap 233 with Almirola in the lead followed by Hemric and Kurt Busch.

Right after the restart, Preece hit the wall again, bringing out yet another caution. Several teams elected to pit including Harvick, Bowyer, Hemric and Paul Menard.

The race returned to green with Almirola in the lead and 74 laps to go.

On Lap 240, Blaney made his way up to the runner-up position behind Almirola as Austin Dillon dropped to third.

Blaney made his way around Almirola and into the lead on Lap 252 as Kyle Busch closed quickly from the third position. Busch took over the second position with 55 laps remaining.

With 30 laps to go, Blaney maintained a small advantage over Kyle Busch. He was followed by Almirola, Truex and Austin Dillon.

Blaney held about a half-second lead over Kyle Busch with 20 laps remaining in the race as Truex made his way into third. They were followed by Almirola and Austin Dillon.

On Lap 297, Kyle Busch finally got around to the inside of Blaney in Turn 3 and came away with the lead.

Busch is the only driver to finish in the top 10 in each of the first four races of the season.