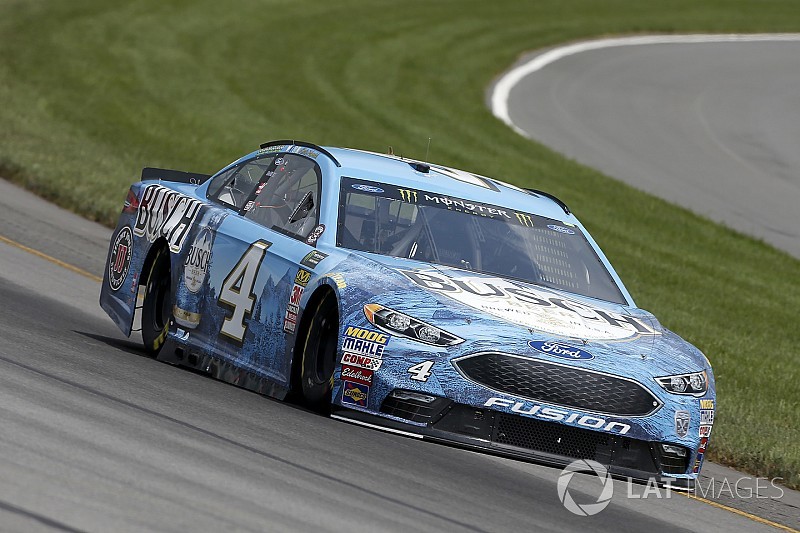 Kevin Harvick cruised to the Stage 2 victory by nearly 2.8 seconds over Kyle Busch at Pocono Raceway.

Once Harvick completed his green-flag pit stop, he quickly pulled away from the rest of the field.

Following the break between Stages 1 and 2, Keselowski took just two new tires and was first off pit road, followed by Harvick and Blaney, as Stage 2 went green on Lap 56.

Truex, the winner of Stage 1, had a slow stop and came off pit road in 14th. The left side tire bumped the jack and prematurely let the jack down.

“Had a little trouble in the pits there but we’ll do what we always do and fight back,” Truex said during the stage break.

Joey Logano had to start the second stage from the tail end of longest line after pitting for fuel just before the conclusion of Stage 1.

On the restart, Harvick moved quickly past Keselowski in Turn 1 and into the lead.

On Lap 61, Kyle Busch moved into the runner-up position as Keselowski dropped to third.

Keselowski headed down pit road on Lap 66 to short-pit, stopping for fuel and tires that would allow him to complete Stage 2 without stopping again.

With 30 laps left in the stage, Harvick maintained a more than three-second lead over Kyle Busch. Truex had made his way back up to seventh.

A number of teams began short-pitting again with 25 laps left in the stage, beginning with Ryan Newman, Blaney and Kyle Busch.

When the cycle of stops were completed, Harvick resumed the lead on Lap 83. He was followed by Kyle Busch and Keselowski. Truex had made his way up to sixth.

Darrell Wallace Jr. was one of the last drivers to make their green-flag stops but was hit with a speeding penalty on pit road and was forced to made a pass-thru penalty.

With 10 laps remaining in the stage, Bowyer moved into the third position – the highest he had run in the race to that point.