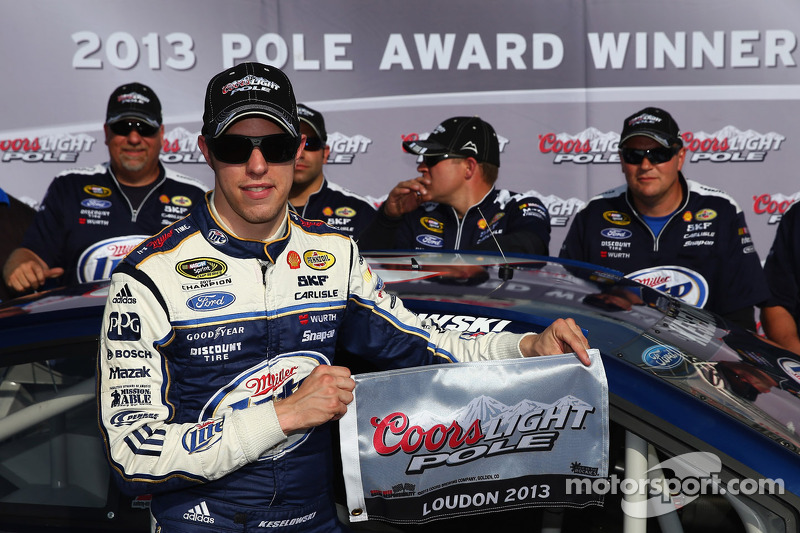 It was the defending champion’s day in Loudon for the NASCAR Sprint Cup Series qualifications on the New Hampshire Motor Speedway. Keselowski now owns the track record.

Brad Keselowski led a parade of record setters in NASCAR Sprint Cup Series qualifications on Friday afternoon at the New Hampshire Motor Speedway. Driving the Miller Lite Ford, the reigning Sprint Cup champion lowered the single-lap standard to 135.922 miles per hour as he zipped around the mile track in just 28.022 seconds.

Said Keselowski about his third Sprint Cup pole, “We’ve had good speed since we got here, but there’s a lot more to racing a track than how fast you are in qualifying. It is a good start, and we have a great race car. I think our race team is ready to hit its stride for the season. We’ve had the speed to get the job done, but different scenarios have bit us. These things will come and go, and I feel like they have gone, and this is our time.”

Keselowski said his team is focused on making the Chase field.

Qualifying second was five-time champion Jimmie Johnson, who had issues in the pre-qualification technical inspection process. Coming out late, Johnson’s frustration didn’t show as he buzzed around the facility at a speed of 135.902 mph.

The Lowe’s Chevrolet had an issue with a side skirt and was a pound off in its weight.

“I was happy to be able to make it,” Johnson said. “It was getting a little tight on the watch. We had a side skirt that was 1/16th of inch too long and a pound of weight off. These are fine adjustments and the way that things are regulated now, you either pass or fail. We cut it close on time.

“I tried to get my heart rate down, and I fired it up and had a nice lap. The car drove really good, and we just missed by a few thousands of a second. It was very close and a solid performance.”

Unfortunately Johnson's Chevy failed post-qualifying technical inspection regarding the side skirt height, and his times were disallowed. Johnson will start the race at the back of the field.

Kurt Busch qualified third fastest at 135.585 mph and will now start on the front row. Fan-favorite Dale Earnhardt Jr. stopped the clocks at 135.786 mph to earn the fourth best lap time, and will start third.

Commented the eldest Busch, “For us, it was pretty exciting. (In qualifying) I drove down into turn one and hit the rev chip so soon I thought the guys missed the setting on the chip. It could mean you are going too fast or the chip is set improperly. Luckily, it was set properly and we were just fast, but it through my timing off. I couldn’t figure out corner entry and it changed my approach.”

Kyle Busch and Jeff Gordon were next in line with Carl Edwards and Denny Hamlin trailing them.

Rounding out the top-10 qualifiers prior to Johnson's times being wiped out were Kasey Kahne and Jeff Burton.

The 10 drivers on the track with their fastest lap during qualifying all broke the old record.

71-year old Morgan Shepherd will become the oldest driver to race in a Sprint Cup event and he will start last in Brad Keselowski’s Toyota on Sunday. His last Sprint Cup race took place seven years ago.

Kevin Harvick will race No. 4 Budweiser Chevy at Stewart-Haas