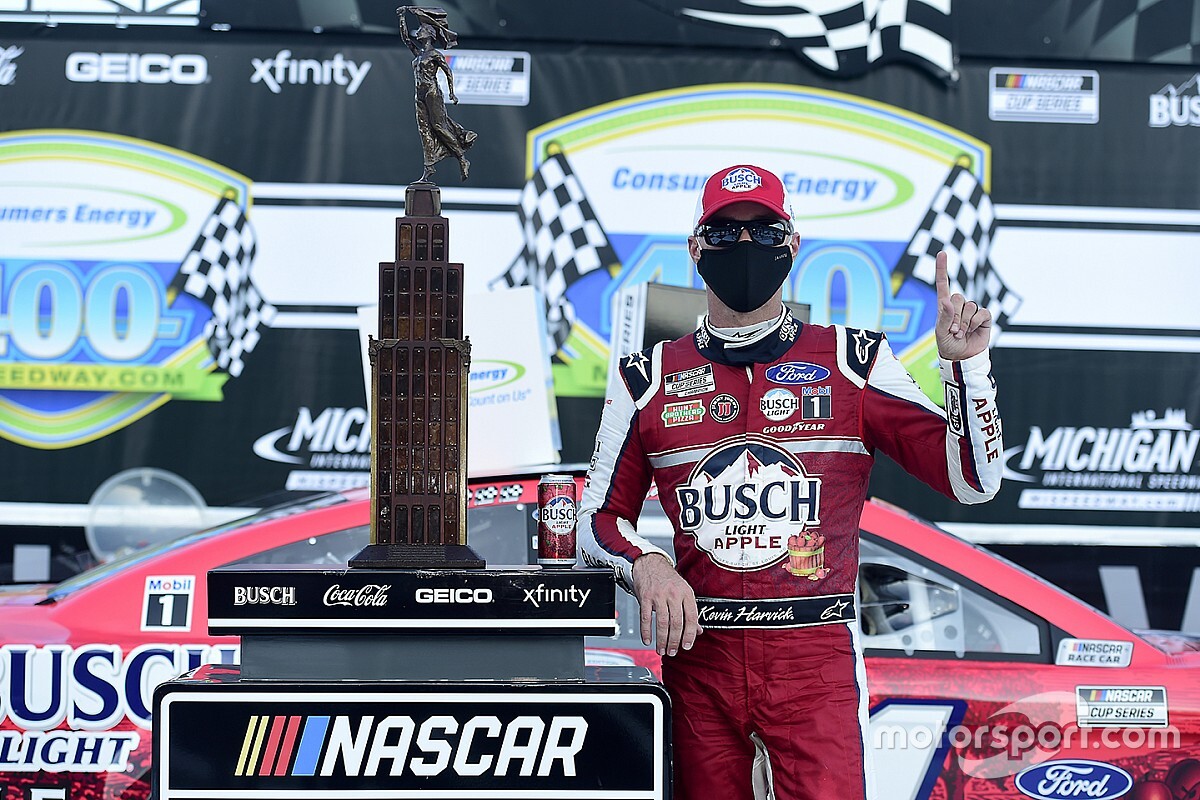 Kevin Harvick completed a sweep of the Michigan doubleheader and set himself up as a dominant player in the NASCAR Cup Series playoffs.

In what has become commonplace this season, Harvick had to out-duel Denny Hamlin down the stretch but managed to hold him off to win Sunday’s race at Michigan International Speedway.

The victory is Harvick’s sixth win in the NASCAR Cup Series this season, the most of any driver. It was also Harvick’s third consecutive win at Michigan and fourth in the last five races and handed Ford Motor Co. the track’s Heritage Trophy.

Harvick is now tied with Hall of Fame driver Rusty Wallace with 55 career wins. He also becomes the first driver to win back-to-back races on back-to-back days since Richard Petty did so in 1971.

“It was a big challenge. Our (car) got really tight there in (Turns) 3 and 4," Harvick said. "I could run really good through (Turns) 1 and 2 still, but I was just tight on that other end all day. So I’ve just got to thank all my guys. They did a great job all weekend on pit road. Great pit calls.  Just got to thank everybody who helps put this No. 4 car on the track and everybody at Stewart-Haas Racing and Roush Yates Engines for awesome power underneath the hood this weekend.

"It’s been a long time since I’ve raced back-to-back days let alone in the Cup car. I’ve never accomplished that obviously, but we’ve done that a couple times this year, so I think for us it’s worked out pretty well. We’re hoping it goes the same way at Dover when we go there in a couple of weeks.”

Asked what it feels like to drive for such a dominant team, Harvick said: "It drives you. I think when you look at my team we’ve been together for going on seven years now and you look at the confidence everybody has in each other. The details of the race cars and the thought of everything that goes into everything that we do is untouchable. That’s what it takes are details to make these race cars go fast."

Harvick holds a commanding lead in wins, playoff points and regular-season points with four races remaining before the start of the 16-driver playoffs.

Following the break between Stages 2 and 3, the lead-lap cars all pit with Harvick the first off pit road. On the restart on Lap 92, Harvick was followed by Hamlin, Ryan Blaney and Kyle Busch.

Blaney got around Hamlin and Harvick to grab the lead on the restart as Harvick settled into second. A lap later, Hamlin got around Harvick and moved into the second spot and Keselowski followed into third.

On Lap 96 of 156, Brad Keselowski went to the inside of Blaney racing for the lead but made contact and both slammed into the wall to bring out a caution. Hamlin inherited the lead during the incident.

Most cars remained on the track and on the restart on Lap 101, it was Hamlin followed by Kyle Busch, Kurt Busch and Harvick.

On the restart, Harvick wasted little time getting around Hamlin and retaking the lead.

On Lap 104, Christopher Bell spun in Turns 1 and 2 to place the race back under caution. Most lead-lap cars pit but Almirola remained on the track and inherited the lead. Hamlin was the first off pit road.

Almirola led the way on the restart on Lap 110 and was followed by Harvick.

The two spent most of the lap after the restart battling side-by-side until Almirola cleared for the lead on Lap 111.

Harvick got around Almirola on Lap 116 to reclaim the lead as Truex moved into third.

With 35 laps remaining in the race, Harvick maintained a small but steady lead over Almirola with Truex still in third. Hamlin had moved up to the fourth position.

On Lap 133, Almirola appeared to be trying to make a pass on Harvick for the lead but instead got caught by Truex, who claimed the second position.

NASCAR displayed a caution on Lap 137 for debris on the track, which likely came after Alex Bowman appeared to lose a tire carcass on the track before entering pit road.

A handful of cars elected to pit but Harvick remained on the track and in the lead on the restart on Lap 142 with Hamlin lined up on the inside.

Harvick easily cleared to the lead on the restart as Truex moved into second. With 13 laps remaining, Hamlin got around his teammate and claimed the second spot.

With five laps remaining, Hamlin was stalking Harvick to challenge for the lead as Almirola had moved back into third.

Once Harvick got the lead on the start, he led every green-flag lap on his way to a dominant Stage 2 win.

Following the break between Stages 1 and 2, all lead-lap cars elected to pit with Kyle Busch the first off pit road.

On the restart on Lap 48, Busch was followed by William Byron, Jimmie Johnson, Harvick and Logano.

Harvick gave Kyle Busch a shove on the restart and then went around him to take the lead for the first time in the race.

With 30 laps to go in the second stage, Harvick continued to lead and built a 1.3-second lead over Keselowski, who moved into second. Kyle Busch ran third.

After 65 laps, Kyle Busch was very comfortable with his No. 18 Toyota in third. “Car’s really good here. Let’s see where it goes,” he said over his team radio. “May be just a tick tight.”

With 10 laps remaining in the stage, Harvick built a 2.7-second lead over Keselowski with Kyle Busch still in third and Bell having moved to up to fourth.

Hamlin moved up to sixth with four laps to go in the stage and Almirola, who started from the rear of the field, had made his way to eighth.

Bowyer led all 40 laps on his way to a dominant Stage 1 victory over Bell, who finished more than 2 seconds behind.

Kyle Busch was third, DiBenedetto fourth and Jones rounded out the top-five.

Bowyer, who started on the pole when Chris Buescher had to start from the rear in a backup, built up a nearly 2-second lead over Johnson after the first 10 laps.

Saturday’s race winner, Harvick, who had to start 20th Sunday due to the inversion, had made his way to 11th.

After 15 laps, Bell had moved up to second while Harvick entered the top-10.

With 10 laps remaining in the first stage, Bowyer remained out front with a more than 2.7-second lead over Bell as DiBenedetto remained in third.

Kyle Busch moved to fourth with five laps to go in the stage as Bowyer continued to hold a tight grip on the tight spot.

More than a dozen cars had to start the race from the rear of the field because their teams had to move to backup cars for today’s race, including Austin Dillon, Buescher, Ryan Newman, Tyler Reddick, Ricky Stenhouse Jr., Cole Custer and Almirola.

Dillon also had to make a pass-through penalty down pit road after taking the green flag for an unapproved adjustment made to his car on pit road.