Marquez: This title even better than 2014 crown 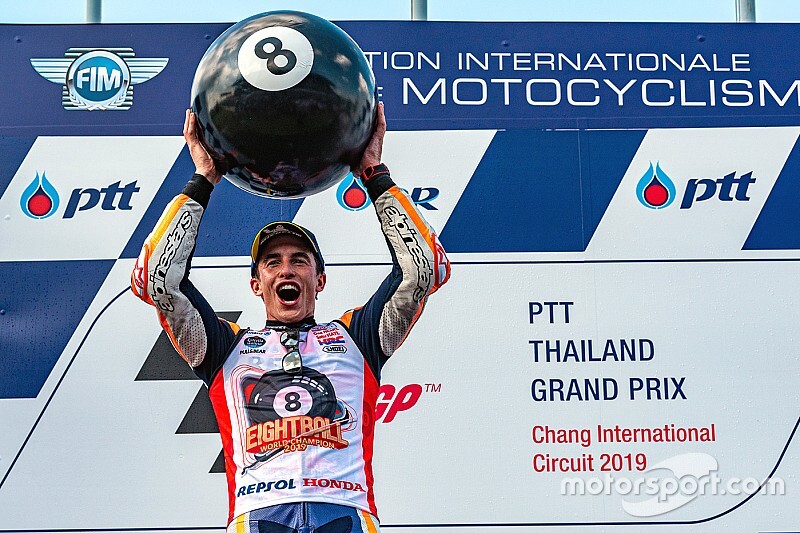 Newly-crowned six-time MotoGP champion Marc Marquez said that his 2019 title campaign was even better than his run to the championship in 2014 - when he won the first 10 races of the season.

With 13 victories, 13 pole positions, 12 fastest laps and 362 points collected, Marquez's 2014 campaign remains his strongest one statistically, but several of the metrics could yet be eclipsed before the end of the current season.

The 26-year-old has put together a near-perfect run this year as he has finished every race - except Austin where he crashed - in the top two, and has collected nine wins already, clinching the title with four rounds to spare.

Marquez called this year his best season in MotoGP yet, due to the much more competitive field - as while 2014 was massively dominated by the factory Hondas and Yamahas, this year four different bikes were able to win races.

"It is my best season in MotoGP," said Marquez. "2014, okay, 13 [wins], but honestly speaking, there was a big difference between the level of manufacturers, bikes.

"Now we are in a very competitive category with four different manufacturers you can fight for a victory.

"They are able to do it and this is one of the most important things.

With the 2019 title wrapped up, 2015 remains as the only year Marquez failed to win the MotoGP title.

Marquez said that consistency was his main issue back then, having crashed in six races, but he's been working on that ever since, which has now culminated in an extremely consistent 2019 campaign.

"Sometimes you need to do one step behind and two in front," he said when asked about his sole title defeat by Motorsport.com.

"I still feel young but in 2015 I was 22-23, I didn't have the experience, I learned a lot about that year because I crash many times in the races.

"Then I say 'okay, what is my weak point? It is consistency?' Every year I try to work but sometimes it is so difficult to change from one year to the other one.

"Especially this year my strongest point was consistency so this means a lot about how we work with all the team."