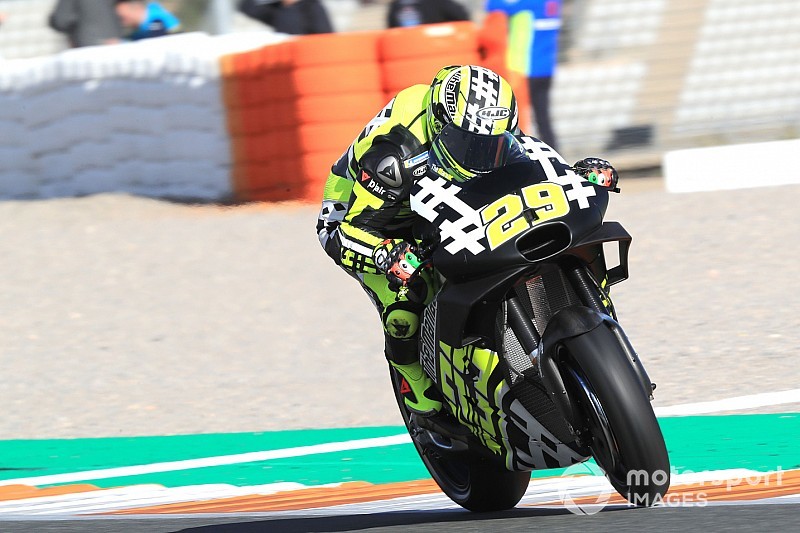 New Aprilia MotoGP recruit Andrea Iannone said he expected the RS-GP bike to be "worse", but has identified areas where it needs to be improved.

Iannone joins Aprilia from Suzuki in 2019, the Italian making his debut with the Italian manufacturer in the two-day Valencia post-season test.

He was 19th on Tuesday, having completed just 15 laps, and then took 18th on Day 2, ending up 1.3s off the pace and seven tenths slower than teammate Aleix Espargaro.

Iannone also crashed twice on Day 2, but regardless he said he "expected worse" from his new machinery.

"We have many positive things, also we have negative thing but the negative point are really clear for me and also now for the engineers.

"I think I arrive with many information many experience and we will see, we know in which area it is important we work, is really clear."

Iannone said he needs to improve "from half-corner to exit", but said that he hasn't changed anything on the bike during the test.

"[The bike has a] good base but is important we adjust the bike at my style," he explained. "We start with Aleix's set-up, he rides a little bit different compared to me and we don't change the first two days the set-up or the situation.

"We focus to ride, ride, ride, we try to adjust something on the electronics side, we understand all the situations.

"We learned today and yesterday, I think the best way for start. From half-corner to exit, I need something different."

Espargaro led Aprilia's efforts on both days of the Valencia test, taking seventh and 10th respectively.

The Spaniard tested a new engine on Tuesday and a chassis on Wednesday, and while he liked the former, he said the latter "didn't convince me".

"Engine, let's say is one step more in the direction that the engine I use from Misano test," Espargaro said at the end of Day 1.

"Immediately I felt good, not bad. With the used tyre I was three-four tenths quicker so was a little bit shock.

"The feeling I had is with this engine is not more power but the connection with the throttle is a little bit smoother and the traction looks slightly better so maybe they will allow us to use more power. Next step has to be to find more power.

"I tried a new frame [today] and was not super good, didn't really convince me but I will try in Jerez.

"We know exactly where we have to work, I talked a little bit Andrea and he had the same problem as me so this is positive."