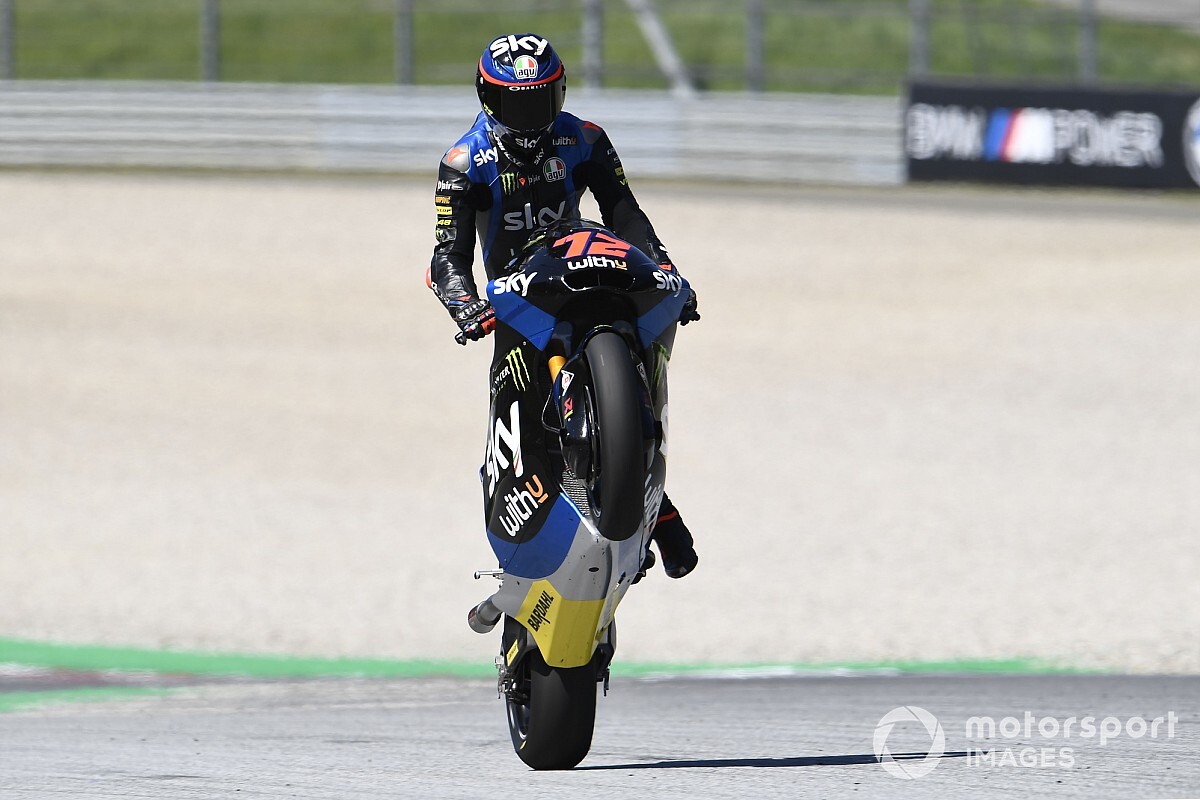 Jorge Martin was robbed of a Styrian Grand Prix Moto2 victory after he exceeded track limits on the last lap, gifting a maiden win to VR46 rider Marco Bezzecchi.

The Austrian GP winner fended off Bezzecchi by 0.060 seconds having led the entire 25-lap Red Bull Ring, but ran off track on the exit of Turn 8 on the final tour, which is an automatic one-place drop in the Moto2 rule book.

Martin grabbed the holeshot from maiden poleman Aron Canet on the run to the first corner, with the sister Ajo KTM of Tetsuta Nagashima slotting into third.

A moment for Remy Gardner at Turn 3 broke up the lead group, with Martin, Canet and Nagashima opening up a slight advantage.

A crash for Aspar rookie Canet at Turn 4 on lap two left Martin to lead teammate Nagashima, with Gardner some eight tenths adrift.

By lap six, Gardner had recovered the gap and was putting some pressure on Nagashima, while Bezzecchi was charging through to try and get on terms with the podium battle on his VR46 Kalex.

Gardner made his move on Nagashima for second on the 11th tour, which allowed Martin to open up his lead to a second, while Bezzecchi moved up to third on the following lap.

Martin’s advantage extended to 1.6s over the next few laps, with it growing to over two seconds when Bezzecchi and Gardner locked horns over second.

The VR46 rider got the run on Gardner into Turn 3 on lap 16, but the Australian was late on the anchors on his SAG machine and forced Bezzecchi to repeat his move down into Turn 4.

Once ahead of Gardner, Bezzecchi was able to put a few bike lengths between the pair and began to erode Martin’s lead.

Bezzecchi got the gap down to 1.5s on lap 19, with it dipping underneath a second for the first time two tours later.

As they started the final lap, Martin’s lead stood at just three tenths over the hard-charging Bezzecchi.

Martin was brilliantly defensive over the final lap and denied Bezzecchi on the run to the line before being demoted to second for exceeding track limits on the last tour.

Gardner completed the podium for the first time this season, with Nagashima and Tom Luthi (Intact GP) rounding out the top five.

Xavi Vierge was sixth on the Petronas Sprinta Kalex ahead of Luca Marini, who holds an eight-point championship lead over Martin and 10th-placed Enea Bastianini.

Jake Dixon (Petronas Sprinta) and Pons’ Hector Garzo slotted in between Marini and Bastianini at the finish.

Marc VDS’ Sam Lowes was given the black flag for causing a collision with Somkiat Chantra (Honda Team Asia) and Speed Up’s Jorge Navarro at Turn 3 on lap three – though the Briton crashed on the following tour just as the Race Direction message came through.