When Lamborghini produces its LMDh contender to contend for overall Le Mans 24 Hours honours in 2024, it will be hoping its efforts are more successful than when the famous Raging Bull logo was last seen on the grid.

In fact, the Bologna marque’s last stint at La Sarthe was little short of disastrous in terms of results, as its Murcielago-derived GT1 contender failed to register a classified finish in five attempts between 2006 and 2010.

Central to this story is the Japanese-based JLOC (Japanese Lamborghini Owners’ Club) team and its chairman, Isao Noritake, which ran the Murcielago on four of those five attempts, but with very little to show for its efforts.

JLOC’s story is an interesting one, as it has its roots in Lamborghini’s Formula 1 engine programme of the late 1980s and early 90s. The team was formed in 1994 to contest the newly-formed All-Japan GT Championship, the forerunner to modern-day SUPER GT, where Noritake’s team continues to compete with a pair of Huracan GT3 Evos. 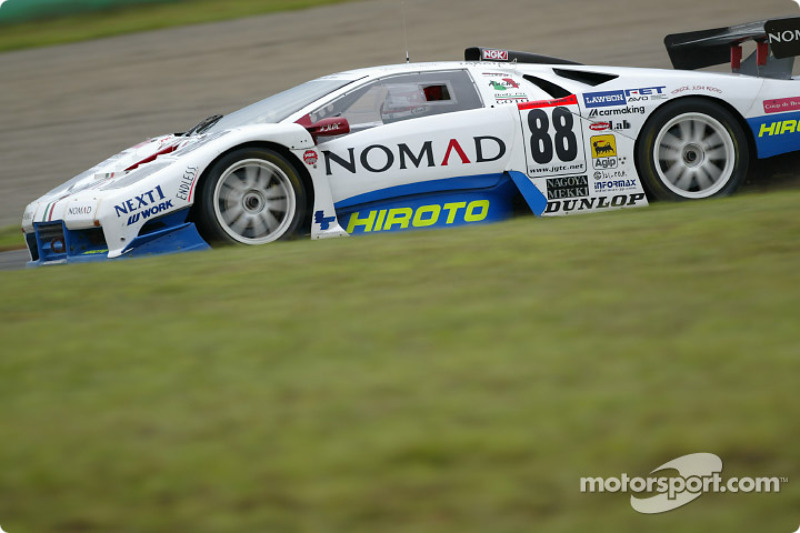 "In 1989 at the Japanese Grand Prix, I co-ordinated the hotels, rental cars and everything for the F1 team," recalls Noritake with fondness. "The project ended after 1993, and the following year the JGTC started.

"Some of the staff that were with the F1 team, they created our Diablo GT500 car (pictured above). So I got stuck on this path and I can’t escape!"

After years of campaigning the Countach, and then from 1995 the Diablo, in the upper GT500 class of the JGTC with little success, in 2004 the team was able to get its hands on an example of the Murcielago R-GT that had been developed for the FIA GT Championship jointly by Audi Sport and Reiter Engineering, marking the start of JLOC’s Le Mans ambitions.

But, according to Noritake, the Murcielago was essentially born bad - the result of Audi losing interest relatively early in the project. As such, there was never any factory support for JLOC despite the fact it was Lamborghini’s sole representative at Le Mans.

"Initially, Audi Sport was going to make the car [Murcielago GT1], but then pulled out and Reiter Engineering handled it," recalls Noritake. "For that reason, the car struggled from the beginning.

"We had never had support from the manufacturer, and we couldn’t update the car. It was really an unlucky car. Reiter wasn’t able to develop it properly. The differential, the transmission… because there were only one or two cars racing, it was very hard to do any real development."

Having failed to get an entry in 2005, JLOC first appeared at La Sarthe in 2006 with Marco Apicella, Yasutaka Hinoi and Koji Yamanashi sharing driving duties. Apicella and Hinoi had given the Muricelago a first win in international competition at Suzuka that year, but Le Mans would prove to be a rather more complicated proposition. 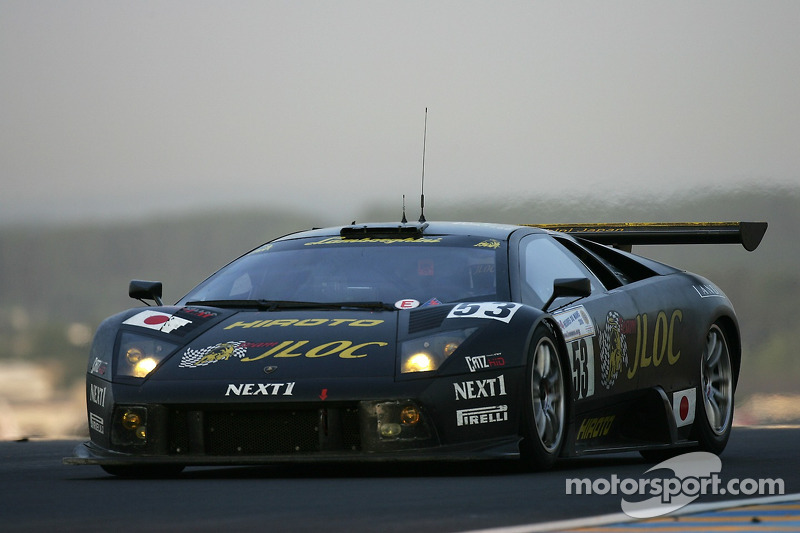 Delayed by around 40 minutes for engine issues and then an exhaust problem, JLOC was on for at least a solid finish, but Yamanashi ground to a halt on track with around three hours left on the clock and 283 laps on the board. Had the team completed the final lap, that would have been enough for 23rd overall and eighth in GT1, but instead they were unclassified.

That proved to be the furthest a Murcielago would ever go at Le Mans. The following year, JLOC were back with support from DAMS and a revised line-up, with Hinoi making way for Atsushi Yogo alongside Apicella and Yamanashi. But in first qualifying on Wednesday, Apicella suffered a major crash at the first Mulsanne chicane.

Frantic efforts to source spare parts, including a fresh chassis, were made on Thursday. Although the use of a spare car is traditionally not allowed at Le Mans, Noritake lobbied the ACO successfully for an exemption, as the team had been able to source a Murcielago R-GT, fitting its spare engine and gearbox and salvaging what parts it could from the original car (the team’s SUPER GT cars were being shipped to Malaysia for the following weekend’s Sepang race and were therefore unavailable).

With Apicella in hospital, Yogo and Yamanashi prepared to take on the race as a duo, and remarkably the team was able to prepare the car in time for Saturday’s warm-up session, running without problems. And yet, come the race, the car managed just a single lap before stopping due to a broken driveshaft, a cruel end after the team’s hard labours. 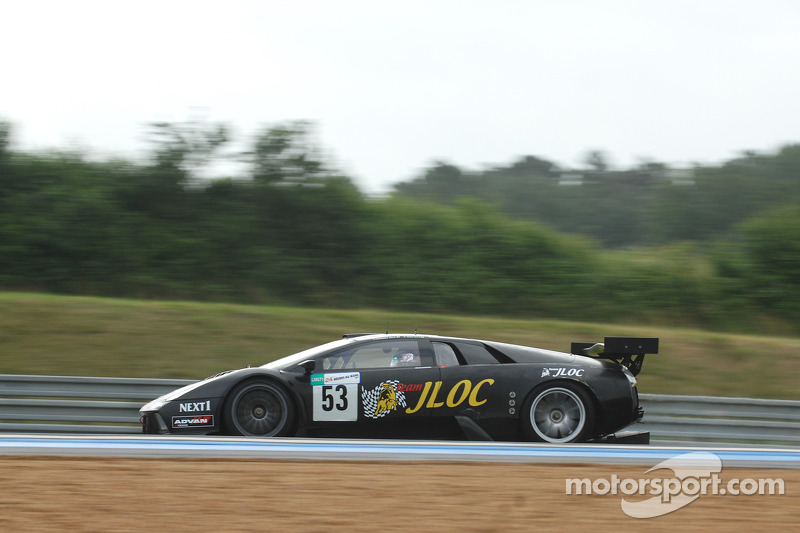 JLOC didn’t have its application for an entry in 2008 accepted, leaving IPB Spartak Racing to represent Lamborghini at Le Mans that year. The Murcielago again was plagued by technical issues that meant the Russian-flagged squad came up an agonising one lap short of the necessary race distance (70 percent of the winner) for a classified finish.

In 2009, JLOC was back with two-thirds of its 2007 line-up, Apicella and Yogo, and a newcomer, Yutaka Yamagishi. The team managed just 400 metres in first practice before suffering a driveshaft problem that put the team out for the rest of the day amid a delay in sourcing replacement parts, and further niggles on Thursday, including a computer malfunction and broken spoiler, meant the team failed to qualify for the race.

On Friday, the team’s failure to qualify prompted Apicella and a number of mechanics to head home. However, the ACO once again made an exception for the team and allowed the team to take the start of the race. After a rush to acquire spare parts for the race, the team found it was missing one worth 20,000 yen (approx $200) and instead of risking it with its reduced crew, it elected to pit and retire the car after just a single lap.

Later that year, JLOC won the 2009 Okayama 1000km, the inaugural Asian Le Mans Series event, booking their place on the grid for Le Mans at 2010. Yogo and Hiroyuki Iiri, the winning crew from Okayama, were joined by a returning Yamanishi. 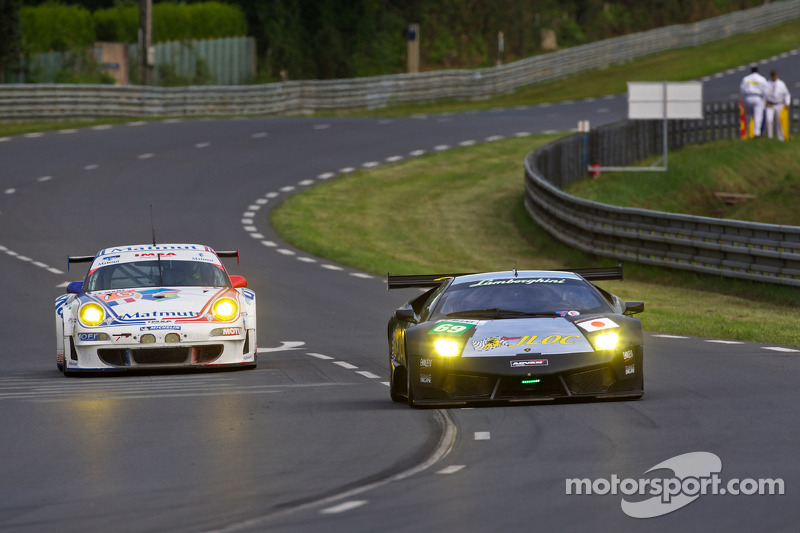 Armed with an updated version of the car, the LP670 R-SV, and with Okayama still fresh in the memory, hopes were high for a first classified finish. But from the get-go the team suffered with recurring punctures with its Yokohama tyres, and an early blow-up while Iiri was at the wheel left the car with considerable damage at the rear that took several hours to repair.

After that, there were further long delays due to transmission problems, and the team lost so much time that a classified finish had become impossible. JLOC threw in the towel with 138 laps on the board.

With the GT1 class disappearing from Le Mans after 2010, that marked the end of the JLOC story at La Sarthe, with the team focusing exclusively on its SUPER GT programme after that. But with GT3 cars set to be allowed on the grid from 2024 onwards, the team is already preparing to make its return - and hopefully put in a stronger showing than it managed with the ill-fated Murcielago.