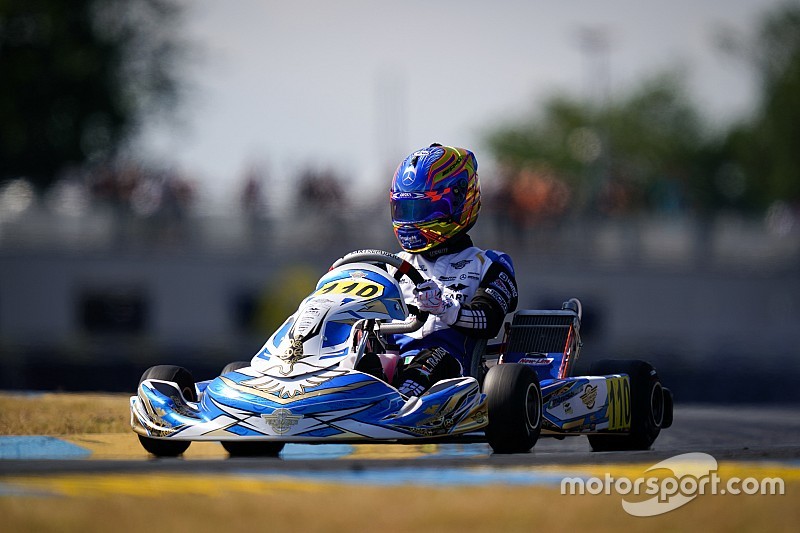 Travisanutto, who is also the reigning European champion in the OK class, is the first driver to take back-to-back world titles since current Formula 2 points-leader Nyck de Vries triumphed in 2010 and 2011.

The 20-year-old Italian was up to second on the opening lap of the race when Dilano Vant'hoff and Gabriel Bortoleto both crashed out at the same corner from second and fourth respectively.

Travisanutto was running behind local hero Juho Valtanen for a handful of laps before he closed in on the Finn and made a move.

But Travisanutto couldn't shake off Valtanen, as well as Taylor Barnard, and the Finn soon started to mount a fightback.

He tried to overtake for the lead at the first corner of the circuit but Travisanutto defended aggressively and they made contact, for which the Italian was given a warning flag.

It was Barnard making a move next as he slightly nudged Valtanen wide at Turn 1 and stole second.

Valtanen then couldn't keep Thompson and Smal at bay either and dropped to fifth over the course of a single lap.

These fights allowed Travisanutto to pull away by over half a second and he was able to keep that advantage until the chequered flag, with Briton Barnard securing second in a similar fashion.

Red Bull protege Thompson completed the podium from 15th on the grid as Smal and Valtanen made up the top five.

Sebastian Montoya, son of former F1 driver Juan Pablo, was up to 13th from 23rd by Lap 11 before he retired.

Ten Brinke, who was third in the European championship, started from the front row and took the lead at the start with only Wharton keeping up with him.

And when Wharton's kart slowed four laps into the race, his Ricky Flynn Motorsport-run rival suddenly had a lead of over a second.

Brazilian Rafael Chaves Camara was second behind Ten Brinke but he was never able to close the gap to challenge the leader during the 21-lap race.

The duo took first and second, separated by 2.1s, with Kajus Siksnelis taking an impressive third from 16th on the grid.

The Lithuanian gained most of his positions in the early stages and then pulled off moves on Laurens Van Hoepen, European champion Andrea Kimi Antonelli and Josep Marti to take third.

Marti settled for fourth with Antonelli, driving for the Rosberg Academy Team, completing the top five.

Sons of former F1 drivers, Lorenzo Patrese in the OK as well as Brando Badoer and Enzo Trulli in the OKJ class, were entered in the event but none of them qualified for the finals.