The result marked Wilson’s seventh consecutive top-10 finish at the temporary Florida street circuit – having finished among the top-10 in each of his St. Pete race starts. 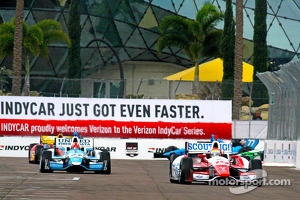 Wilson started the race from deep in the field after mixed track conditions and a balky shifter during qualifying kept him from showing the true potential of his Dale Coyne Racing machine. Beginning the 110-lap race on the alternate red tires, Wilson made quick work of moving forward to run 12th prior to the team’s first pit stop.

An alternate pit stop strategy saw Wilson pit for a routine stop of fuel and tires on Lap 19 under green flag conditions. He returned to the track with the Firestone sticker red tires mounted on the No. 19 Boy Scouts of America Honda and he continued to work his way forward up into the fifth position during a long green flag run.

Dale Coyne Racing engineer Michael Cannon called Wilson to pit lane for his second stop just before the half-way point of the race and Wilson relinquished his fifth place spot and took to pit road for fuel and black Firestone tires. He emerged 11th in the order and once again made his way forward to run eighth in line.

Just when Wilson was about to pit for his final stop of the race, a full course caution was displayed with 35 laps to go which closed the pit lane. Once the pits were back open under the yellow, Wilson made his final stop for fuel and Firestone red tires.

Wilson made up two positions on the restart, but the race went immediately back to full course caution due to an incident further back in the field. Upon the final restart, Wilson ran eighth and spent the final 15 laps in a tight battle fighting for the seventh position and ultimately took eighth at the checkered flag.

“We made some big improvements in the warm up this morning and I really felt we had a strong car to get after it,” said Wilson, whose intense fitness regimen over the off season had him well-prepared for the long green flag stints around the physically demanding St. Pete street course. “The Boy Scouts of America car was running pretty good. The Dale Coyne Racing guys did a great job giving me the clear track early on because the car was fast. I was just hoping to get a bit more of a clear track! It seemed really difficult to get by people today. With the alternate strategy, we were running hard in clean air and I was just trying to make the most of it. At one stage I was managing fuel, managing tires and managing the brakes, as well as trying to run as fast as I could! So it was a tough balancing act trying not to use up too much of the car early on.”

Wilson will be back in Verizon IndyCar Series action in about a month as Round 2 of the 2014 championship is scheduled for April 27 at Barber Motorsports Park.