Power surges into history books with St. Pete win: Will Power and Gordon Johncock now have something more in common than 20-plus Indy car victories. 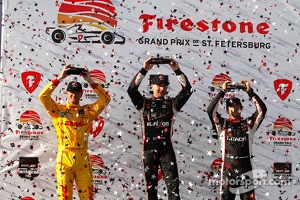 Power backed up his efforts on the temporary course in Houston and the 2-mile Auto Club Speedway in October with a dominating victory in the season-opening Firestone Grand Prix of St. Petersburg.

It's a modest streak in sports, but taken in the context of the Verizon IndyCar Series' depth of competition it's nonetheless impressive.

Power has also won four of the past six races, whereas registering four top-five finishes in the preceding 14 races.

"You definitely start to look pretty hard when you have a long period of not winning," said Power, who won for the second time at St. Petersburg. "You just can't get complacent. You've got to keep working hard, especially in this series. There's so many good teams, good drivers.

"You just reset, just realize that you can't leave anything on the table. I was speaking to Mark Webber at some point, 'Did you lose a little bit of motivation in your 30s?' He said to me, 'You can't kid yourself. You've got to work hard. It's just the way it is. If you're not, someone else is.'

"That's true. You got to get everything right in this business or you won't win."

Power won three consecutive races in 2012, and will aim be the 10th Indy car driver to make it four in a row April 13 in the 40th Toyota Grand Prix of Long Beach. Sebastien Bourdais in the 2006 Champ Car season was the last to win four consecutive races.

Reigning Verizon IndyCar Series champion Scott Dixon, who finished fourth in the opener, Michael Andretti and Johnny Rutherford each have nine consecutive winning seasons. Helio Castroneves, runner-up to Dixon in the championship last season and who started this season with a podium, is the all-time leader with a win in 12 consecutive seasons (2000-2010).

With the early points advantage, Power can set his sights on the two goals he treasures most: winning his first Indianapolis 500 and his first series title.

"Sometime years I've started here and been so conservative," Power said. "I just want to race, race hard, and I want to win. That's the only way to think of it, not think of points. I want to win a championship, but I like winning races. Hopefully the two come together and it happens."

A footnote: Al Unser had quite a run in 1970 and '71, and only Swede Savage in the 1970 finale on Nov. 21 at Phoenix interrupted Unser's streak of eight wins in the nine races over the two USAC seasons. Unser, who started from the pole on the one-mile oval, finished second in the 150-lap race in the No. 2 Johnny Lightning 500 Colt/Ford TC. He kicked off 1971 with consecutive wins at Rafaela, Argentina (doubleheader) and Phoenix.

Numbers to note following the Firestone Grand Prix of St. Petersburg -- the opening round of the 2014 Verizon Indy Car Series season.

1.98 - Average running position of Will Power for the 110 laps of racing at St. Petersburg.

2 - Drivers who have won at St. Petersburg more than once - Helio Castroneves (3 wins) and Will Power (2 wins)

8 - Consecutive Indy car seasons with at least one victory for Will Power.

12 - Finishing position of Mikhail Aleshin, the highest-placed Sunoco Rookie of the Year candidate.

13 - Positions improved by Josef Newgarden (22nd to ninth), most of any driver in the race.

22 - Wins for Will Power, which ties Emerson Fittipaldi and Tony Bettenhausen for 19th on the all-time list.

25 - Laps in which Sebastien Bourdais improved his position - most of any driver in the Firestone Grand Prix of St. Petersburg.

50 - The lead Chevrolet earned in the Manufacturers' Championship standings by placing three cars in the top-five at St. Pete. Chevrolet leads Honda 122-72.

93.572 - Average speed of the race in mph, the fastest-ever Firestone Grand Prix of St. Petersburg.