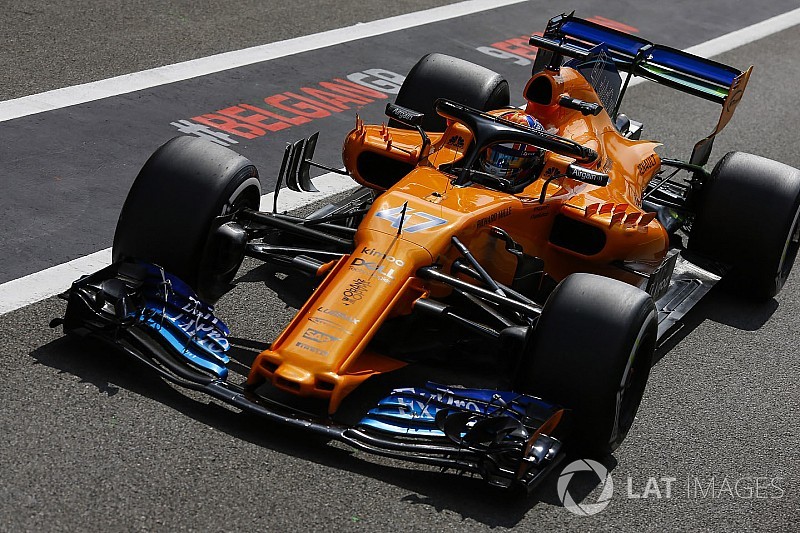 McLaren will run Lando Norris in the opening practice session for next week’s Italian Grand Prix at Monza as it continues to evaluate him for a 2019 Formula 1 seat.

Norris made his grand prix weekend debut at Spa on Friday, driving Fernando Alonso's MCL33 and outpacing the sister car of Stoffel Vandoorne.

McLaren sporting director Gil de Ferran said Norris, in the running for the second McLaren seat for '19, will get another outing at Monza next week.

"He did a great job," said de Ferran. "One thing he has is great adaptability to new situations, I've seen that in the tests he's had and also here.

"We wanted to bring him here as part of his development with a lower downforce level, more cars on track, track evolution and really give him that experience.

"It was the same thing, he came up to speed very quickly and did a fine job, not making any mistakes. He will be in at Monza as we look to help develop his skills."

Norris combined his FP1 debut with preparation for this weekend's Formula 2 races, as he fights Mercedes junior George Russell for the feeder series' title.

He finished fourth, one place behind Russell, and his FP1 run with McLaren at Monza next week will also take coincide with an F2 race.

Asked by Motorsport.com how Norris can impress in these outings, de Ferran said: "It's very hard to assess a driver in just one practice or qualifying session, you need to step back and take a wider view.

"The sessions are more to allow Lando to get more exposure, and help him along his development path."

In FP1 at Spa, Norris was 18th-fastest and 0.086s faster than Vandoorne, who was last after completing half as many laps due to multiple car problems.

Vandoorne was irritated at the end of the day and said: "Obviously they want to see how we compare but I think first of all the team should give a car that is able to run on track before we can really compare."

Asked by Motorsport.com how he reassured Vandoorne amid that frustration, de Ferran said: "I did the best I could, obviously it wasn't an ideal situation.

"He had a lot of problems in FP1 with the brakes and then a water leak, so you just have to bring perspective and understanding into the situation.

"To give Stoffel a lot of credit one of his strong points is his mind management, as my mentor Jackie Stewart would say.

"He's very strong in this way, he really keeps himself on an even keel."