Second row on the grid for Phoenix at the Nürburgring

Ingolstadt/Nürburg - The five Audi teams successfully finished their preparations for the 24-hour race at the Nürburgring in the top-30 qualifying session. All eight race cars had qualified for the shoot-out laps and three of them managed to leap into the top ten.

Four different marques in the top four positions of the grid underscore the competitiveness in the GT3 class this year. Phoenix Racing qualified for a second row as the best Audi team. With a lap time of 8m 14.117s, Phoenix driver Christian Mamerow in the shoot-out session improved the provisional qualifying time set by car #4 on a dry track the day before by 7.3 seconds. He will be tackling the race together with Christopher Haase, René Rast and Markus Winkelhock. The team of Ernst Moser, based in Meuspath, will also provide the second-best Audi on the grid at its home round: Frank Stippler achieved the sixth-best lap time. The 2012 winner is sharing car #3 with Marc Basseng, Marcel Fässler and Laurens Vanthoor.

The third Audi driver in the top ten was Pierre Kaffer. The professional race driver, who is sharing the cockpit with extreme athlete Felix Baumgartner, Frank Biela and Marco Werner, qualified in eighth place for the Audi race experience. 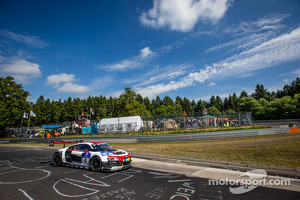 Prosperia C. Abt Racing in positions 12 and 19, G-Drive Racing in 17th place, the second car of the Audi race experience in 26th place and the Twinbusch Audi in position 28, completed the results for Audi on the first 14 rows of the grid. The starting order is, however, of secondary importance for the five squads. The crucial aspect was to have come up with a set-up in the practice and qualifying sessions that would give all the drivers a good base for the duration of the 24-hour race. The Audi teams also used the time up to the qualifying session for thorough technical preparations of their R8 LMS ultra cars for the 24-hour race.

The race will be started at 16.00 on Saturday. The fans lining the Nordschleife can look forward to a special appearance preceding the race, as Le Mans winner Marcel Fässler will be driving a lap on the Nordschleife in the Audi R18 e-tron quattro. On TV, the fans can watch the race for more than 15 hours on Sport1. The YouTube channel ADACZurich24hRennen and Fan TV that can be received on location via the DVB-T channel 27 are airing live broadcasts of Germany's major endurance race as well.

Romolo Liebchen (Head of Audi Sport customer racing): "Were generally pleased with the qualifying results. We’ve put ourselves in a good position. We deliberately didn’t battle for the fastest time because we didn’t want to take an excessive risk. The gaps in the field are close, which means we can expect to see an interesting race."

Christian Mamerow (Audi R8 LMS ultra #4/Phoenix Racing): "I was a bit surprised about how fast we can be on a single lap. I could hardly have driven any faster. The gaps up to position ten are very close. Our car felt good thank you for this to the team. Were thoroughly prepared, have got a good driver line-up and feel competitive."

Top ten qualifying for Aston Martin at the Nürburgring

Marc VDS fly to front row at 24 Hours of Nürburgring