Marc VDS fly to front row at 24 Hours of Nürburgring

Nürburgring, Germany – 20 June 2014: BMW Sports Trophy Team Marc VDS will start from the front row of the grid for tomorrow’s 24 Hours of Nürburgring. Maxime Martin, in the #25 BMW Z4 GT3 he shares with Jörg Müller, Uwe Alzen and Marco Wittmann, set an 8:13.497 for second position. Nick Catsburg managed 13th, with an 8:16.421. He will share #25 with Bas Leinders, Dirk Adorf and Markus Palttala.

The free practice and qualifying sessions had seen little running for the team. As they were happy with the set up for the cars, they decided to preserve them for the gruelling 24-hour race.

However, the biggest moment of the weekend so far came with the Top-30 qualifying, where the fastest 30 cars on the grid fight it out, one by one, for the best time on a nearly-empty track. It is one of very few times in the year any driver has a clear track here. 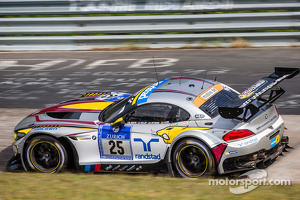 The opportunity was not wasted by Martin, who drove a storming lap to take second on the grid. His time was around three seconds shy of the fastest, though the team are confident the BMW Z4 GT3’s strength lies in consistency and race pace, not single lap spectacles.

Catsburg, who will make his debut in the 24 Hours of Nürburgring tomorrow, was able to set a competitive lap, comfortably within the top-20. He improved on both laps, and can now look forward to tomorrow.

Bas Leinders, Team Principal: “This is a good start for us. Max’s lap was excellent, in fact two real flyers – but we know what he can do! Nick did a great job. He’s debuting here at this event, but you would not know it from his performances and his calm head. The whole team is as prepared as they can be and, working with BMW Motorsport, I’m confident we can run strongly tomorrow and into Sunday. Let’s push for the podium – everyone has worked hard and they deserve a great result tomorrow.”

Nick Catsburg, BMW Z4 GT3 #25, 13th position: “It was awesome to do two totally clear laps here. Absolutely awesome. The car was amazing, so I had a really good time! All the BMWs did well, so it’s a good starting position for the race. My laps were right on the limit – I could not have gone much quicker. Looking at Max’s laps, and the laps from Schubert, I think we were pretty spot on. Tomorrow is the big challenge and now I just can’t wait to get going!”

Maxime Martin, BMW Z4 GT3 #26, 2nd position: “I’m happy, it was a good lap. I passed a Porsche on my quicker lap, so I think I lost a second, but at the end I think McLaren was too quick today. Front row, though, is a great way to start the race. The most difficult thing is still to come – 24 hours of this magnificent track. It’s a great opportunity, really nice to be alone on the circuit and to explore all the possibilities. It was a good day, and I hope even better is to come.”

Second row on the grid for Phoenix at the Nürburgring

Strong start for Marc VDS in the Eifel