Four of the six Audis were entered in Class A GT3 Outright, a class for the newer GT3 machinery.

The 2014 Bathurst 12 Hour proved to be another very exciting race and concluded with three Audi R8 LMS ultra cars within the overall top ten. 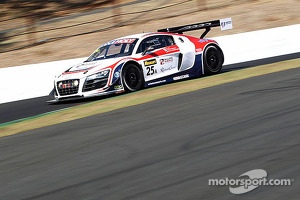 Proceedings kicked off with four practice sessions on Thursday and three qualifying sessions on Friday. The first qualifying session was overshadowed by two red flag periods, one of which was caused by the #5 MPC Audi R8 LMS ultra. Jason Bright suffered a heavy crash and the car was withdrawn from the weekend. Fortunately Jason Bright was unharmed and has been cleared from the hospital. He stated via his official Facebook page: “Gutted for the rest of the Sqwirk team. @WazzaLuff , Rod Salmon, Liam Talbot and the guys at Melbourne Performance Centre.” The #5 Audi R8 LMS ultra of Rod Salmon, Warren Luff, Jason Bright and Liam Talbot did not take part in the race due to the sustained damage of the car, despite qualifying thirty-first with their lap time before the crash during the session.

The remaining three Audi R8 LMS ultra cars (Class A) all placed within the overall top ten, in positions seven through nine. The leading Audi on the grid was the #9 MPC Audi, ahead of the #3 Phoenix Racing R8 LMS ultra and the #25 United Autosports R8 LMS ultra in ninth.

An early morning 06:15 start greeted the teams on for a very exciting race on Sunday morning. The five Audi R8 LMS and ultra cars ran well and began moving forward through the field. A number of issues then began dropping the Audi runners back during the long twelve hour race. Phoenix Racing emerged as the highest Audi runner, running in the top half of the top ten, followed by the Audi R8 LMS ultra cars from MPC and United Autosports in the lower half.

Both of the front running Class B Audis suffered technical issues. Rotek Racing retired and Equity-One Motorsport were forced to slow their pace and nurse the car home, finishing sixth in class and fourteenth overall.

The Class A Audis soldiered on to the end and all three finished within the top ten. Phoenix Racing finished fifth after a safety car period during the closing stages. They finished ahead of United Autosports in sixth and Melbourne Performance Centre (#9) in tenth.