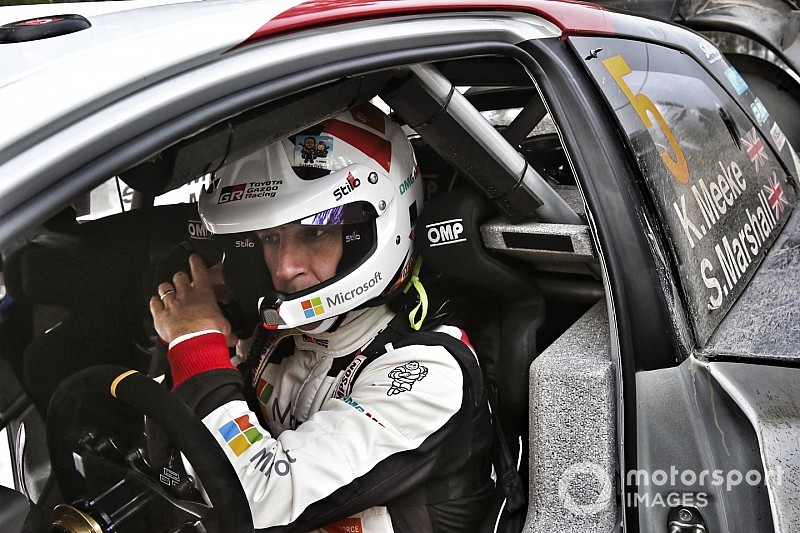 Toyota WRC driver Kris Meeke has issued a public apology to Citroen for allegations that it had influenced a stage stoppage on Rally Mexico.

Meeke briefly took the lead of the event on Saturday when Citroen's Sebastien Ogier slowed with a puncture.

But Ogier's time loss was minimised because the stage was red flagged due to his team-mate Esapekka Lappi's car being judged to be in an unsafe position after a spin that left it beached.

Ogier was awarded a nominal time that kept him in second place, and he retook the lead when Meeke sustained a puncture of his own and incurred suspension damage on the next stage.

The stage was red-flagged despite two cars having successfully made it past Lappi's Citroen before the stoppage, and Lappi himself having pressed the green button in his car – signifying that he was OK – rather than the red button to request a red flag.

That prompted Meeke to angrily question Citroen's tactics, before rally organisers made clear that the stoppage had been their decision and had not been influenced at all by Ogier's team.

“I sincerely want to apologise from the bottom of my heart to everyone in the Citroen team,” said Meeke in a video issued on his social media channels following the rally finish. “I made some bad comments, I shouldn't have said the words 'dirty tactics'.

“In the heat of the moment, when it's like that, with so many things that were coincidences, it was hard to imagine what had happened. But I sincerely apologise.”

Meeke eventually finished fifth on the event, while Ogier stayed ahead to the finish and is now up to second in the WRC standings behind Ott Tanak.